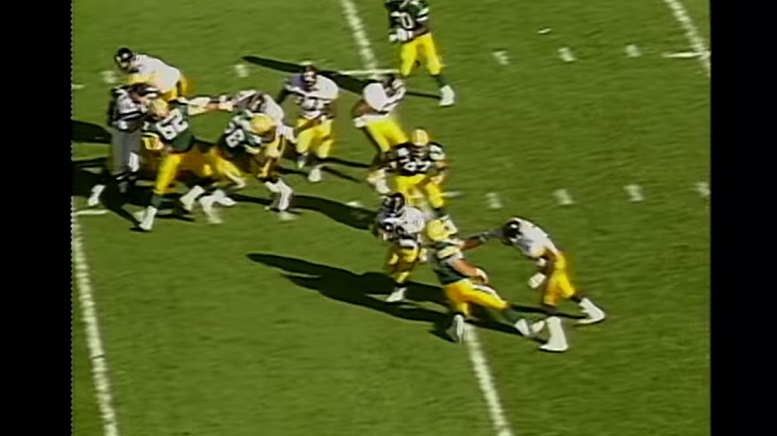 The Pittsburgh Steelers have certainly had more than their fair share of big offensive plays in the history of the franchise. In this Summer of 2020 offseason series, I’ll highlight and recap for you the biggest Steelers offensive plays by regular season from the last 50 years. Most of these posts will include video of the play in question along with a few details and sometimes dated newspaper clippings.

This series now continues with the Steelers longest offensive play of the 1992 regular season, which came in Week 4 against the Green Bay Packers and at Lambeau Field in Green Bay, WI on September 27. The play, a 69-yard run to the left side by running back Barry Foster, came roughly midway through the second quarter and on a second-and-7 from the Steelers 23-yard-line. The Steelers were tied with the Packers at the time, 3-3.

The running play, a draw, included a great block by Steelers left tackle John Jackson on Packers outside linebacker Bryce Paup. That block, along with nice interior blocks by Steelers guard Duval Love and center Dermontti Dawson, created a nice lane for Foster and he was off to the races to the left side of the field.

The first contact that Foster encountered on his long run came at the Packers 32-yard-line and in the form of Green Bay cornerback Vinnie Clark. Foster, however, powered through Clark’s tackle attempt. Ultimately, Packers safety Terrell Buckley, who had been fighting for several yards to get off a block by Steelers wide receiver Dwight Stone, got Foster down and out of bounds at the Green Bay 8-yard-line.

That tackle of Foster by Buckley wound up being big as not only did the Steelers offense stall three plays later despite being goal-to-goal deep in Packers territory, Pittsburgh kicker Gary Anderson has his fourth down 20-yard field goal attempt blocked by Clark.

The Steelers went on to lose that road game to the Packers 17-3. Foster rushed for 117 yards on 12 carries in that loss to the Packers and that 69-yard-run would be the longest play from scrimmage of his NFL career.

Below is a video of Foster’s run against the Packers in addition to a video that recaps that game.