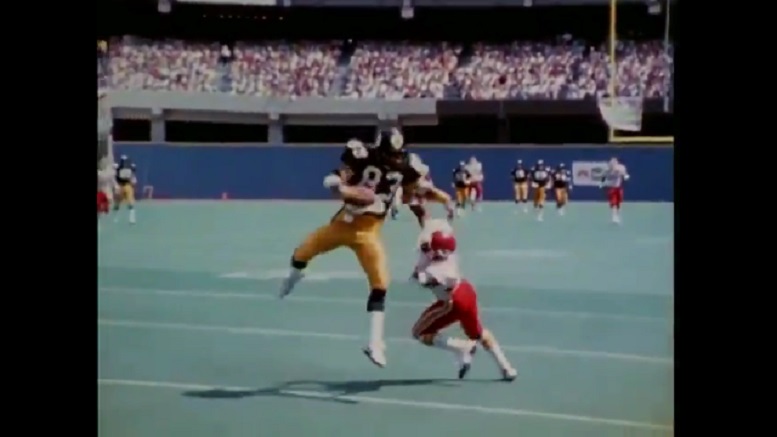 This series now continues with the Steelers longest offensive play of the 1984 regular season, which came in Week 1 against the Kansas City Chiefs and at Three Rivers Stadium in Pittsburgh on September 2. The play, an 80-yard pass completion for a touchdown from Steelers quarterback David Woodley to wide receiver Louis Lipps, came on a first-and-10 play with 8:20 remaining in the second quarter and with the Steelers trailing the Chiefs 17-3.

On the play, Woodley threw deep to Lipps down the left sideline and the rookie wide receiver out-battled Chiefs cornerback Kevin Ross for the football at the Kansas City 35-yard-line. With Ross on the ground and the football safely in Lipps’ hands, the wide receiver still had one Chiefs player to beat as safety Deron Cherry seemingly looked like he had a good enough angle to prevent the big play from culminating in a touchdown. Lipps, however, out-juked Cherry with a nice stutter-step move at the Chiefs 20-yard-line and easily ran into the end zone for the touchdown, the first of his NFL career.

Lipps added a second touchdown reception later in the fourth quarter via a 21-yard pass from backup quarterback Mark Malone. Lipps ended the game having registered six receptions against the Chiefs for 183 and two touchdowns. It would ultimately be the most receiving yardage he would have in a game for his entire NFL career.

As for Woodley, he was knocked out of the game early in the second half with a concussion. He finished having completed 11 of his 17 total pass attempts for 225 yards with two touchdowns and an interception.

The Steelers lost that Week 1 home game to the Chiefs 37-27 and they never held the lead at any point during the contest.

Below is a video of Woodley’s long touchdown pass to Lipps against the Chiefs in addition to another short video that recaps the entire game.