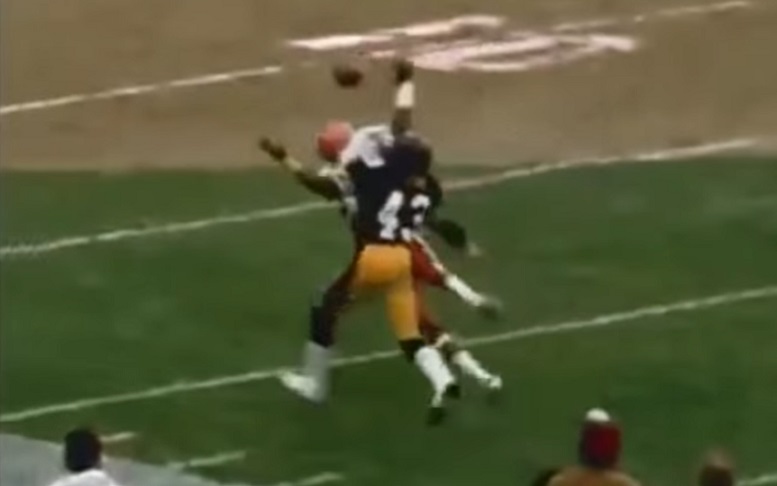 This series now continues with the Steelers longest offensive play of the 1977 regular season, which came in Week 3 against the Cleveland Browns and at Municipal Stadium in Cleveland on October 2. The play, a 65-yard completion from quarterback Terry Bradshaw to wide receiver Frank Lewis, came sometime in the second quarter and on a second-and-10 from the Steelers 35-yard-line. The touchdown tied the game at 14-14.

On the big second-down play, Bradshaw threw deep to Lewis down the left sideline. The pass, however, was a bit under-thrown and Browns rookie cornerback Oliver Davis seemed to be primed to intercept it as he had better positioning than Lewis at the Browns 23-yard-line. Davis, however, had the football bounce off his hands and the deflection wound up in the hands of Lewis at about the Browns 19-yard-line. After Lewis caught the deflected pass, he glanced off a tackle attempt by Browns safety Thom Darden and then easily ran the remaining 19 yards for a touchdown.

“I tried to go over Davis, and we both kind of hit the ball in the air when we bumped,” Lewis said after the game, according to the Pittsburgh Post-Gazette. “It hit off of us again and it must’ve been the third time that it dropped outside. I was looking for it all the time.”

Davis also talked about the big play after the game was over as well.

“I just lost control of the ball,” Davis explained, according to the Akron Beacon Journal. “By him and me fighting for the ball, it bounced up and he got a second chance at it and I didn’t. I guess I should’ve gone after the ball harder. It could’ve been a big play for us.”

That long 65-yard reception by Lewis was his only catch of the game. As for Bradshaw, he completed 10 of his 17 total pass attempts against the Browns for 143 yards with three touchdowns and two interceptions. His other two touchdown passes against the Browns went to wide receiver Lynn Swann and they were good for 5 and 14 yards, respectively. Swann finished that contest with seven receptions for 71 yards and the two touchdowns.

The Steelers beat the Browns 28-14 on that October Sunday in 1977 to move to 2-1 on the season as the Pittsburgh defense allowed just 165 total yards of offense and recorded five total turnovers.

Below is a video of the Bradshaw pass to Lewis in addition to a short video recap of the Steelers 1977 win over the Browns in Cleveland.