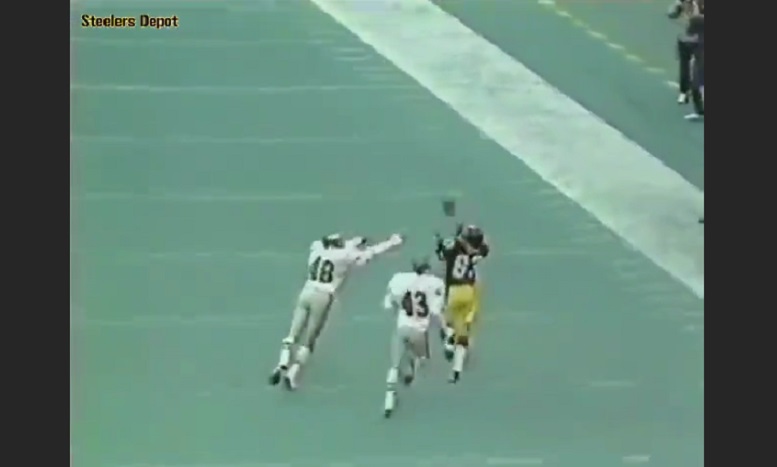 This series now continues with the Steelers longest offensive play of the 1988 regular season, which came in Week 11 of the season against the Philadelphia Eagles and at Three Rivers Stadium in Pittsburgh on November 13. The play, an 89-yard pass completion for a touchdown from quarterback Bubby Brister to wide receiver Louis Lipps, came on a second-and-9 play with 6:34 left in the third quarter and with the Steelers trailing the Eagles 17-16.

On the play, Brister audibled pre snap after getting a look at the Eagles defense. Lipps, according to newspaper report after the game, ran a hook-and-go route on the outside and was able to beat and stack Eagles cornerback Roynell Young on the outside with the safety Wes Hopkins in the middle of the field. After first giving a pump fake to Lipps. Brister moved to his right and then up in the process of uncorking a deep pass to Lipps.

The pass from Brister was beautiful and Lipps caught it over his head at around the Eagles 43-yard-line. Hopkins’ dive was unsuccessful as he was coming over from the deep middle of the field and Lipps easily waltzed into the end zone for the touchdown that put the Steelers ahead.

Brister and Lipps both talked about the big pass player after what ultimately became a 27-26 loss to the Eagles.

“What more can you ask?” Brister said after the game. “You dream of that. Anytime you see man-to-man coverage on Louis, you try to get him the ball. Louis made a great catch and a great move.”

Lipps also offered up a short synopsis of the play after the game.

“The defender bit on the hook a little, and the next thing I knew the ball was coming to me,” Lipps said.

Lipps, who also threw a 13-yard touchdown pass in the first quarter against the Eagles, ended the game with six receptions for 171 yards and a touchdown. As for Brister in the loss to the Eagles, he finished 11-of-25 passing for 226 yards with one touchdown and an interception.

At the time, that pass from Brister to Lipps was the second-longest touchdown pass in Steelers history. It also became and stayed the longest reception of Lipps’ NFL career.

Below is a video of Brister’s pass to Lipps against the Eagles.