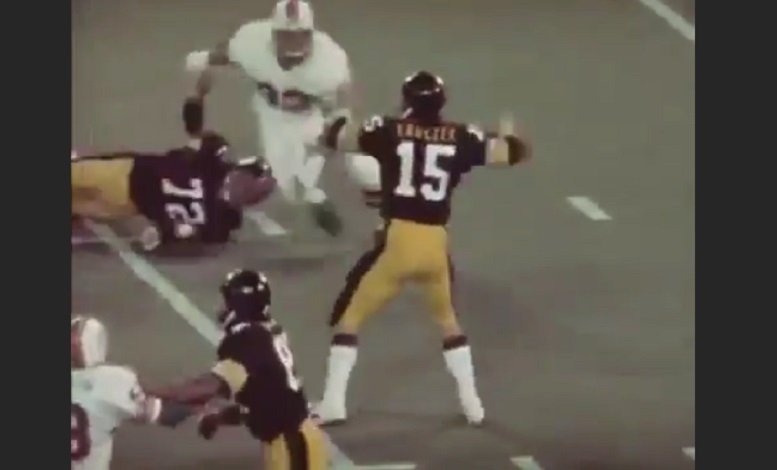 This series now continues with the Steelers longest offensive play of the 1976 regular season, which came in Week 10 against the Miami Dolphins and at Three Rivers Stadium in Pittsburgh on November 14. The play, a 64-yard completion from quarterback Mike Kruczek to wide receiver Frank Lewis, came sometime in the fourth quarter and on a third-and-7.

On the big third-down play, Kruczek connected with Lewis in the middle of the field and at the Steelers own 49-yard-line. Lewis ran pretty much uncontested after the catch down the left sideline and probably should’ve scored. However, the Steelers wide receiver stepped out of bounds at the Miami 1-yard-line.

“It’s just a circle pattern (across the middle) and the line gave good protection because I looked back and saw Mike standing up there in the pocket,” Lewis said about his big play after the game, according to the Miami Herald.

The Steelers rookie quarterback, Kruczek, also commented on that big pass play to Lewis after the game, according to newspaper reports.

“I looked at Frank, and I looked away and look back again,” said Kruczek. “Thank God I had enough time to look twice.”

While Lewis failed to score on the play, Steelers running back Reggie Harrison was able to score on a second-and-goal running play that followed the wide receiver stepping out of bounds. That touchdown, which was immediately followed by the extra-point by kicker Roy Gerela, put the Steelers ahead 14-3, which became the final score of the game.

Kruczek had to play against the Dolphins due to starting quarterback Terry Bradshaw suffering a wrist injury in the first quarter after just two pass attempts, both of which were incomplete. In total, Kruczek attempted just six passes in that win over the Dolphins for 102 yards. Lewis was on the receiving end of two of those four completed passes and finished with 75 yards receiving in total.

The Steelers running game certainly helped the team’s rookie quarterback as running backs Franco Harris and Rocky Bleier each rushed for 110 yards on 42 combined carries. The Steelers defense, however, is what really helped the team earn their first-ever franchise victory over the Dolphins as the unit sacked Miami quarterback Bob Griese five times in total and allowed just 144 total passing yards.

Below is a video of the Kruczek pass to Lewis in addition to a short video recap of the Steelers 1976 win over the Dolphins in Pittsburgh.