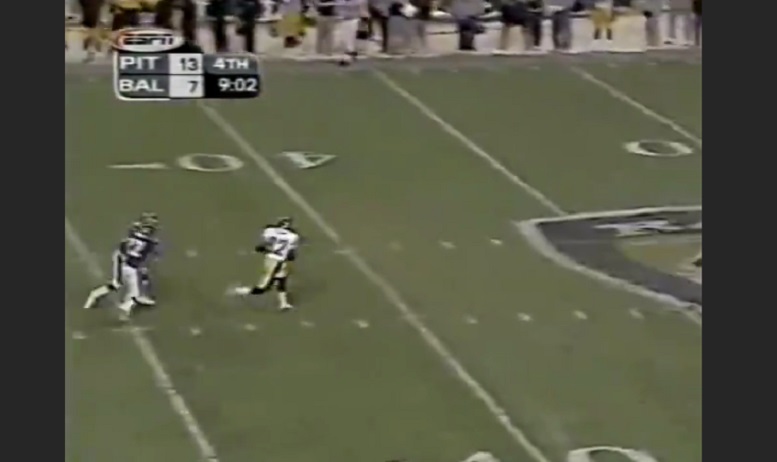 This series now continues with the Steelers longest offensive play of the 2001 regular season, which came in Week 14 of the season against the Baltimore Ravens and at PSINet Stadium in Baltimore, MD on December 16. The play, a 90-yard pass completion from quarterback Kordell Stewart to wide receiver Bobby Shaw for a touchdown, came on a third-and-7 play with 9:20 left in the fourth quarter and with the Steelers leading the Ravens 13-7.

On the play, Shaw, who was lined up on the right side of the formation and way inside the numbers on the field side, ran a deep post right to the middle of the field and between Ravens defensive backs Duane Starks and Rod Woodson. Stewart then proceeded to deliver a strike to Shaw right around the Steelers 35-yard-line right after the wide receiver had split the two defenders. After making the catch in stride, Shaw easily outraced Woodson the remaining 65 yards to the end zone for the touchdown.

“Rod [Woodson] bit up, and it left the middle for me to run the post,” Shaw said about the big play after the game, according to the Pittsburgh Post-Gazette. “Kordell threw a perfect ball.”

Stewart also talked about the touchdown pass to Shaw after the game.

“We may have thrown that during practice, and it was the ugliest pass and route ran all week,” Stewart said, according to the Baltimore Sun. “And we wound up scoring a touchdown on it.”

That long touchdown pass to Shaw tied the Steelers franchise record for the longest play from scrimmage and it was also longest play allowed at the time by the Ravens defense in the history of their franchise.

Shaw finished the game with two receptions for 100 yards and the long touchdown while Stewart ultimately ended that Sunday night road contest having completed 20 of his 31 total pass attempts for 333 yards and two touchdowns with no interceptions.

Below is a video of Stewart’s touchdown pass to Shaw against the Ravens in addition to a short video that recaps the game.