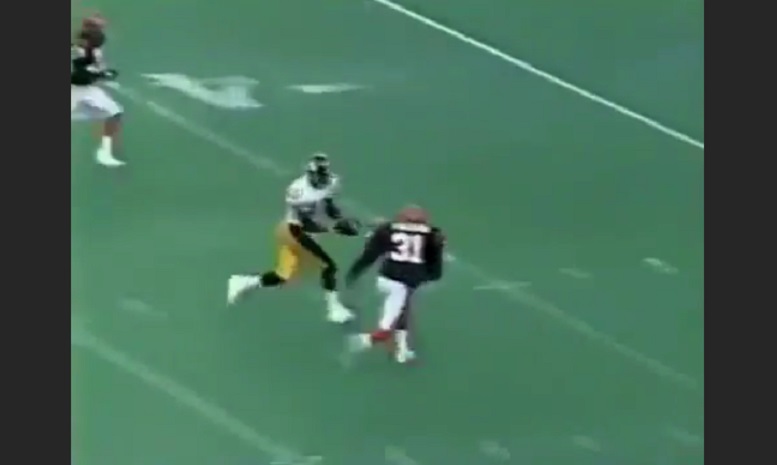 This series now continues with the Steelers longest offensive play of the 1995 regular season, which came in Week 12 of the season against the Cincinnati Bengals and at Riverfront Stadium in Cincinnati, OH on November 19. The play, a 71-yard pass completion from quarterback Neil O’Donnell to wide receiver/quarterback Kordell Stewart for a touchdown, came on a first-and-10 play with 14:25 left in the fourth quarter and with the Steelers trailing the Bengals 31-28.

On the play, Stewart, who was lined up in the slot on the left side, ran a seam route and O’Donnell connected with the rookie at the Bengals 43-yard-line. Stewart then immediately broke a tackle attempt by Bengals safety Darryl Williams and later he avoided diving cornerback Corey Sawyer inside the Bengals 10-yard-line on his way to scoring a touchdown.

“They caught us off beat with Stewart in the slot,” Sawyer said about the big play after the game, according to the Pittsburgh Post-Gazette. “We didn’t think he was going to run up the seam, but he did. He caught us slipping. Usually, he runs across the field or he runs an out route.”

Steelers wide receiver Yancey Thigpen talked about the play after the game as well.

“It was zone coverage, and they slid their safeties and it left in the middle of a field wide open,” Thigpen said. “Kordell took advantage of it. The safety was playing outside on the two receivers.”

The long touchdown pass from O’Donnell to Stewart essentially completed a huge comeback against the Bengals as the Steelers had trailed Cincinnati 31-13 with 10:31 left in the third quarter.

Stewart caught two passes for 86 yards in the Steelers 49-31 against the Bengals and the touchdown reception was the first of his NFL career.

As for O’Donnell, he finished that game against the Bengals having completed 24 of his 31 total pass attempts for 377 yards and three touchdowns. At the time, it was the second-most amount of passing yards in a game by a Steelers player and it ultimately was O’Donnell’s career high.

Below is a video of O’Donnell’s touchdown pass to Stewart against the Bengals in addition to another video that includes the full game.