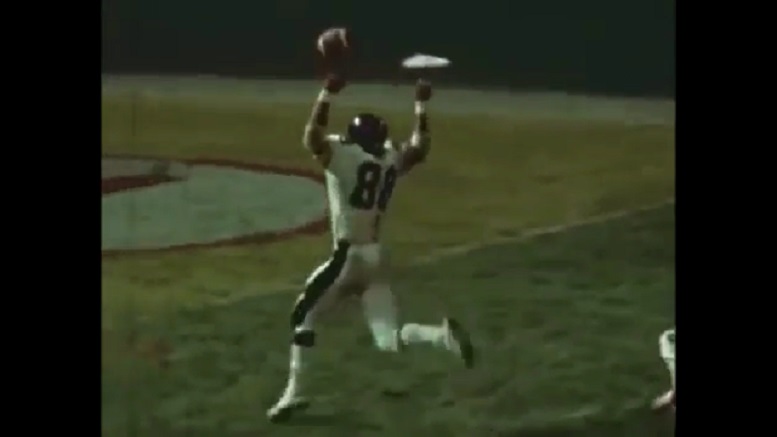 This series now continues with the Steelers longest offensive play of the 1971 season, which came against the Kansas City Chiefs at Municipal Stadium in Kansas City on October 18, 1971 and on Monday Night Football. Once again, it was Steelers quarterback Terry Bradshaw connecting with wide receiver Dave Smith on a long pass play. This time, however, Smith failed to score even though he should have.

The play, a 49-yard completion from Bradshaw to Smith, came sometime in the fourth quarter and with the Steelers trailing the Chiefs 31-9. The down and distance aren’t known, but Smith did catch the pass from Bradshaw in the middle of the field and at the Chiefs 44-yard-line.

Smith then proceeded to outrun all remaining Chiefs defenders on a soggy field. However, just before crossing the goal-line for a touchdown, Smith inexplicably tossed the football up in the air in celebration as he thought he was already in the end zone. He then proceeded to slip in the end zone and the football bounced past the back-line for a touchback.

“I didn’t know I wasn’t in the end zone,” said Smith about his blunder after the game. “I thought I was there and just dropped the ball. I didn’t know anything was wrong until I came back to the bench and television cameramen were dodging through people to take my picture. The way they were coming at me, I knew something unusual had happened.”

Bradshaw, who threw for a then-career high 269 yards in that 38-16 Monday night loss to the Chiefs, defended Smith’s faux pas after the game was over.

“You can’t get mad about something like that,” said Bradshaw. “Dave feels worse about it than anyone. Maybe something good will come of this.”

Smith’s 93 receiving yards on five receptions in that loss to the Chiefs was tops in that contest for the visiting Steelers. Unfortunately for Smith, however, that blunder of his on that one play against the Chiefs ultimately became the play he was most known for in his four seasons in the NFL.