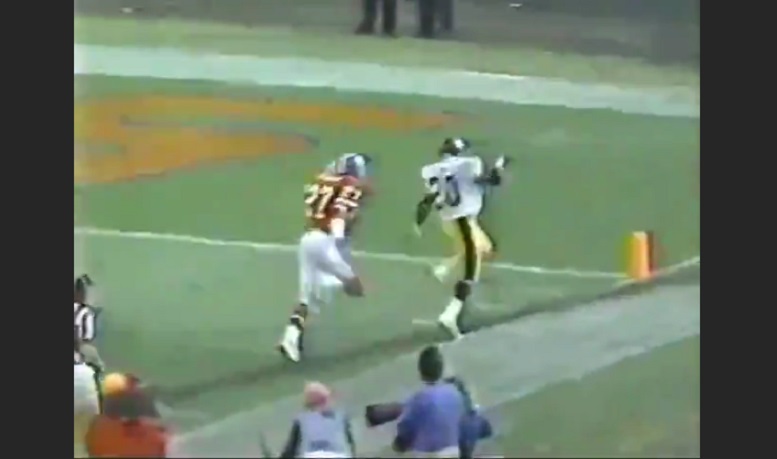 This series now continues with the Steelers longest offensive play of the 1990 regular season, which came in Week 6 of the season against the Denver Broncos and at Mile High Stadium in Denver, CO on October 14. The play, a 90-yard pass completion from quarterback Bubby Brister to wide receiver Dwight Stone, came on a first-and-10 play with 6:16 left in the third quarter and with the Steelers leading the Broncos 21-17.

On the play, Stone, who was lined up wide on the right side pre snap, ran a deep go route and was able to beat and stack Broncos cornerback Elliot Smith. After a nice play-action fake, Brister then delivered a great deep pass from two-yards deep in the Steelers end zone to Stone, who caught it over his head at the Broncos 40-yard-line. That pas traveled 62 yards in the air.

I wasn’t trying to run out of bounds, Stone said after the game, according to the Pittsburgh Press. “When they said I stepped out of bounds, I was shocked. I thought I had a touchdown. I didn’t think I was close to the sideline.”

Steelers head coach Chuck Noll also commented on Stone’s inability to score on that deep pass completion after the game had ended.

“If we keep Stoney from running out of bounds, it may help us,” Noll said.

Stone not scoring on that deep pass play wound up hurting the Steelers as running back Warren Williams fumbled away the football to the Broncos into the end zone on third-and-goal play from the Denver 1-yard-line.

At the time, the 90-yard completion from Brister to Stone tied the Steelers’ longest pass play in team history.

Stone only caught that one pass in what was ultimately a Steelers 35-17 road win over the Broncos. As for Brister’s performance against the Broncos, it was the best of his career as not only did he compete 21 of his 28 total pass attempts for 353 yards, he also threw four touchdowns and no interceptions.

Below is a video of Brister’s pass to Stone against the Broncos.