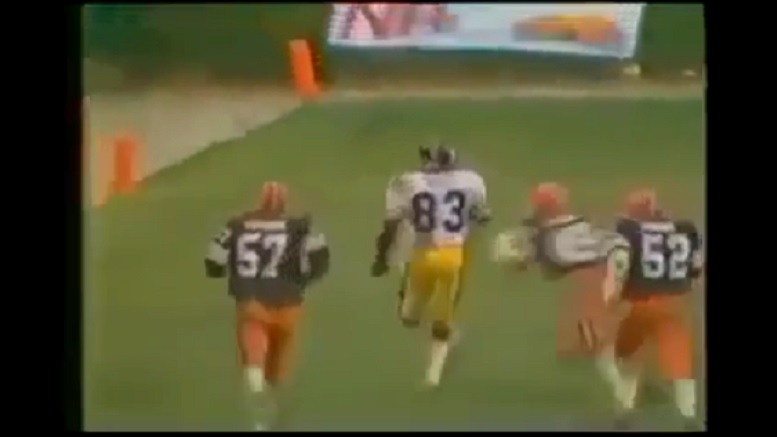 This series now continues with the Steelers longest offensive play of the 1980 regular season, which came in Week 8 against the Cleveland Browns and at Municipal Stadium in Cleveland on October 26. The play, a 78-yard pass completion from Steelers quarterback Cliff Stoudt to wide receiver Theo Bell, came on a third-and-9 play with around three minutes remaining in the third quarter and with the Steelers leading the Browns 20-14.

Stoudt, who was making his first career start in that game against the Browns in place of an injured Terry Bradshaw, was 11-of-24 passing for 152 yards ahead of him connecting with Bell in the middle of the field and just short of the 50-yard-line. After catching the pass from Stoudt, Bell broke free and ran to the left side of the field but was ultimately tackled by Browns cornerback Ron Bolton at the Cleveland 2-yard-line.

The Steelers cashed in on the big play by Bell on the next snap as running back Sydney Thornton scored on a 2-yard run. Steelers kicker Matt Bahr unfortunately missed the extra-point; however, and thus the score was 26-14 with little time left in the third quarter.

Stoudt finished the game 18-of-37 passing for 310 yards and one interception. It was the only 300-yard passing game of his career. As for Bell, who started that game against the Browns due to fellow wide receivers Lynn Swann and John Stallworth both sitting out the contest due to injuries, he finished with four receptions for 125 yards.

Not only did Bradshaw, Swann and Stallworth all miss that game against the Browns due to injuries, linebacker Jack Lambert did as well. According to a Pittsburgh Press story the day after the Steelers loss to the Browns, 35 players on the Pittsburgh 45-man roster were under some sort of medical treatment ahead of that road game in Cleveland.

That loss to the Browns dropped the Steelers to 4-4 on the season. They ultimately finished the 1980 season with a 9-7 record and in third place in the AFC Central division.

Below is a video of Stoudt’s pass to Bell against the Browns in addition to a video of the full game.