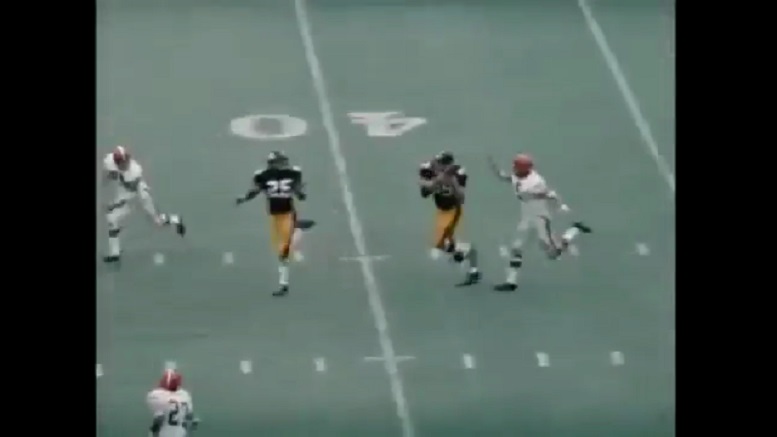 This series now continues with the Steelers longest offensive play of the 1972 season, which came in Week 12 against the Cleveland Browns at Three Rivers Stadium in Pittsburgh on December 3. The play, a 78-yard touchdown pass from quarterback Terry Bradshaw to tight end John McMakin, came in the fourth quarter and it put the Steelers ahead 24-0.

That pass from Bradshaw, however, was intended to go to wide receiver Ron Shanklin and not McMakin and the tight end pretty much confirmed as much after the game was over.

“I don’t think I was in the wrong place, but the coach might,” McMakin said, according to an Associated Press report. “But I wasn’t about to pass that one up.”

On the play, McMakin beat Browns middle linebacker Dale Lindsey, who was covering him, and caught the football at the Steelers own 38-yard-line and in the middle of the field. He then outran all Browns defenders 62 yards for his first career touchdown.

McMakin ended the game with three receptions for 113 yards and the long score. As for Bradshaw, he finished the 30-0 win over the Browns having completed nine of his 17 total pass attempts for 162 yards with the lone touchdown toss to McMakin.

As for Shanklin, he finished the game having registered two receptions for 23 yards. Other than running back Franco Harris, who caught four passes for 26 yards against the Browns, McMakin and Shanklin were the only other players to catch passes from Bradshaw in that contest.

Interesting enough, that game was the first Pittsburgh shutout since 1963 when the Steelers blanked the New York Giants 31-0.