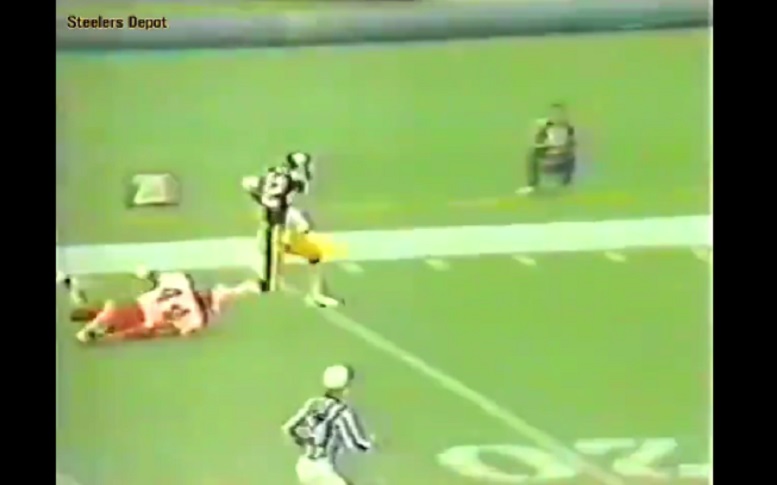 This series now continues with the Steelers longest offensive play of the 1982 regular season, which came in Week 13 of the strike-shortened season against the Kansas City Chiefs and at Three Rivers Stadium in Pittsburgh on December 5. The play, a 74-yard pass completion for a touchdown from Steelers quarterback Terry Bradshaw to wide receiver John Stallworth, came on a third-and-4 play with a little more than four minutes remaining in the first quarter and with the Steelers leading the Chiefs 7-0.

On the play, Stallworth beat Chiefs cornerback Eric Harris down the left sideline and Bradshaw hit his veteran wide receiver in stride. After the game, however, Bradshaw admitted that wide receiver Jim Smith was supposed to be the primary target on that touchdown play and that Stallworth was supposed to run a post route, according to the Pittsburgh Post-Gazette. When Harris stayed inside Stallworth off the snap, the wide receiver stayed outside the Chiefs cornerback and Bradshaw found him after seeing that Smith was covered.

That completion to Stallworth became the longest regular season reception of his career at the time and it was Bradshaw’s fifth-longest. Bradshaw also passed 27,000 passing yards for his career on that pass to Stallworth, who caught four passes in total against the Chiefs for 107 yards and two touchdowns. It was the fifteenth time in his career that Stallworth registered 100 yards or more receiving in a game. He also only played the first half of that game against the Chiefs due to an abdominal strain.

As for Bradshaw, who completed 15 of his 20 total pass attempts for 231 yards and three touchdowns with one interception, he was relieved late in that game by backup quarterback Cliff Stoudt. The Steelers ultimately beat the Chiefs 35-14 to move to 4-1 on the season.

Below is a video of Bradshaw’s long touchdown pass to Stallworth against the Chiefs.