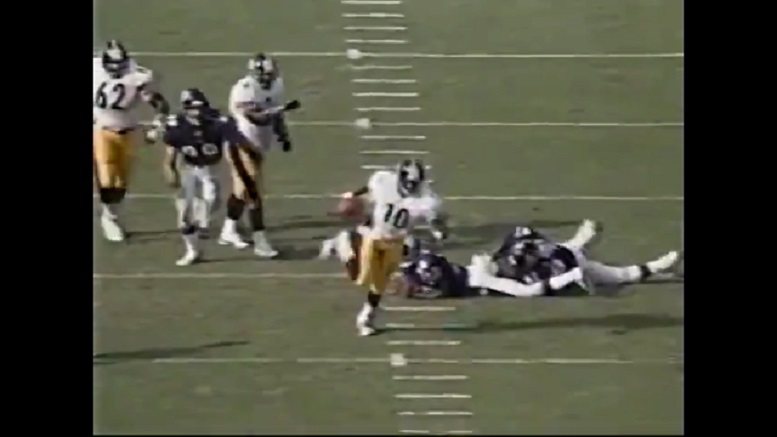 This series now continues with the Steelers longest offensive play of the 1997 regular season, which came in Week 6 of the season against the Baltimore Ravens and at Memorial Stadium in Baltimore, MD on October 5. The play, a 74-yard run for a touchdown by quarterback Kordell Stewart, came on a third-and-4 play with 2:00 left in the fourth quarter and with the Steelers leading the Ravens 35-32.

On the play, Stewart faked a handoff to running back Jerome Bettis and then another one to reversing wide receiver Yancey Thigpen. Stewart then cut up the field to the left side and immediately broke a tackle attempt by Ravens cornerback Eugene Daniel at the Steelers 25-yard-line. From there, all Stewart had to do was to outrun Ravens safety Stevon Moore to the end zone, which he did despite developing a gimp at around the Baltimore 10-yard-line. Stewart then collapsed backwards onto the ground in the end zone after scoring.

Bettis said after the game he thought he was getting the football from Stewart on that particular play.

“Kordell is a special player,” said Bettis, who totaled 137 yards on 28 carries against the Ravens, according to the Baltimore Sun. “When he’s in the game, anything can happen, but I didn’t expect that. When he didn’t hand it to me, I looked over at Yancey for the reverse, and when he didn’t have it, I looked upfield and there went Kordell. That was a great play and gutsy call. I’m just glad I wasn’t on the line trying to figure out where I was supposed to go to block.”

Stewart also talked about his long touchdown run against the Ravens after the game.

“The only person back there was [cornerback Eugene] Daniel, and I just gave him the shake and bake,” Stewart said, according to the Pittsburgh Post-Gazette. “[Once I got past him] I had to go all the way because you can’t be caught from behind. I started thinking about all the fines I might have to pay if I got caught. I kind of sucked it up and put it in extra gear.”

While the Steelers ultimately beat the Ravens 42-34 in that 1997 road game, Stewart’s overall play in that contest included quite a few ups and downs. In addition to registering 78 yards and two touchdowns on six runs against the Ravens, Stewart also completed 18 of his 28 total pass attempts for 246 yards with three touchdowns and three interceptions.

Below is a video of Stewart’s 74-yard touchdown run against the Ravens.