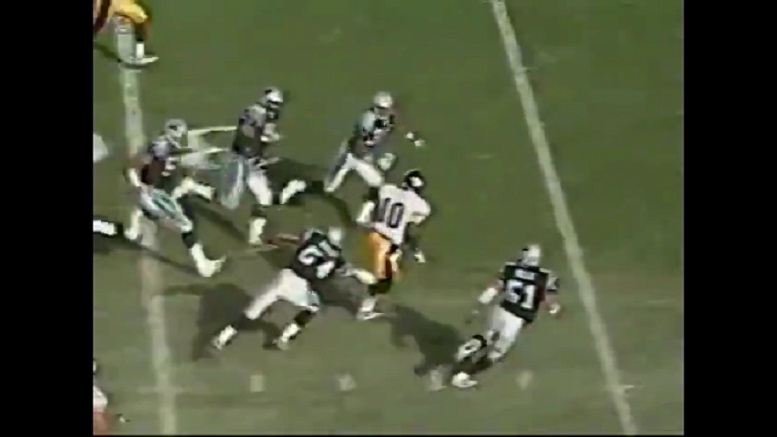 This series now continues with the Steelers longest offensive play of the 1996 regular season, which came in Week 17 of the season against the Carolina Panthers and at Ericsson Stadium in Charlotte, NC on December 22. The play, an 80-yard run for a touchdown quarterback Kordell Stewart, came on a first-and-10 play with 7:22 left in the second quarter and with the Steelers trailing the Panthers 9-7.

On the play, Stewart, who had rolled out to his right after a play-action fake to running back Fred McAfee, decided to take off up the middle after not finding any targets open to pass to. Stewart first easily ran right through a group of five Panthers defensive players in the middle of the field at the Steelers 35-yard-line. He then also easily outran chasing Panthers safety Pat Terrell much further down the field on his way to the end zone for a touchdown.

“I took off and let my speed takeover,” Stewart said about his long touchdown scamper after the game, according to the Pittsburgh Post-Gazette “I just didn’t see anything open. I just wanted to do something there and I did.”

Stewart did not start the regular season finale as Steelers head coach Bill Cowher wanted to get fellow quarterback Mike Tomczak a little playing time ahead of the playoffs. That Stewart run came on the first play of his second offensive possession as the Steelers quarterback. His first possession lasted all of two plays as his first pass attempt of the game was intercepted.

Stewart, who rushed for 102 yards and that touchdown on seven runs against the Panthers in the 18-14 road loss, also completed 8 of his 21 total pass attempts in that contest for 77 yards with no touchdowns and two interceptions.

The 80-yard touchdown run by Stewart was also the Steelers longest run from scrimmage since John Fuqua went 85 yards against the Philadelphia Eagles on December 20, 1970.

Below is a video of Stewart’s 80-yard touchdown run against the Panthers in addition to another video that provides a long recap of that 1996 contest.