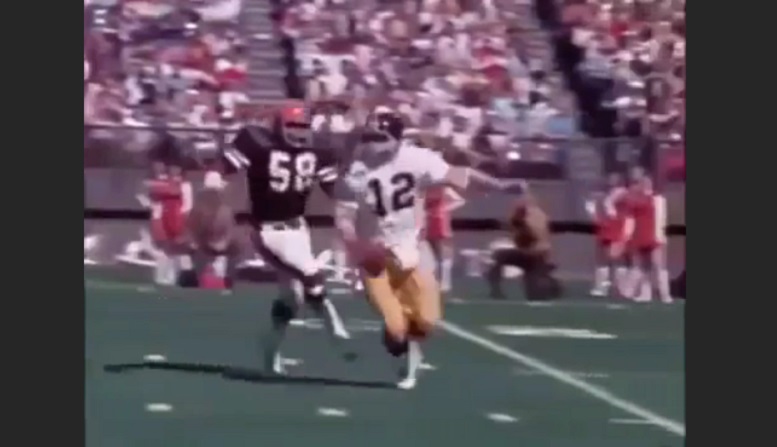 This series now continues with the Steelers longest offensive play of the 1973 season, which came in Week 5 against the Cincinnati Bengals at Riverfront Stadium in Cincinnati on October 14. The play, a 67-yard completion from quarterback Terry Bradshaw to wide receiver Ron Shanklin, came roughly midway through the fourth quarter.

While there is no video of the Bradshaw pass to Shanklin to show, we have a rather good idea of how it happened thanks to several different accounts in newspaper reports. According to a few of those reports, the Bradshaw pass to Shanklin went off the hands of Bengals cornerback Bernard Jackson and the Steelers wide receiver ultimately caught it after the football wobbled in the air. The “freak play”, as it was described in one newspaper report, apparently included Shanklin being caught from behind at the Cincinnati 5-yard-line by Bengals safety Tommy Casanova. 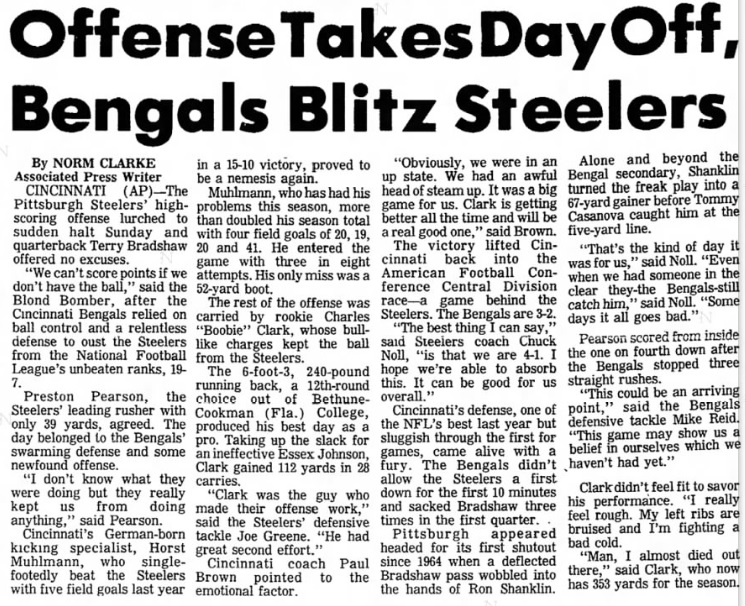 “That’s the kind of day it was for us,” said Steelers head coach Chuck Noll after the game on Shanklin getting caught from behind by Casanova. “Even when we had someone in the clear, they still catch him. Some days it all goes bad.”

It was indeed a bad day for the Steelers in that Week 5 loss to the Bengals as Bradshaw, who was sacked four times by the Cincinnati defense during the game, completed just nine passes for 106 yards and an interception. Shanklin’s 67-yard reception in the fourth quarter was his only catch of the game.

Shanklin’s catch and run did help prevent the Steelers from being shutout for the first time since 1964, however, as running back Preston Pearson scored from 1-yard out on a fourth and goal running play after the offense had attempted three previous running plays that had managed to gain all of four yards. Video of that touchdown run by Pearson is below.

The Steelers lost that game to the Bengals 19-7 and it was their first defeat of the season.