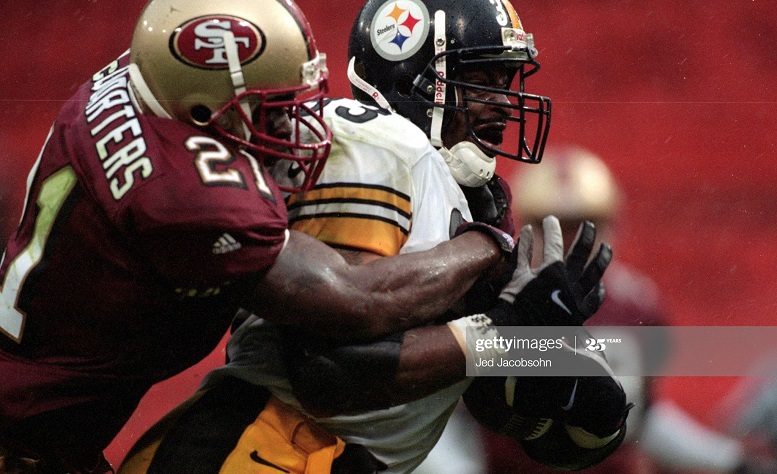 This series now continues with the Steelers longest offensive play of the 1999 regular season, which came in Week 9 of the season against the San Francisco 49ers and at 3Com Park in San Francisco, CA on November 7. The play, a 52-yard run by running back Richard Huntley, came on a third-and-2 play with roughly 14:00 left in the fourth quarter and with the Steelers leading the 49ers 20-6.

On the play, Huntley ran around left end and was ultimately tackled at the 49ers 1-yard-line by San Francisco cornerback R.W. McQuarters. That touchdown-saving tackle by McQuarters turned out to be huge on that drive as the Steelers offense ultimately stalled at the 49ers 12-yard-line thanks to a couple of penalties, a run for a loss by running back Jerome Bettis and a few incomplete passes. Steelers kicker Kris Brown missed the 31-yard field goal attempt by hitting the right upright and the offense came away empty-handed despite the long run by Huntley.

Huntley finished the game with 83 yards rushing on seven total carries and the Steelers ultimately went on to beat the 49ers 27-6. That 52-yard run would go on to stand as Huntley’s longest gain from scrimmage of his NFL career.

While the Steelers beat the 49ers that Sunday to move to 5-3 on the season, they then proceeded to lose their next six games and won just once in their last eight.

The Steelers longest pass play during the 1999 regular season was just 49 yards.

While I do not have a video of Huntley’s long run against the 49ers to show, I do have a short video highlight recap of that win to pass along and it is below.