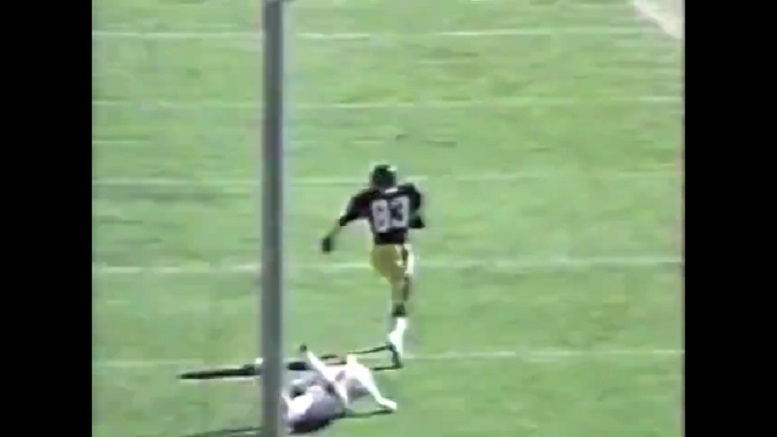 This series now continues with the Steelers longest offensive play of the 1989 regular season, which came in Week 16 of the season against the Tampa Bay Buccaneers and at Tampa Stadium in Tampa, FL on December 24. The play, a 79-yard pass completion for a touchdown from quarterback Bubby Brister to wide receiver Louis Lipps, came on a first-and-10 play early in the second quarter and with the game tied at 7-7.

On the play, Lipps, who was lined up on the right outside, ran a slant to the inside and managed to get over the top of Buccaneers cornerback Bobby Futrell, who had his eyes on Brister right from the snap of the football. Lipps managed to outmaneuver Futrell for positioning and he leaped and made the catch before the Buccaneers cornerback could break it up.

After making the catch at the Steelers 35-yard-line, Lipps then avoided a tackle attempt by Buccaneers safety Harry Hamilton at the 43-yard-line and then easily ran the remaining 57 yards for the touchdown.

Lipps added another touchdown reception later in the second quarter and ended the final regular season game of 1989 with four receptions for 137 yards and two scores. As for Brister in the Steelers 31-22 road win over the Buccaneers, he finished the contest 7-of-15 passing for 178 yards with two touchdowns and two interceptions.

Below is a video of Brister’s touchdown pass to Lipps against the Buccaneers.