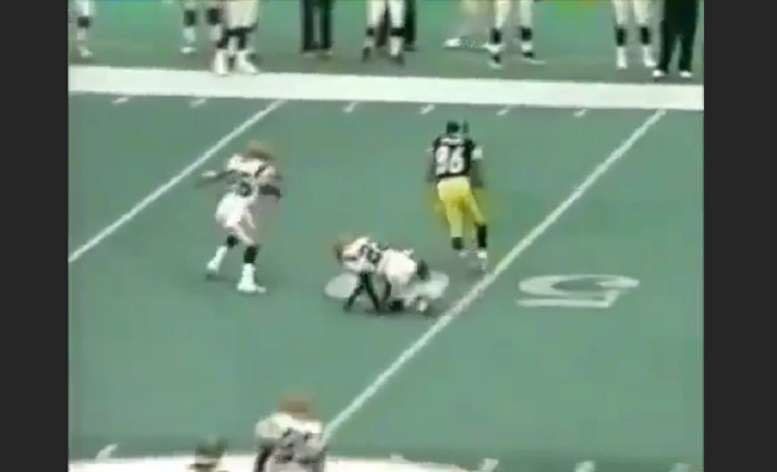 This series now continues with the Steelers longest offensive play of the 2000 regular season, which came in Week 7 of the season against the Cincinnati Bengals and at Three Rivers Stadium in Pittsburgh on October 15. The play, a 77-yard pass completion from quarterback Kent Graham to wide receiver Hines Ward for a touchdown, came on a second-and-8 play with 14:06 left in the first quarter and with the Steelers tied with the Bengals 0-0. It was just the second offensive play of the game.

On the play, Ward, who was lined up originally on the right side of the formation and in the slot, ran a vertical route up the field and just outside the numbers with Bengals cornerback Rodney Heath in coverage. Graham’s pass to Ward found its mark at the Steelers 45-yard-line and just before safety Cory Hall could arrive. Hall still managed to apply a hit on Ward to attempt to dislodge the football but to no avail. Hall’s hit attempt on Ward not only knocked a trailing Heath off his feet but resulted in the safety losing his footing momentarily as well.

After breaking free of the tackle attempts by Hall and Heath, Ward was spring loose down the right sideline thanks to a great block on the edge and at the Bengals 35-yard-line by fellow Steelers wide receiver Plaxico Burress. Ward then ran the final 35 yards to the end zone for the touchdown uncontested.

After the game, Graham said that the touchdown pass to Ward early in the contest came after he audibled away from a run play at the line of scrimmage after seeing the Bengals defensive alignment, which was aimed at stopping the run.

“Last week when they played Tennessee, they did a lot of man-to-man stuff and blitzing,” Graham said of the Bengals, according to the Pittsburgh Post-Gazette. “I was prepared to check off.”

Ward also talked about the play and specifically, what happened right after he made the catch.

“I got squished in there,” Ward said after the game.

The 77-yard pass in the first quarter was a Steelers longest since Mike Tomczak and Charles Johnson hooked up for 84 yards on December 24, 1994 against the San Diego Chargers.

Ward ended the game with just two receptions for 91 yards and the long touchdown. As for Graham, he completed just 13 of his 33 total pass attempts for 173 yards and that one touchdown to Ward in that 15-0 home win against the Bengals.

Below is a video of Graham’s touchdown pass to Ward against the Bengals in addition to a short video that recaps the game.