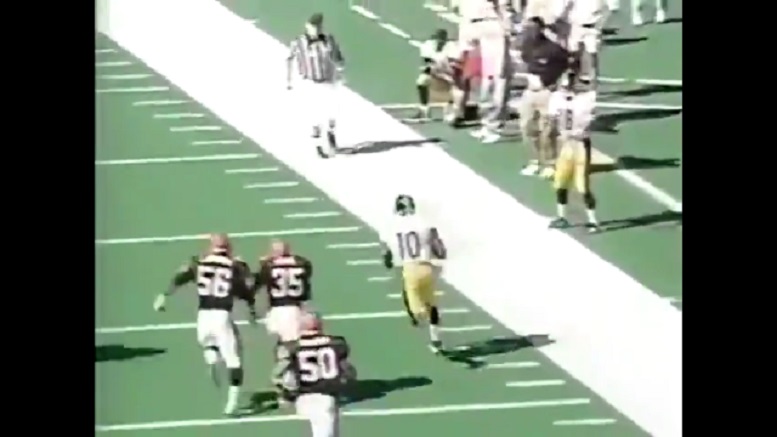 This series now continues with the Steelers longest offensive play of the 1998 regular season, which came in Week 6 of the season against the Cincinnati Bengals and at Cinergy Field in Cincinnati, OH on October 11. The play, a 56-yard run by quarterback Kordell Stewart, came on a second-and-10 play with 8:57 left in the second quarter and with the Steelers leading the Bengals 3-0.

On the play, Stewart dropped back to pass but with the pocket quickly collapsing around him, he took off up the middle of the field and then cut to the right sideline to avoid Bengals linebackers Takeo Spikes and Brian Simmons. Stewart initially looked like he might score on the play. However, Bengals cornerback Artrell Hawkins had a better angle and ultimately knocked Stewart out of bounds at the Bengals 13-yard-line.

The Steelers called a timeout after that long dash by Stewart and on the next play running back Jerome Bettis ran 13 yards to the right side for a touchdown that stretched the lead over the Bengals to 10-0.

Stewart ran seven times for 103 yards in that game against the Bengals and in the process became the first quarterback in the NFL to top 100 yards since December 22, 1996, when he ran for 102 yards against the Carolina Panthers. Stewart also completed 13 of his 22 total pass attempts for 151 yards with no touchdowns and no interceptions in what ultimately was a 25-20 road loss to the Bengals.

The Steelers offense registered just three explosive plays of 20 yards or longer in that loss to the Bengals with Stewart being responsible for two of those by using his legs to run. The Bengals quarterback in that win over the Steelers was none other than Neil O’Donnell and he completed 20 of his 26 total pass attempts against his former team for 298 yards and three touchdowns.

The Steelers longest pass play during the 1998 regular season was just 55 yards.

Below is a video of Stewart’s 56-yard run against the Bengals.