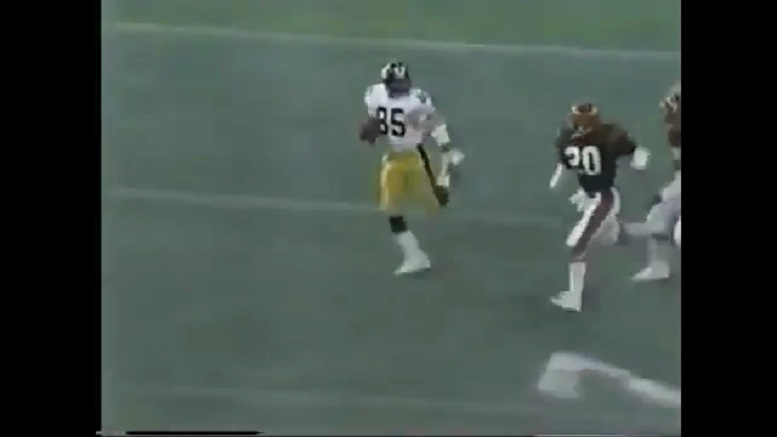 This series now continues with the Steelers longest offensive play of the 1986 regular season, which came in Week 6 of the season against the Cincinnati Bengals and at Riverfront Stadium in Cincinnati, OH on October 13. The play, a 58-yard pass completion from quarterback Bubby Brister to wide receiver Calvin Sweeney, came on a third-and-9 play in the first quarter and with the Steelers trailing the Bengals 7-0 on Monday Night Football.

On the play, Sweeney, who was lined up in the slot to the right side, got open in the middle of the field and just shy of the 50-yard-line. Brister found Sweeney and delivered the pass to him after first stepping up into the pocket. After making the catch, Sweeney broke loose from three Bengals defensive players in the middle of the field and eventually was run out of bounds on the right sideline by defensive back Ray Horton, who would later become the Steelers secondary coach after his NFL career was over.

Sweeney finished that Monday night loss to the Bengals with three receptions for 89 yards. As for Brister, who made his first career NFL start as a rookie in that Monday night game, he finished the contest having completed just 12 of his 33 total attempts for 191 yards with no touchdowns and no interceptions. Brister did have a 1-yard rushing touchdown in that loss, however.

Below is a video of Brister’s pass to Sweeney against the Bengals in addition to a full replay of the 1986 Monday night game.