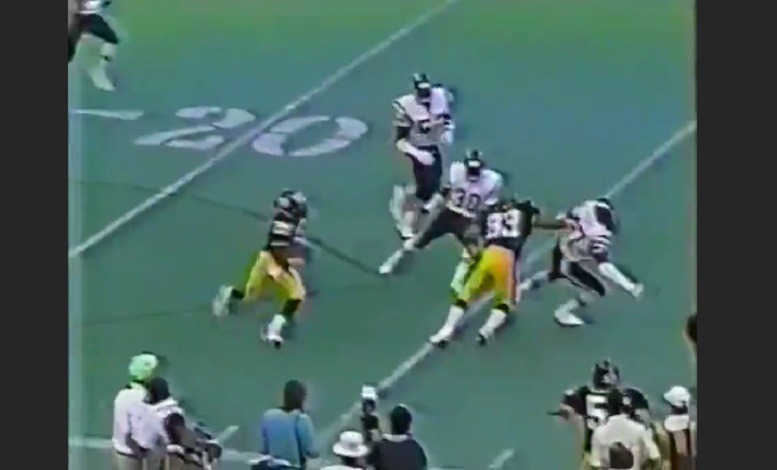 This series now continues with the Steelers longest offensive play of the 1991 regular season, which came in Week 1 of the season against the San Diego Chargers and at Three Rivers Stadium in Pittsburgh on September 1. The play, an 89-yard pass completion from quarterback Neil O’Donnell to wide receiver Dwight Stone for a touchdown, came on a third-and-19 play with 1:44 left in the fourth quarter and with the Steelers leading the Chargers 19-13.

Once Stone had the football in the open field, a great block by fellow Steelers wide receiver Louis Lipps on essentially three Chargers defensive players just short of the Steelers 30-yard-line, provided a clear path to the end zone for the Pittsburgh speedster.

“That’s something you got to do if you want to play receiver here,” Lipps said after the game, according to the Pittsburgh Post-Gazette. “You got to block. It doesn’t make up for the drops, but you got to forget about those and come back.”

As for the Stone touchdown coming against a Chargers blitz late in the game, Steelers head coach Chuck Noll commented on that after the game.

“You live by the blitz and you can die by it, and that’s what happened,” Noll said.

That big touchdown play late in that game put it away for good for the Steelers as they went on to win 26-20.

Stone led all Steelers players in receptions and receiving yardage in that game against the Chargers as he finished with four catches for 124 yards and the touchdown. That would ultimately go down as the most receiving yards he ever had in a game during his NFL career.

As for O’Donnell, who was a second-year player in 1991, he finished the game against the Chargers having completed just that one pass to Stone for 89 yards and a touchdown on four total attempts. He entered the game late against the Chargers and replaced an injured starter Bubby Brister, who had to leave the contest in the fourth quarter with a concussion.

Below is a video of O’Donnell’s touchdown pass to Stone against the Chargers.