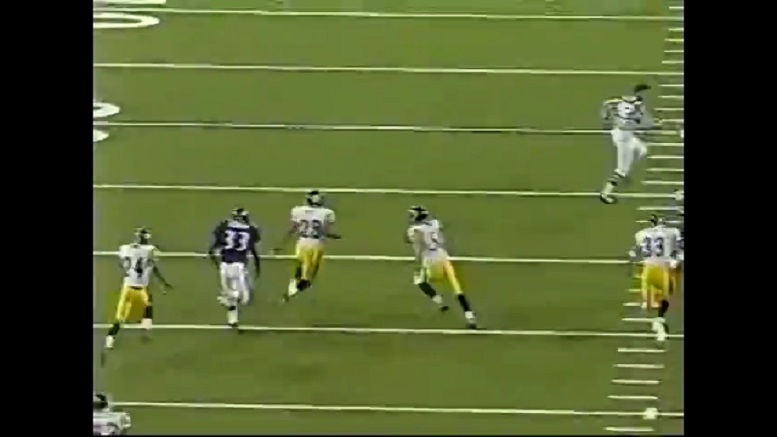 This series now continues with the Steelers longest offensive play of the 2003 regular season, which came in Week 17 of the season against the Baltimore Ravens and at M&T Bank Stadium in Baltimore, MD on December 29. The play, an 81-yard pass completion from punter Josh Miller to safety Chris Hope for a touchdown on a fake punt, came on a fourth-and-1 play with 8:04 left in the third quarter and with the Steelers trailing the Ravens 7-0.

On the play, Hope was the left side wing and the play was set up for him to let Ravens safety ed reed through if he lined up on his side and then settle in the flat for a pass from Miller. Miller only had to throw the football to Hope at the Steelers 12-yard-line, which was 7 yards behind the line of scrimmage. From there, Hope started down the left side of the field with fellow safety Troy Polamalu, who was the personal protector on the play, out in front.

After being forced back to the middle of the field, Hope received a key block from inside linebacker Larry Foote at the Ravens 35-yard-line. He also got some help from safety Russell Stuvaints, linebacker Clint Kriewaldt and cornerback Ike Taylor on his way to scoring the touchdown on the far-right side of the field.

Miller talked about the fake punt for a touchdown after the game.

“I guess it was that obvious that we could get away with it, and it worked out very well,” Miller said, according to the Pittsburgh Post-Gazette.

Ravens head coach Brian Billick also commented on the play after the game.

“I give Bill Cowher a hell of a lot of credit,” Billick said. “That’s a hell of a time to do the fake punt.”

At the time, it was the ninth-longest touchdown pass in Steelers history, and, by far, the longest thrown by a punter and the longest caught by a safety. It was the only pass attempt of Miller’s NFL career and the only reception of Hope’s.

In the end, the Steelers lost the game to the Ravens 13-10 in overtime.

The Steelers second longest pass play that season was 53 yards

Below is a video of Miller’s touchdown pass to Hope against the Ravens in addition to a short video that recaps the game.