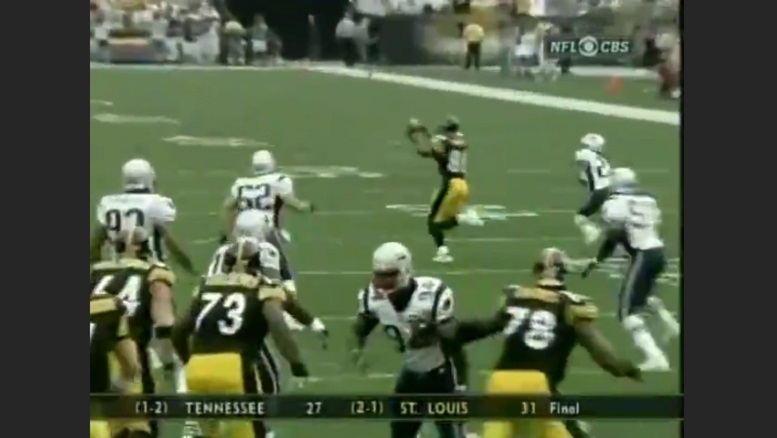 This series now continues with the Steelers longest offensive play of the 2005 regular season, which came in Week 3 of the season against the New England Patriots and at Heinz Field in Pittsburgh on September 25. The play, an 85-yard pass completion from quarterback Ben Roethlisberger to wide receiver Hines Ward for a touchdown, came on a first-and-10 play with 9:43 left in the first quarter and with the Steelers trailing the Patriots 7-0.

On the play, Ward, who was lined up outside to the right by himself, ran a post route up the seam against what looked to be a cover-3 zone defense. After a quick glance to the left side of the field following the snap of the football, Roethlisberger looked right and quickly unloaded a pass to Ward at the Steelers 33-yard-line as the wide receiver had split two Patriots defensive backs, cornerback Asante Samuel and safety Eugene Wilson.  After making the catch, Ward easily ran the remainder of the field for a Steelers touchdown.

Below is a video of Roethlisberger’s touchdown pass to Ward against the Patriots in addition to a short video that recaps the game.