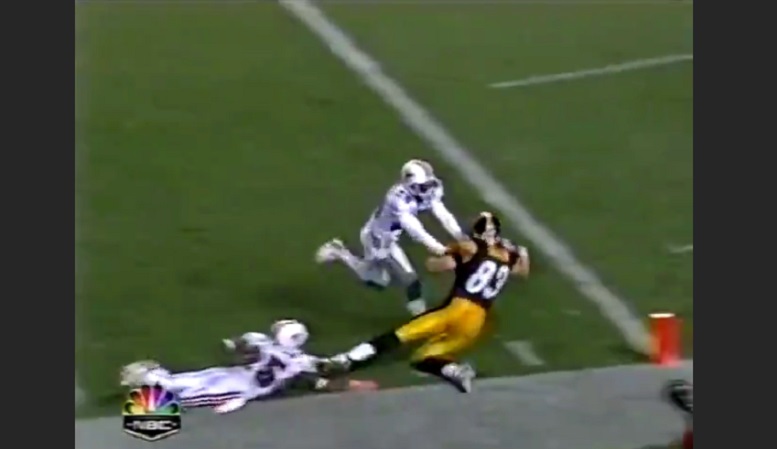 This series now continues with the Steelers longest offensive play of the 2006 regular season, which came in Week 1 of the season against the Miami Dolphins and at Heinz Field in Pittsburgh on September 7. The play, an 87-yard pass completion from quarterback Charlie Batch to tight end Heath Miller for a touchdown, came on a first-and-10 play with 6:25 left in the fourth quarter and with the Steelers trailing the Dolphins 17-14.

On the play, Miller, who started the play attached to the right side of the line of scrimmage, ran a corner route at the snap of the football with Dolphins middle linebacker Zach Thomas in coverage on him. Miller easily ran away from Thomas on the route and Batch quickly got the football to the wide-open tight end as there was no help deep from a Dolphins cornerback or safety.

After catching the football at the Steelers 30-yard-line, Miller started his long trek for the end zone. Dolphins cornerback Will Allen ultimately tackled Miller down and while it looked like the Steelers tight end should have been ruled down at the Miami 1-yard-line, the official nearest the end of the play signaled a touchdown had been scored. After some deliberation, Dolphins head coach Nick Saban seemingly threw the red challenge flag on to the field before the Steelers kicked the extra-point. However, no official saw the challenge flag before the extra-point attempt and thus Saban and the Dolphins were denied the ability to challenge Miller scoring.

“It seemed like a long time to get there,” said Miller about the big play after the game, according to the Pittsburgh Post-Gazette. “That might have been as far as I could run.”

Steelers offensive coordinator Ken Whisenhunt also talked about the play after the game was over.

“Charlie felt comfortable with that play,” Whisenhunt said. “He thought they would double on Hines and he [Miller] just popped out there. But the monkey jumped on his back about the 20.”

The Steelers went on to win that home game 28-17 and Miller finished the contest with three receptions for 101 yards and the long touchdown. As for Batch, who started the game in place off quarterback Ben Roethlisberger due to him recently undergoing an appendectomy, he completed 15 of his 25 total pass attempts for 209 yards and three touchdowns against the Dolphins.

Below is a video of Batch’s touchdown pass to Miller against the Dolphins in addition to a short video that recaps the game.