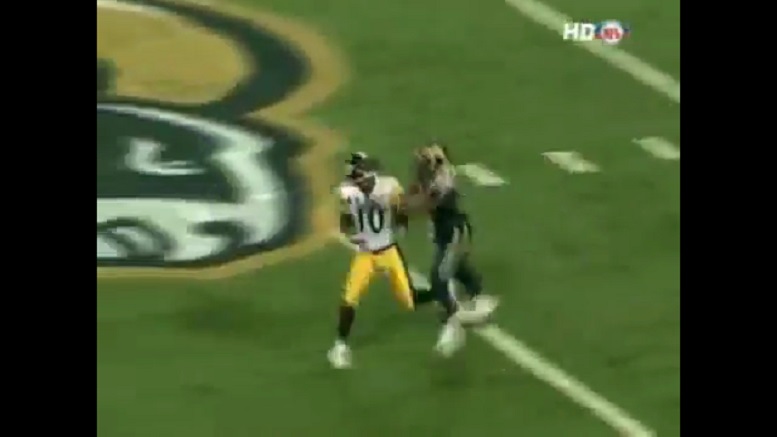 This series now continues with the Steelers longest offensive play of the 2007 regular season, which came in Week 16 of the season against the St. Louis Rams and at the Edward Jones Dome in St. Louis, MO on December 20. The play, an 83-yard pass completion from quarterback Ben Roethlisberger to wide receiver Santonio Holmes, came on a first-and-10 play with 13:19 left in the first quarter and with the Steelers tied with the Rams 0-0. It was the Steelers first offensive play of the game.

On the play, Holmes, who started the play lined up wide to the right side, ran a deep over route as part of what looked like a Yankee concept. At the snap of the football, Rams linebacker Brandon Chillar blitzed Roethlisberger and running back Willie Parker did a great job of upending the defensive player to give the Steelers quarterback time for Holmes’ route to develop. From roughly 5-yards deep in the Steelers end zone, Roethlisberger unleashed a deep pass to Holmes to the left of the middle of the field.

The football found its mark at around the Steelers 49-yard-line despite Rams cornerback Ron Bartell having tight coverage and seemingly contacting Holmes too early. after making the catch, Holmes ran to his right and away from Bartell, who ultimately was able to tackle the Steelers wide receiver near the sideline and at the Rams 13-yard-line. At the time it was the 11th-longest pass play in Steelers history and the second-longest that wasn’t a touchdown.

While the Steelers offense then proceeded to lose yardage on each of the next two plays, the drive fortunately ended in a touchdown thanks to a 17-yard pass from Roethlisberger to wide receiver Nate Washington.

The Steelers ultimately won that road game against the Rams 41-24 and Holmes ended the contest with four receptions for 133 yards. As for Roethlisberger’s showing in that road win against the Rams, it was essentially perfect as he completed 16 of his 20 total pass attempts for 261 yards with three touchdowns and no interceptions. That equated to a perfect passing rating of 158.3.

Below is a video of Roethlisberger’s deep pass completion to Holmes against the Rams in addition to a short video that recaps the game.