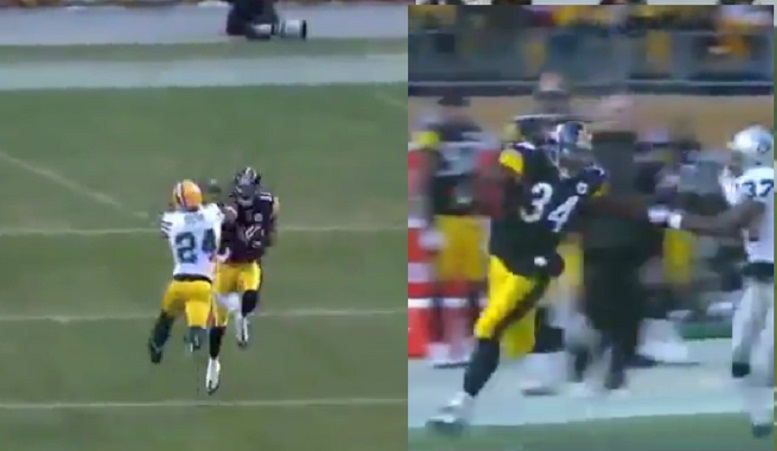 This series now continues with the Steelers longest offensive play of the 2009 regular season and this time there were two matching ones of 60 yards. The first one came in Week 13 of the season against the Oakland Raiders and at Heinz Field in Pittsburgh on December 6 and the second one came in Week 15 against the Green Bay Packers and at Heinz Field and on December 20.

The first of the two plays, a 60-yard run by running back Rashard Mendenhall came on a second-and-4 play with 4:10 left in the first quarter and with the Steelers tied with the Raiders 3-3. On that play, Mendenhall exploded untouched through the hole at right guard after getting the handoff from quarterback Ben Roethlisberger. He then easily broke tackle attempts by two Raiders defensive backs, Michael Huff and Chris Johnson. Johnson, however, was able to ultimately catch back up with Mendenhall further down the field and tackle him at the Raiders 14-yard-line.

That long run by Mendenhall would be for not, however, as four plays later the Steelers offense failed to convert a fourth and 1 at the Raiders 5-yard-line and the football turned over on downs. The Steelers also went on to lose that home game to the Raiders 27-24. Mendenhall ended the contest with 103 yards and a touchdown on 20 carries.

The second of two 60-yard plays for the Steelers offense during the 2009 season, a deep pass down the right side of the field for a touchdown from Roethlisberger to wide receiver Mike Wallace, came on a first-and-10 play with 14:28 left in the first quarter and the game still scoreless. It was the Steelers first offensive play of the game. On the play, Wallace blew past Packers cornerback Jarrett Bush off the snap and Roethlisberger connected with his wide receiver at the Green Bay 10-yard-line following a play-action fake and roll-out to the right. Wallace had Bush beaten so badly and so quickly that he had to wait on the pass from Roethlisberger. After making the catch at the Packers 10-yard-line, Wallace avoided a tackle attempt from Bush and scored.

Below are videos of Mendenhall’s run against the Raiders and Roethlisberger’s pass to Wallace against the Packers.