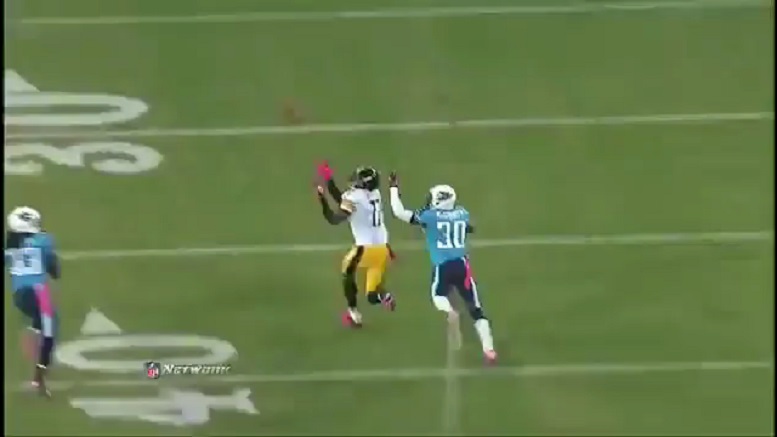 This series now continues with the Steelers longest offensive play of the 2012 regular season, which came in Week 6 of the season against the Tennessee Titans and at LP Field in Nashville, TN on October 11. The play, an 82-yard pass completion from quarterback Ben Roethlisberger to wide receiver Mike Wallace for a touchdown, came on a first-and-10 play with 5:37 left in the first quarter and with the Steelers tired with the Titans 3-3.

On the play, Wallace, who was lined up outside and on the right side of the offensive formation, ran a deep post route against what looked to be a Titans cover-3 defense. Wallace split Titans cornerback Jason McCourty and safety Michael Griffin on the route and Roethlisberger connected with his wide receiver just outside the numbers and at the Titans 36-yard-line. After making the catch, Wallace was able to ward off a tackle attempt by McCourty and then just beat Griffin’s final push along the right sideline to get into the end zone.

That deep pass touchdown to Wallace marked the 24th time that Roethlisberger and the wide receiver had hooked up for a completion of 40 yards or longer. Unfortunately for the Steelers, however, they went on to lose that Thursday night game against the Titans 26-23.

Below is a video of Roethlisberger’s touchdown pass to Wallace against the Titans in addition to a video that recaps the game.