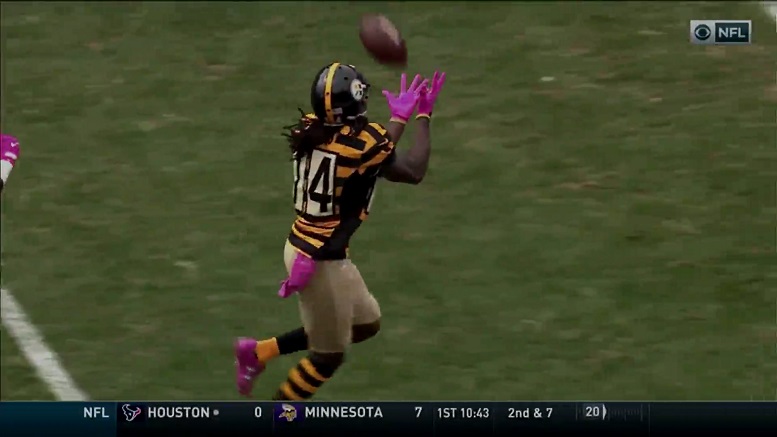 This series now continues with the Steelers longest offensive play of the 2016 regular season, which came in Week 5 of the season against the New York Jets and at Heinz Field in Pittsburgh, PA on October 9. The play, a 72-yard pass completion from quarterback Ben Roethlisberger to wide receiver Sammie Coates for a touchdown, came on a third-and-7 play with 10:25 left in the first quarter and with the Steelers trailing the Jets 3-0.

On the play, Coates, who was initially lined up outside on the right and inside the numbers, ran a go route that stemmed outside of Jets cornerback Marcus Williams. Coates easily ran past Williams and with three yards of separation, caught a beautifully thrown deep pass from Roethlisberger at about the Jets 32-yard-line. After making the catch, Coates easily ran away from a trailing Williams down the right sideline for the touchdown.

The Jets went on to beat the Jets 31-13 and Coates ended the contest having caught six passes for 139 yards and two touchdowns. Those were the only two touchdowns he scored during his NFL career and his 139 yards receiving would go on to stand to be his career best.

As for Roethlisberger, he completed 34 of his 47 total pass attempts against the Jets for 380 yards and four touchdowns with no interceptions.

Below is a video of the Roethlisberger 72-yard-touchdown pass to Coates in addition to a short video that recaps the game.