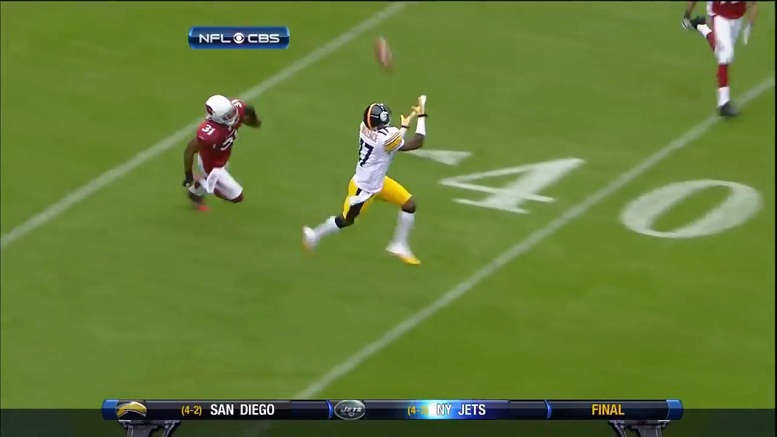 This series now continues with the Steelers longest offensive play of the 2011 regular season, which came in Week 7 of the season against the Arizona Cardinals and at the University of Phoenix Stadium in Glendale, AZ on October 23. The play, a 95-yard pass completion from quarterback Ben Roethlisberger to wide receiver Mike Wallace for a touchdown, came on a first-and-14 play with 8:21 left in the second quarter and with the Steelers leading the Cardinals 7-0.

On the play, Wallace, who motioned from the left side of the offensive formation to the right side before the snap, ran a deep post route inside of Cardinals cornerback Richard Marshall. Wallace easily blew past Marshall and with Cardinals safety Rashad Johnson late providing help, Roethlisberger was able to deliver a deep pass to the Steelers wide receiver. Wallace caught the deep pass from Roethlisberger at the Steelers 41-yard-line and just outside of the numbers and then proceeded to avoid tackle attempts by both Marshall and Johnson after the catch on his way to scoring.

“We got the coverage we wanted,” Wallace said about the big play after the game, according to the Pittsburgh Tribune-Review. “The safety was in the middle of the field, so I just threw up my hand and Ben saw me.”

Roethlisberger also talked about the big play after the game.

“You put it out there for a guy like that, he makes a play, and you kind of start smiling because you know he’s not going to get caught,” Roethlisberger said.

At the time, that 95-yard touchdown pass from Roethlisberger to Wallace became the longest play from scrimmage in the history of the Steelers.

The Steelers went on to beat the Cardinals 32-20 and Wallace ended that contest with three receptions for 118 yards and the long touchdown. As for Roethlisberger, he completed 26 of his 39 total pass attempts against the Cardinals for 361 yards with three touchdowns and no interceptions.

Below is a video of Roethlisberger’s touchdown pass to Wallace against the Cardinals in addition to a short video that recaps the game.