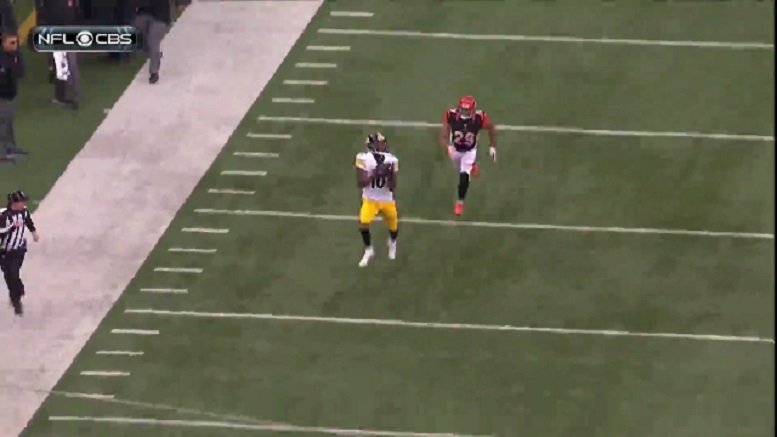 This series now continues with the Steelers longest offensive play of the 2014 regular season, which came in Week 14 of the season against the Cincinnati Bengals and at Paul Brown Stadium in Cincinnati, OH on December 7. The play, a 94-yard pass completion from quarterback Ben Roethlisberger to wide receiver Martavis Bryant for a touchdown, came on a first-and-10 play with 8:43 left in the fourth quarter and with the Steelers leading the Bengals 28-21.

On the play, Roethlisberger, gave a great play-action fake and behind max protection he delivered an on target deep pass down the right sideline to Bryant, who after motioning from the left side to the right side of the formation pre snap, ran right past Bengals cornerback Leon Hall on the outside with the one deep safety well inside and in the middle of the field. Bryant had three-yards of separation on Hall when he caught the pass from Roethlisberger at the Steelers 48-yard-line. After making the catch, Bryant easily outran Hall and Bengals safety George Iloka to the end zone for a touchdown.

Roethlisberger talked about the big touchdown pass after the game.

“They showed a coverage and I didn’t believe them,” Roethlisberger said of the Bengals’ defense, according to ESPN. “We did a little play-action and just let it fly. I’ve underthrown him in practice because when he gets running, he’s fast. I just put it out there, let him run under it, and he did the rest.”

At the time, that long 94-yard touchdown pass from Roethlisberger to Bryant was the second-longest play in the history of the Steelers franchise.

The Steelers went on to beat the Bengals 42-21 and Bryant ended that road contest having caught four passes for 109 yards and the long touchdown. As for Roethlisberger in that road win over the Bengals, he completed 25 of his 39 total pass attempts in that game for 350 yards with three touchdowns and no interceptions.

Below is a video of the Roethlisberger 94-yard-touchdown pass to Bryant in addition to a short video that recaps the game.