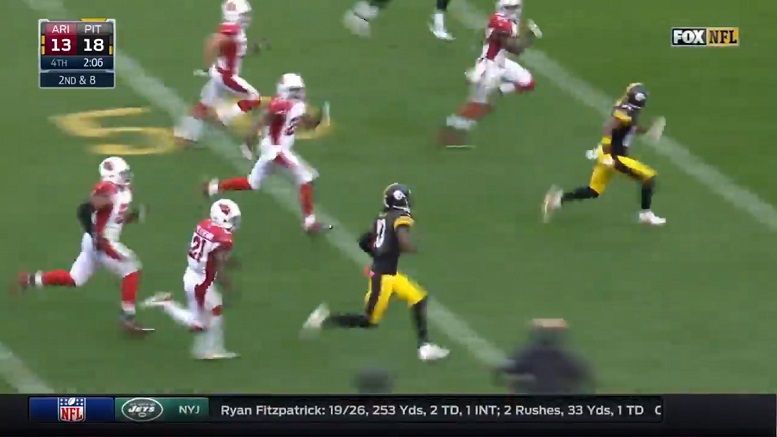 This series now continues with the Steelers longest offensive play of the 2015 regular season, which came in Week 6 of the season against the Arizona Cardinals and at Heinz Field in Pittsburgh, PA on October 18. The play, an 88-yard pass completion from quarterback Landry Jones to wide receiver Martavis Bryant for a touchdown, came on a second-and-8 play with 2:15 left in the fourth quarter and with the Steelers leading the Cardinals 18-13.

On the play, Bryant, who was initially lined up outside on the right side of the formation, ran a slant in front of Cardinals safety Tyrann Mathieu and Jones connected with the wide receiver just inside the numbers and at the Steelers 21-yard-line. After making the catch, Bryant ran to the middle of the field and then made a cut, forcing Mathieu to miss his tackle attempt. Bryant reversed course toward the right side line and even though six Cardinals players were in hot pursuit, the wide receiver still managed to cut back toward the middle of the field at the Arizona 30-yard-line and run the rest of the remaining distance to the end zone for a touchdown.

The Steelers went on to beat the Cardinals 25-13 and Bryant finished that contest with six receptions for 137 yards and two touchdowns. As for Jones, who had replaced starting quarterback Michael Vick early in the third quarter of that game due to injury, he completed eight of his 12 total pass attempts for 168 yards with two touchdowns to Bryant.

Below is a video of the Jones 88-yard-touchdown pass to Bryant in addition to a short video that recaps the game.