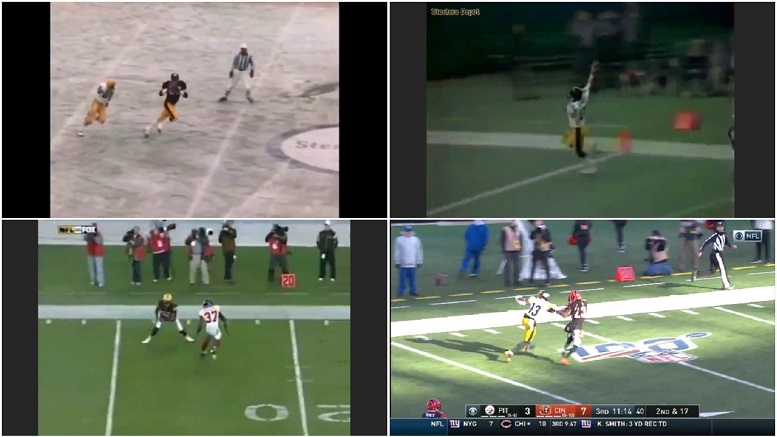 I recently concluded my 2020 summer series that recapped by year the longest regular season offensive plays of the Pittsburgh Steelers from the last 50 years and I hope everyone enjoyed it as much as I did researching all of them and putting the posts together. Several plays brought back a lot of good and bad memories and I learned a lot throughout the course of the series as well. With this summer series now finished, I figured it would be proper to recap it and provide some final thoughts about many of the plays that stuck out along the way.

Thank you to all that followed along with this series. I hope it was enjoyed.

Missing: I was so fortunate to find video of so many of these plays in this series. Even so, there were three plays that I could not find start with the one in 1973 that included wide receiver Ron Shanklin catching a tipped pass against the Cincinnati Bengals. The two others I failed to track down were from 1975, quarterback Terry Bradshaw to wide receiver John Stallworth against the Buffalo Bills and 1999, running back Richard Huntley running 52 yards against the San Francisco 49ers. Hopefully at some point in the coming years I will be able to track down these three plays.

Shortest Longest – The 49-yard pass from quarterback Terry Bradshaw to wide receiver Dave Smith in a Monday Night Football loss to the Kansas City Chiefs wound up being the shortest longest play of the last 50 years. To make matters worse, that play should have been a few yards longer and even a touchdown as Smith tossed away the football before crossing the goal-line. It easily was the most dubious longest play in this series as well.

Longest Longest – Quarterback Ben Roethlisberger connected twice with wide receiver JuJu Smith-Schuster for 97-yard touchdowns in the last three seasons and those two plays are currently the longest offensive ones in franchise history. I now hope to live long enough to see a 98 or 99-yard Steelers offensive play.

Forgotten: The 2000 touchdown pass from quarterback Kent Graham to wide receiver Hines Ward wins my award for the most forgotten by me. That’s probably because I would like to forget all about that one season Graham played in Pittsburgh. He threw just one touchdown pass that season and that was the long one to Ward. Sure, I was just two-years old in 1970 when Terry Bradshaw connected with Dave Smith for an 87-yard touchdown against the Green Bay Packers and while I obviously don’t remember it happening live, I have seen the clip countless times before doing this series..

Unusual: The 2003 fake punt touchdown against the Baltimore Ravens that included punter Josh Miller throwing to safety Chris Hope behind the line of scrimmage is easily the most unusual play in this series. It’s also great on several levels because it includes Hope, Troy Polamalu and Ike Taylor all cutting their teeth on special teams. There are some great blocks that took place during that play and great running by Hope as well. What if that touchdown would have cost the Steelers getting quarterback Ben Roethlisberger in the 2004 NFL Draft?

QB Connections: in 1981, Terry Bradshaw connected with quarterback Mark Malone for a 90-yard touchdown against the Seattle Seahawks and at the time that was a franchise record. Malone had to play wide receiver in that game due to the Steelers having so many wide receivers out with injuries. That was the only reception of Malone’s career. In 1995, quarterback Neil O’Donnell connected with quarterback Kordell Stewart for a 71-yard touchdown against the Bengals. Much like Malone in 1981, Stewart had yet to really make his mark as a quarterback in 1995, his rookie season.

What If: The end-of-the-game multiple lateral play against the Miami Dolphins in 2013 wins the What If award from me. Had wide receiver Antonio Brown not stepped out of bounds, he probably still would have scored, and the Steelers would have won that game and likely gone on to make the playoffs that season.

No TD: The 2006 touchdown pass from quarterback Charlie Batch to tight end Heath Miller against the Miami Dolphins shouldn’t have been a score. Dolphins head coach Nick Saban clearly had enough time to challenge Miller being tackled short of the goal-line but failed to do so in enough time for the officials to see it before the extra-point was kicked.

Swann-less: It was a bit surprising that none of the plays from the late 70s or early 80s included Steelers wide receiver Lynn Swann on the receiving end. As it tuns out, Swann’s longest career reception was just 68 yards and it came during the 1980 season.

Fast Trick Pony: Steelers wide receiver Mike Wallace may have been known as a one-trick pony during his four seasons in Pittsburgh but even so, that one trick he had sure was fantastic. Wallace’s ability to stretch the field and deliver long touchdowns during his time in Pittsburgh is represented four times on this list of 50 plays from 2009-2012.

Best TV Call: Just prior to quarterback Neil O’Donnell connecting with Kordell Stewart for a 71-yard touchdown against the Bengals, Paul Maguire and Phil Simms essentially predicted the play to Dick Enberg on the NBC broadcast.

I Thought He Was Gone: I thought the 1979 run for 75 yards by Steelers running back Sydney Thornton against the Baltimore Colts really should have been a touchdown and especially after he blew past the first and second level defenders. I don’t remember Thornton having that kind of speed and burst but both were evident on that play. A Colts rookie cornerback caught Thornton from behind on the play and prevented a score. Thornton admitted after the game he ran out of gas at the end of the long run.