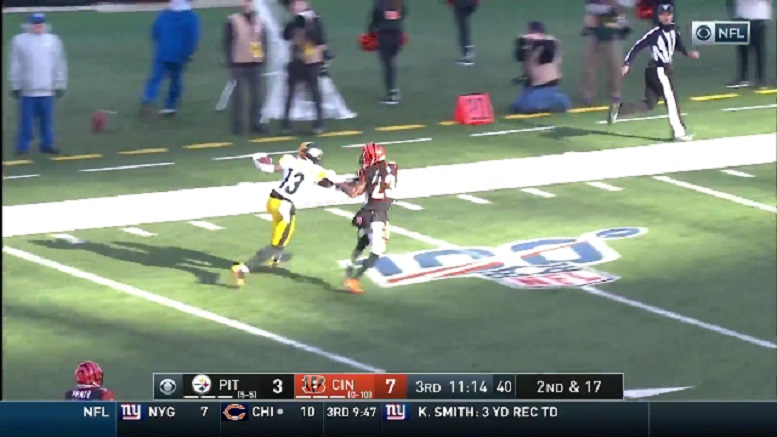 This series now continues with the Steelers longest offensive play of the 2019 regular season, which came in Week 12 of the season against the Cincinnati Bengals and at Paul Brown Stadium in Cincinnati, OH on November 24. The play, a 79-yard pass completion from quarterback Devlin Hodges to wide receiver James Washington for a touchdown, came on a second-and-17 play with 11:22 left in the third quarter and with the Steelers trailing the Bengals 7-3.

On the play, Washington, who was initially lined up outside of a bunch on the right side of the offensive formation, ran a deep post post route after stemming outside off the line of scrimmage. Hodges connected with Washington near the middle of the field and at the Cincinnati 47-yard-line in front of Bengals cornerbacks B.W. Webb and William Jackson III. After making the catch, Jackson fell down and Webb then attempted to run after Washington to the left side of the field and he had the better angle to possible make a tackle. Washington, however, managed to push Webb to the ground with a stiff-arm at the Bengals 25-yard-line and then ran uncontested into the end zone for the touchdown.

The Steelers went on to beat the Bengals in that Week 12 game 16-10 and Hodges went on to be the team’s starting quarterback for the remainder of the season.

Below is a video of the Hodges 79-yard-touchdown pass to Washington against the Bengals in addition to a short video that recaps the game.