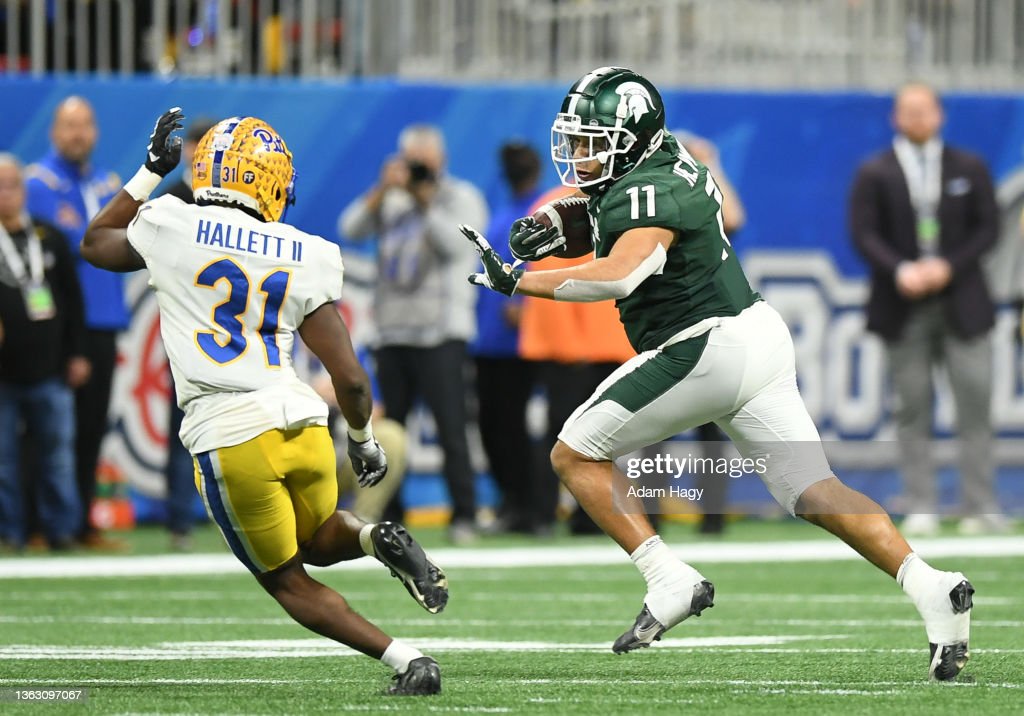 From now until the 2022 NFL Draft takes place, we hope to scout and create profiles for as many prospects as possible, examining their strengths, weaknesses, and what they can bring to an NFL franchise. These players could be potential top 10 picks, all the way down to Day 3 selections and priority undrafted free agents. Today, I’ll be profiling Michigan State H-Back Connor Heyward.

— Stocky build with big, broad shoulders
— Versatile player who wore lots of hats, did it all in school (RB, FB, slot, H-Back, in-line TE, split out wide in empty)
— Shows soft and natural hands, easily plucks away from his body
— Makes difficult catches and adjusts outside his frame, asset in the passing game
— Clutch player who seemingly came up large in go-to situations as a blocker or receiver
— Willing blocker able to stalemate on the LOS but shows effectiveness as lead blocker in second level or out in space
— Good-energy bringer on the field, fiery emotion
— Comfortable playing all over the field
— Shows power as a runner/receiver and tough to bring down one-on-one due to size/strength, able to break tackles and get YAC
— Build-up speed runner but able to run away in open field with surprising top-end speed, especially earlier in his career as more of a true running back
— Selfless teammate who changed positions and took less prominent role in offense
— Has special teams experience and will immediately add value there as a rookie
— Great football bloodlines

— Lacks true position or fit at next-level, saw work as in-line tight end in school but lacks size or length to remain there in the NFL
— Stocky, big build makes him a rigid player who doesn’t easily change directions, takes more steps to gather self and move laterally
— Gets overwhelmed with in-line work in run and pass game, loses early on and defenders able to get into his pads because of his lack of height and length
— Not a dynamic or explosive runner
— Lacks nuance in route tree and best running straight and against zone coverage
— Slightly older than typical prospect

Has there ever been a Day Three selection as often mocked to the Steelers as Connor Heyward? It’s easy to see why. The last name says it all. But putting aside the bloodlines, Heyward as a player was actually pretty fun to watch for a H-Back type.

It’s difficult to quantify but it felt like anytime the Spartans needed a clutch play, Heyward was the dude who made it. I know Michigan State had other talent, RB Kenneth Walker had one heck of a year, but Heyward came up large again. Against Pitt in the Peach Bowl he had a 4th down catch and converted a fake punt as the Spartans’ upback.

He also made a sensational grab on a seam ball. Adjust, high-point, make the grab in traffic.

Overall, Heyward has consistently shown soft and natural hands out of the backfield. I first watched it at the Senior Bowl in his 1v1s against linebackers. He’s able to pluck away from his body and adjusts to balls thrown outside his frame or make catches over the middle with bodies on him.

I watched him a bit as a runner and he showed some long-speed. He isn’t a dynamic back but he’s good in a line and when he gets going, Heyward can move. Watch this long, 80-yard TD against Maryland back in 2018, beating the safety with the angle and outrunning everyone into the end zone.

On the negative side, Heyward is a big, broad body who doesn’t have great change of direction skills. He takes extra time to gather himself and move laterally and is best when he can run downhill.

Finding his true NFL home is a tricky evaluation too. He won’t be a singular position-guy. Though Michigan State used him as an in-line blocker, he struggles due to a lack of overall size and length and guys are able to get into his pads and control him. Watch him get bulled back here by the ROLB. Tough assignment but it’s not going to be an easier in the NFL and Heyward isn’t suited for that more in-line alignment/responsibility.

He’s not going to be a TE at the next level and he won’t be a full-time runner either. At the Senior Bowl, he largely worked as a fullback and that’s the best home for him. He can – and should – be moved around the formation and offenses need to take advantage of his versatility to wear lots of hats. But he’s a bit-piece of an offense, not the focal point. And is he good enough to warrant teams trying to find ways to get him on the field outside of obvious, goal-line/short-yardage situations? Heyward absolutely offers something in the pass game but when you have high-draft pick receivers and tight ends, how much are you scheming for your 230-pound fullback to get the ball?

I do like his fit for the Steelers bootleg/rollout offense. And Heyward should make an immediate impact on special teams right away. I think there’s a home for Heyward but he’ll have to scratch and claw to stick on the roster. My NFL comp for him is former Atlanta Falcons’ fullback/running back Jason Snelling, a 7th round pick with a similar build who carved out a seven-year NFL career as a runner, receiver, blocker, and special teamer.