Breakdown of my 51st and final full scouting report. Hope you’ve enjoyed them. Another prospect the Steelers brought in for a visit. Arizona cornerback Shaquille Richardson.

– Length and frame to grow into

– Above average athlete with enough speed for the position

– Some ball skills, tracks the ball in the air well and can high point the football

– Won’t completely run away from contact, will mix it up to a certain degree

– Lean player without much bulk

– Leads with shoulder too much, doesn’t bring his arms with him

– Prefers to cut the ballcarrier than wrap

– Times where he shows lackluster effort

– Results him in missing too many tackles

– Ejected and suspended for altercation in 2011 for fight against UCLA

Full disclosure – I only got to watch two games of Richardson. Attempted to watch a third game against Oregon but the video is badly messed up and virtually unwatchable. Not many Arizona games floating around online. Must be that East Coast bias. So that’s a bit disappointing for the final scouting report. And while I’ll sound like a broken record, that must be taken account when reading this report. Less games watched, harder it is to accurately judge a prospect.

Does possess the frame that you like to see in a corner. Long body and seems to have plus length. Richardson is a solid athlete with the speed and quickness to play the position. Workout numbers match up with what I see on tape.

Had one of the sickest plays in college football last year, tipping this ball back in bounds to be intercepted by a teammate. From the Oregon game before the video got put into a blender.

In the clip below, plays the fade as well as you can. Reads the stem, watches the hands of the receiver, and plays the pocket when the receiver extends. Breaks the pass up.

He had a productive career with the Wildcats and was considered their best corners. Two years with at least three interceptions and even though he had just one in 2012, he recorded 14 breakups, good enough for Top 20 in the nation.

Comes with a tiny bit of versatility. Strictly a right corner in the two games I saw but he was moved to a safety/rover position in some third down subpackages. 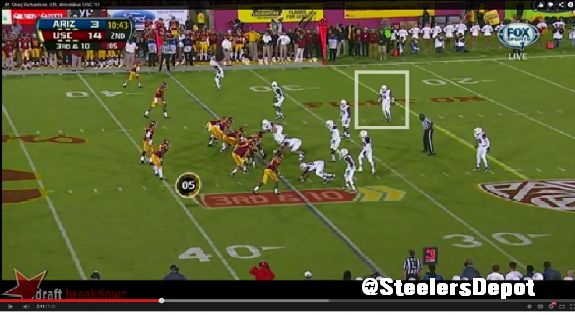 Like so many other cornerbacks I profiled, Richardson is deficient in his tackling ability. He’ll occasionally seek out contact but the results are usually never good.

Starts with his bulk, or lack thereof. Lean build without much muscle, leading him to getting pushed around with ease. Borderlines on being bullied by wide receivers.

Asked to blitz off the edge on 3rd and 2 against Washington State. Gets shoved to the inside, trips, and falls with the running back having a clean path to the edge, converting the down. Richardson is #5, at the bottom of the screen.

In a word, he’s weak. In another, really weak.

Compounds this problem by not being a sound tackler. Prefers to lead with his shoulder or cut the ballcarrier down. Both ways are ineffective and makes him prone to whiffing.

We’ll start the montage with still shots of a cut attempt Richardson misses on against Washington St. 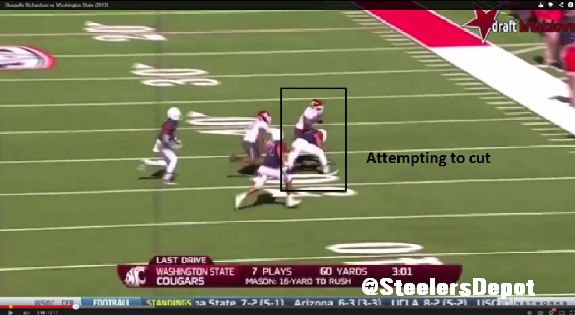 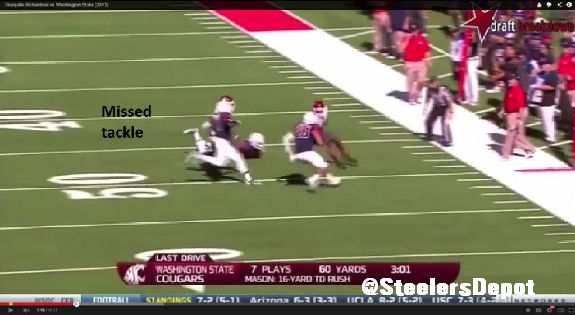 His decision to cut block against USC allows the running back to dive over the top and fall into the end zone.

Clip of him leading with his shoulder. Ends up missing again. 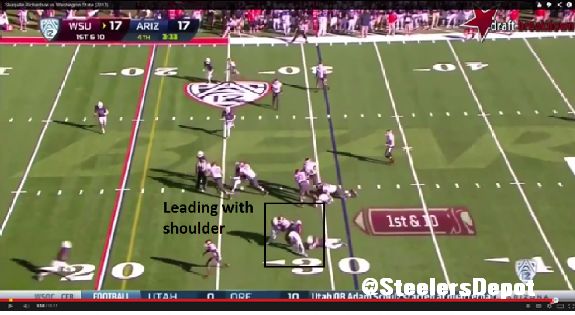 Richardson at the top of the screen in the clip below. Gets pushed back seven yards by the receiver’s stalk block. Plays comes on 2nd and 3 with the game essentially on the line. Not a “big time” play from Richardson.

Flat out don’t like his effort here. Has the receiver sized up but lets him get the edge. All Richardson attempts is a dainty push after the receiver has passed the sticks. Came on a 3rd and 5 with the game tied late in the third quarter.

Ideally, Richardson has matured as he’s gotten older and had a child but there were definitely questions to be answered early in his career. The reason why he was ejected in the UCLA is murky. A video here doesn’t glean much of an answer aside from one or two pushes enough from Richardson. You can check out an article here with the details of the punishment.

Always disappointing to see a prospect fail to make the all-conference team. Richardson didn’t even warrant an Honorable Mention from his 2013 play. Not the say-all, end-all by any stretch but concerning when a college prospect can’t even do that.

There’s a tiny bit of merit to drafting Richardson late. Because of his frame and glimpses of physicality, you can try to coach his technique and get him to be more aggressive.

But that’s a relatively faint hope to go off of. I know I’m picky about corners but the Steelers’ would be better served to look elsewhere.

Enjoy the draft, everybody.