– Ability to fall forward and crank out extra yards

– Doesn’t dance, one-cut runner, prides self on running downhill to maintain the little speed he owns

– Above average job in pass protection

– Versatile, lined up in the slot as a receiver

– Severe questions about talent as a runner transitioning

– Lacks defining quality as a runner

– Slow in his cuts and change of direction

– Not an asset outside of the tackles

– Frame causes him to run too high

– Essentially only one year as the starter

– Played at Lackawanna (PA) JUCO for two years prior

– Missed season opener in 2012 with an injury

– Torn ligament in right thumb senior year of high school, played through it wearing a cast

On the good, he is your typical downhill runner that is capable of delivering a blow. Shows the leg drive to keep the pile pushing and grind out tough yards.

This is really Taliaferro at his best. Patience to wait for his blocks to develop, one-cut downhill, and fall forward through contact into the end zone.

I first noticed him at the Senior Bowl standing out in pass protection drills. And as I noted in my report, he’s better in that area than most. But in the relatively limited look I got, no play that really stood out.

Stays with his block and ends up burying the defender into the ground.

Was asked to do some more advanced concepts out of the backfield. Like chip and then release out as a checkdown option.

Soft hands and a really good route runner for the position and his size. Love this catch on 3rd and 3 to keep the drive alive.

They would occasionally split him into to the slot. Dating back to his JUCO days, he could serve as a kick returner. Has versatility. 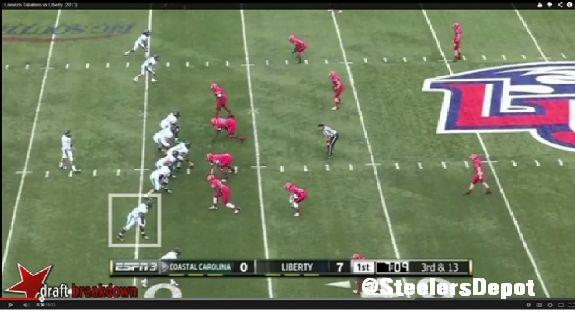 Something he’ll need because I don’t see a true running back. He barely had speed at the FCS level. Unlikely to magically get better on Sundays. It’ll regress because of the level of competition. Fearful of him becoming a plodder who is really only an asset between the tackles.

This is a first down run but look how slow he is at planting his foot and changing directions to get upfield. Hips are very stiff.

Look how high his body is as he cuts back to the left. Doesn’t shake the defender and gets pushed back.

At a glance, it looks like he only had four carries that went for more than 30 yards. At that level, it’s a tad disappointing.

He’s Brian Leonard-esque. A player who can carve out a niche role as a blocker/receiver and occasional runner inbetween the tackle but he doesn’t look to stand much of a chance as a full-time running back.

Games Watched: at Liberty, vs Presbyterian (Half), at Montana