Another look at one of the top rated players in the 2014 draft. South Carolina defensive end Jadeveon Clowney.

– Big frame with superb length and a long strider

– Freak athlete, shouldn’t move that well for his size

– Commanded double teams, had to always be accounted for

– Extremely disruptive, made teams pay when they left him unblocked/tried to read him

– Solid strength, holds his own at the POA against the run

– Good awareness, gets his hands up and uses length to take away throwing lanes

– Some experience stunting and dropping into coverage

– Must work on his repertoire

– Tries to swim to shed in the run game, exposes his chest and can get pushed around

– Height can be a curse sometimes

– Difficult to bend around the edge on speed rushes, shows some stiffness in his hips/ankles

– Will pop up too high when he uses bull rush

– Some questions over his motor

– Statistically speaking, had a down 2013

– Minor off the field issues

– All-American in 2012, finished 6th in Heisman voting and won Hendricks award for the best DE

I’m not going to rely on “once in a generation” clichés but it’s clear Clowney is a freak, rare athlete. There’s a lot of minor areas he needs to work on, but the positives in his game are as good as you’ll find for a player at his position.

Against Tennessee, the Vols foolishly leave Clowney unblocked and try to kick him out with the right guard. Clowney can’t finish the tackle but disrupts it and the back goes for a big loss.

This play against the run that really encapsulates the type of athlete he is. To get cut by the pulling tight end, be able to find the ballcarrier, and make the tackle is nothing short of impressive. That type of quick-twitch play is what makes Clowney so special.

As noted, he’s got a deadly swim move. Blows by the left tackle and puts a hit on Clemson QB Tajh Boyd.

But as lethal as his swim is, it’s become a crutch for him. Especially when trying to shed in the run game. He doesn’t look to use that length to get into the pads of the lineman and then shed. Tries to dance around them.

And because of his size, when he swims to the inside, his torso opens up. The right end in this animation below.

Had the offensive tackle not screwed up his hand placement, he would’ve been able to get into Clowney’s chest and take control. He still gets by on his play because of his athleticism but it isn’t always going to be that easy at the next level.

Coming off the edge, he tries again but is a bit stiff and can’t get around the edge.

The height gives him his supreme length and Is what makes him a freak but it creates stiffness in his game. Why he needs to work on his leverage on his bull rush because trying to speed rush may be an inconsistent move his whole career. Even for Clowney, tough to “defeat” being so tall.

But you’ll also notice the running back was in position to help out. Clowney wasn’t a secret in 2013. Reason why his numbers dipped.

Sticking with the negatives, some minor things to clean up against the run. He has the strength to hld the point but needs to work on using that length to his advantage. Hand placement needs coached up; they’re often too far to the outside. 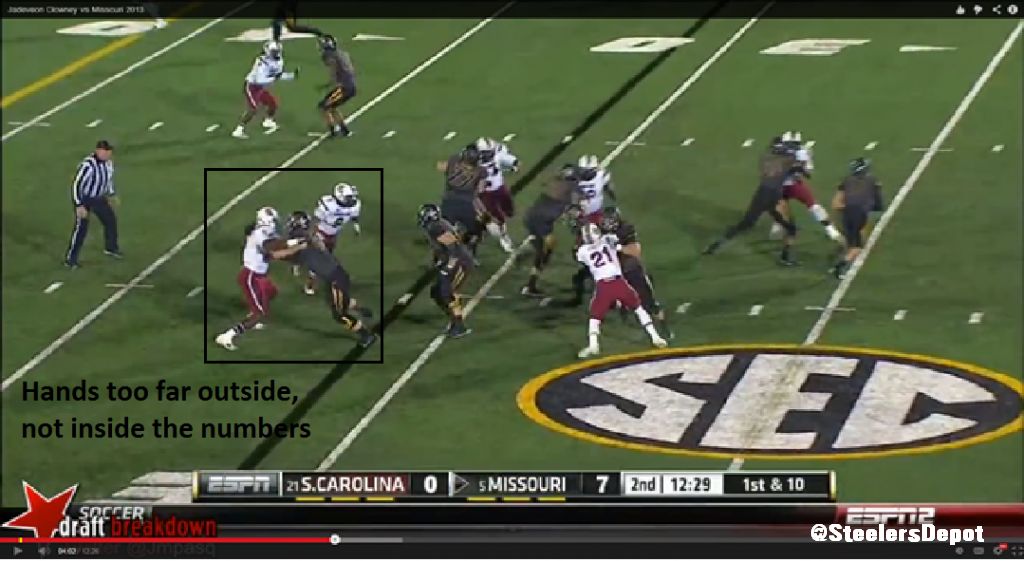 And moments where he short-arms it and can get out-leveraged. Again, height makes things a bit difficult. Pad level will be something he has to rep. Develop that muscle memory so he stays low out of his stance. 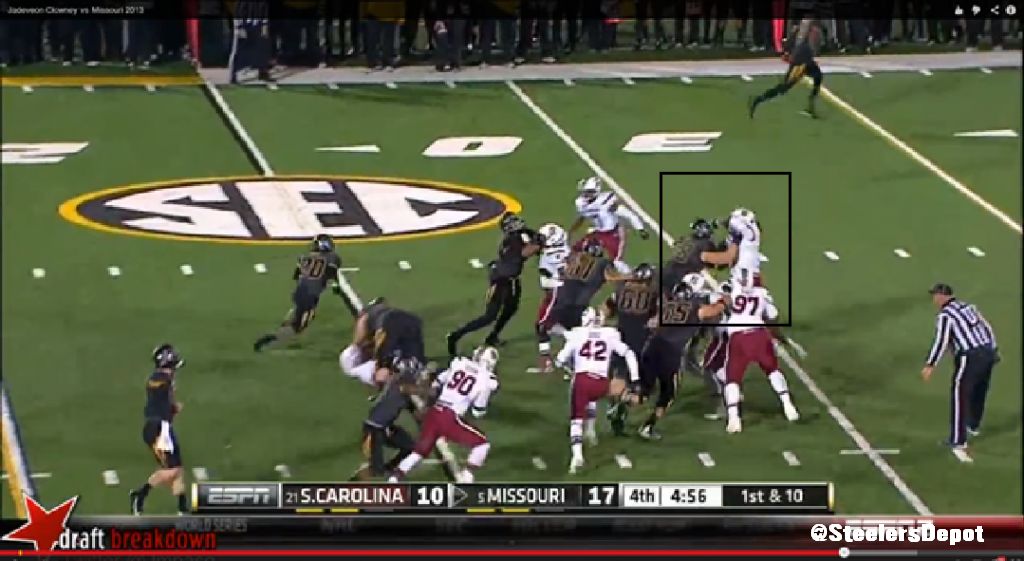 After the absolutely fantastic sophomore year, he junior year was under the microscope. Consequently, the media was more critical of him. His motor was questioned from Week One and he sat out the Kentucky game causing a stir. He’s also been caught for speeding twice. All events that relatively speaking, are overblown and won’t affect his stock very much. There were instances where I would have liked to see him chase down plays but it isn’t anything too serious.

The Steelers are obviously not in the mix for Clowney and he profiles as a 4-3 end than playing in a 34. But this draft series is also to cover the best players in this year’s draft and the defensive end from South Carolina fits that bill to the letter.

Games Watched: at Tennessee, at Missouri, vs Clemson