A breakdown of one of the biggest men in the draft. Notre Dame nose tackle Louis Nix III.

– Nimble feet and quick off the ball

– Can penetrate and be disruptive against the run

– Can hold POA vs double teams

– Active hands as a pass rusher

– Could be struggling with his weight, appeared to play heavier senior year

– Will pop up too high off the ball

– Won’t always stay square to the line, can get turned and washed

– Has trouble getting off blocks, can get stuck

– Gets overextended rushing the passer, won’t always bring lower half

– Doesn’t always show the strength he has

– Reportedly weighed 368 pounds when he arrived at Notre Dame

Admittedly, Nix is a tough prospect to figure out. Watching him in 2013, you could tell he was a quicker athlete than most guys at his size. But then I put on the championship game against Alabama in 2012, and he looked a lot quicker and slimmer. Maybe due to being fresh after having so much time off. Or  a result of the intensity of the game. But watch him run down this screen.

And just comparing him with still shots, albeit not the most reliable method out there, he looks bigger in 2013 than 2012. The angle complicates matters but he did look bigger. 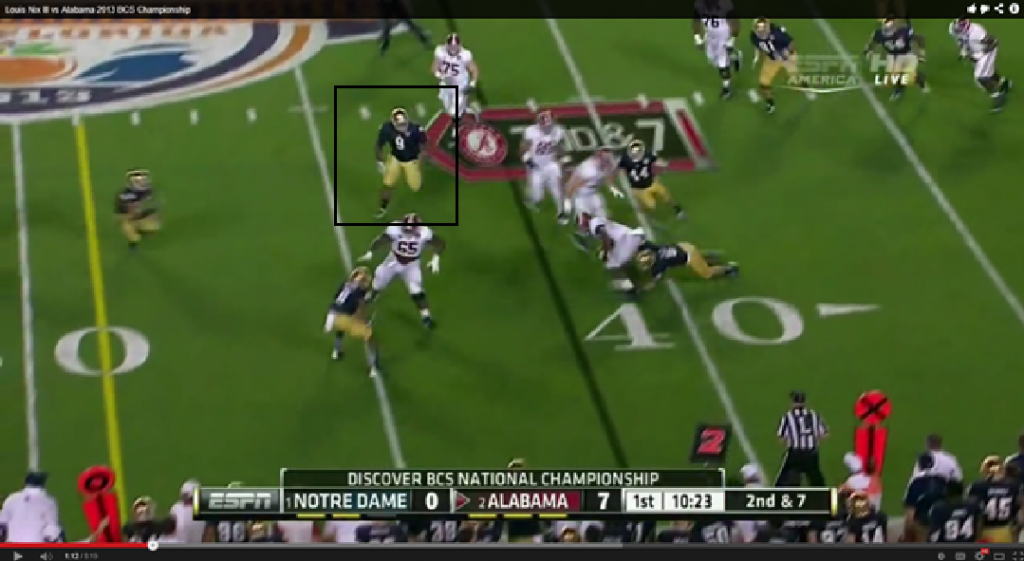 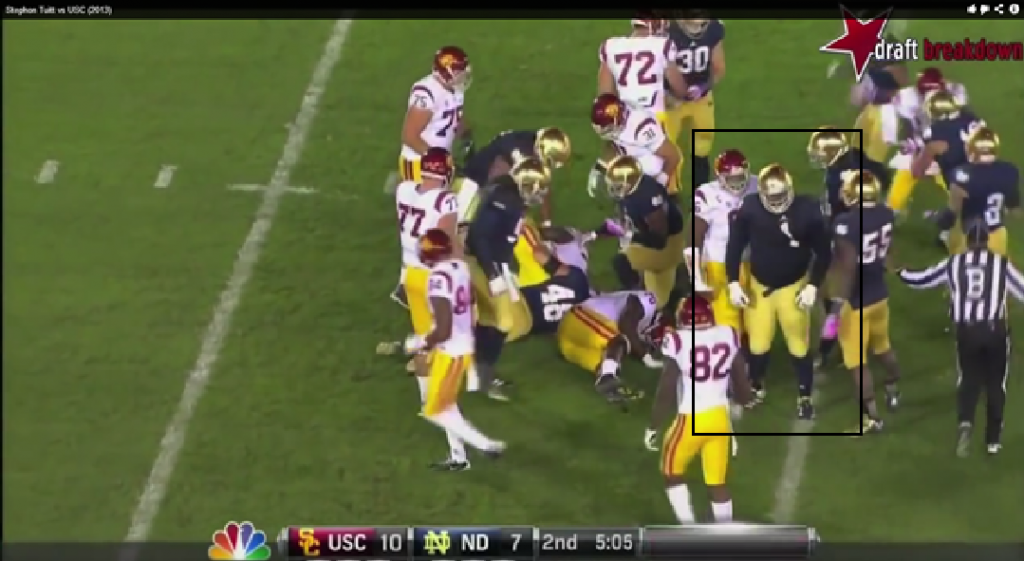 I didn’t study his tape in 2012 as extensively as I did in 2013 but seeing his inconsistencies orignally led me to think he got sloppy with his weight, ballooned up, and played hot and cold.

He’ll flash at one moment

tossing away the smaller center

flashing that first step while swimming over the center, not allowing the guard to scoop block him and making the tackle on 3rd and Goal

And then look like a 7th rounder in others

There he is getting turned and washed by the right guard. Has to stay square in order to shed.

But the other element to consider is the knee. It explains his play. The three games I watched was the 2012 championship game against Alabama, an early September game against Michigan, and a mid-October matchup against USC.

Against Alabama, he was his most athletic. Versus Michigan, he looked a little worse. Then his most lethargic against USC. He missed the next two games due to his knee, gritted it out versus Pittsburgh, and then went under the knife following that game.

It stands to reason the knee dogged him, hampering his play. The player I saw against Alabama is the one I want to see all the time. Getting his knee right is a big step towards that goal. It’s all connected. If your knee is bulky, you can’t explode off the ball. If you can’t explode off the ball, you won’t generate a push (especially when your arms are short and it’s tougher to engage). If you can’t get a push, you’re vulnerable to get washed. And it’s hard to anchor and hold the point when your lower body is fighting you.

His weight does scare me. Even with the knee, I don’t like the fact it looks he came into the season looking heavier. There was no need to add weight after the 2012 season. He was plenty big already. It’s commendable he lost over 40 pounds early in his career but maintaining a healthy playing weight will be an issue to address for whatever team drafts him.

And then there still are some technique issues to be worked on. Chiefly staying square to the ball. He’ll need it with some of the two gapping he’ll likely be asked to do.

It’s a separate discussion but Steve McLendon is capable of being the Steelers nose tackle.  The position isn’t as big of a concern as some make it out to be. So it’d be surprising to see the team take Nix or address the position in the early rounds.

Refer to Bill Parcells’ “Planet Theory”.  There are only so many big men in existence that can move well enough to last in the NFL. That’s what makes him special. In short, get Nix healthy and back to his old playing weight and the consistency will improve.  Then you’ll have a starting nose tackle on Sundays.

Games Watched: vs Alabama (Bowl – Junior), vs Michigan, vs USC