With the regular season over, our focus has shifted to the offseason. For the next few months, I’ll be providing scouting reports on prospects. Some the Pittsburgh Steelers may look at along with other top players that will be off the board before they select. All to make you as prepared for the 2014 NFL Draft as possible.

To kick things off, a seemingly surefire Top Ten selection. From Buffalo, outside linebacker Khalil Mack.

– Sheds blockers and rarely stays engaged as a pass rusher

– Commanded double and even occasional triple teams as a pass rusher

– Hips appear to be fluid in coverage, has experience dropping

– Holds own at Point of Attack against TEs, but can get swallowed up against OTs

– Will get swallowed up against the run

– Misses a few tackles he should make

– Winner of 2013 Jack Lambert Award, given to nation’s top linebacker

– 2013 runner up for the Dick Butkus Award, finishing ahead of Anthony Barr

– Mostly saw time at SAM linebacker, did play with hand down in some subpackages

Obviously, you can tease out my impression of Mack. He’s a quintessential pass rusher, drawing comparisons to former #2 overall pick Von Miller. The fact that he has speed and the sacks isn’t what enamors me to the Buffalo product. It’s how refined he is as a pass rusher. Mack doesn’t need to be taught moves or work on counters; he’s already exhibited them on a consistent basis.

Focusing on his toughest competition, Ohio St, check out the leverage he gets on right tackle Taylor Decker on back-to-back plays. 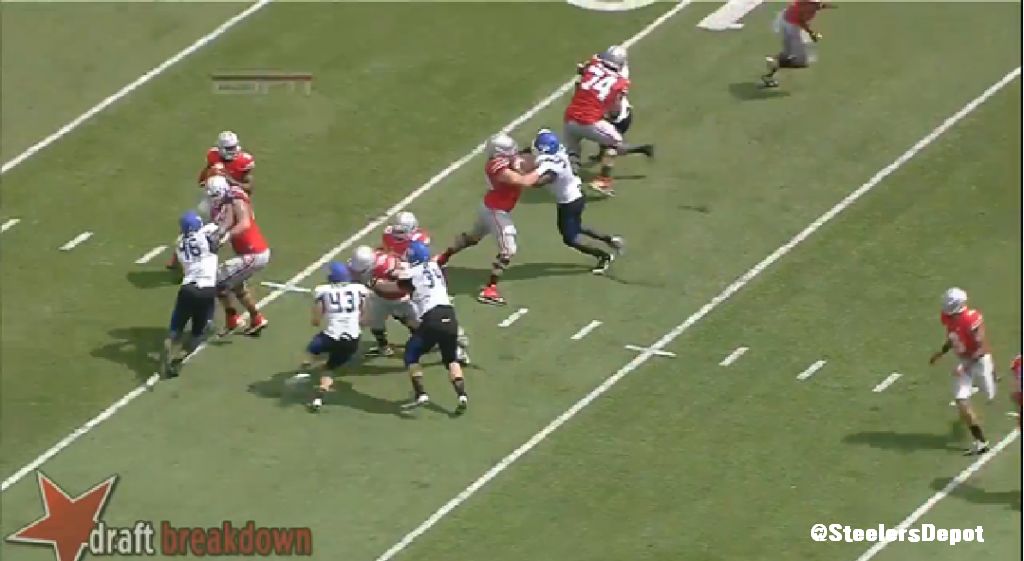 And then he sheds to record the sack. 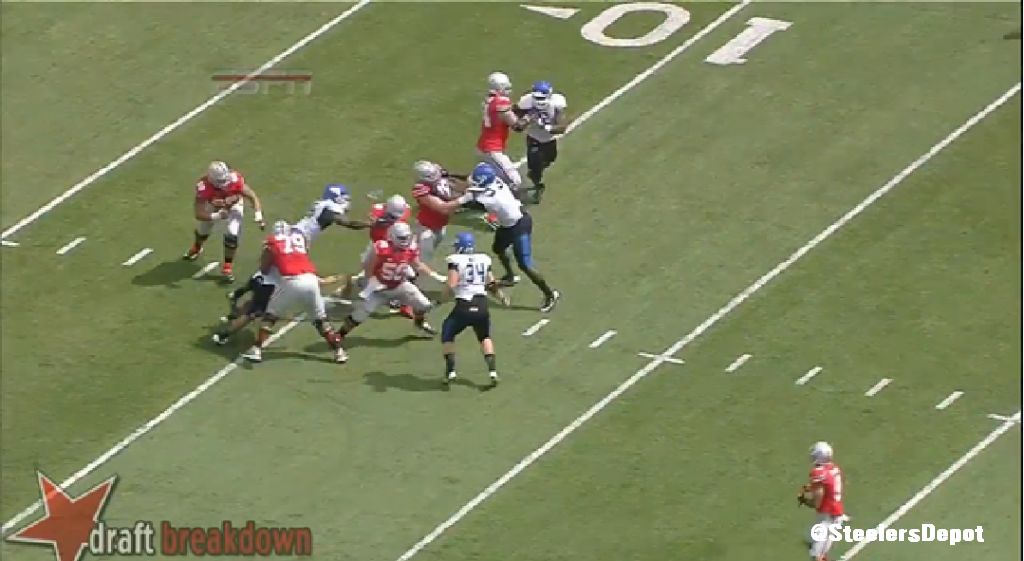 *Pictures and video courtesy of Draftbreakdown.com

He puts Decker on skates the following play, putting pressure on Braxton Miller.

Later in the game, he shows his athleticism, fighting off the cut block, intercepting the screen, outrunning Miller and running back Dontre Wilson, diving into the end zone for the score.

Bear in mind that is the 248 pound Mack outrunning a 180 pound running back 45 yards to the house.

He may be perceived coming from a “small” school but did big things against top teams. In the bowl game against San Diego State, the Aztecs repeatedly ran away from him and double-teamed him with a tackle and running back. Their plan was to not let Mack beat them, a compliment of the highest order.

The biggest complaint to his game is difficulty shedding blocks against the run. That coupled with his lack of height makes him best suited to play outside linebacker in a 3-4 scheme.

Mack will be one of the first, if not the first, defenders off the board in May’s draft.