– Huge frame, possesses big lower half and a lot of length

– Sticks to his blocks

– Plays with a mean streak and looks to finish his blocks

– Shows good bend for his size off his kickslide, capable of getting his butt down

– Hand placement all over the place

– Gets grabby in the run game

– Initial punch is too high and usually not very strong

– Exposes his chest, lets defensive ends into his pads too easily in pass pro

– Phone booth blocker, does not do well in space and struggled when asked to reach block in ISU’s zone blocking scheme

– Slow off the snap in both phases

– Moved to defensive tackle shortly before transferring to ISU

– 36th ranked lineman by Scout.com coming out of high school

Illinois State was kind enough to share game tape with me, giving me a chance to evaluate him. Aladenoye is not a “big” name but is getting some love as a small school sleeper though not to the degree of players like North Dakota State’s Billy Turner. NFL Draft Scout currently has the former Redhawk ranked as their 42nd tackle.

Though to be clear, it’s painfully obvious he’s going to have to move to guard. Even Illinois State’s head coach said as much noting, “I think he would be a very good guard in the NFL. Some people are looking at him as a right tackle. He doesn’t quite have the speed for left tackle.”

He’s not as talented and won’t go nearly as high, but I get a Mike Adams feel with Aladenoye. He’s a powerful run blocker that uses his size well as noted above. Watch him (#73, playing at left tackle) run the end down the line against Ball State, letting his running back go for a big gain.

He flashes his mean streak later in the game.

Whever he lands, he needs to play in a power scheme that won’t ask him to execute many reach/scoop blocks or get to the second level very often.

But there are many technique issues to be fixed and until that point, he’s going to struggle in pass protection. Hand placement the biggest worry.

Two stills of his hands way too high, grabbing the facemask of the defensive end. 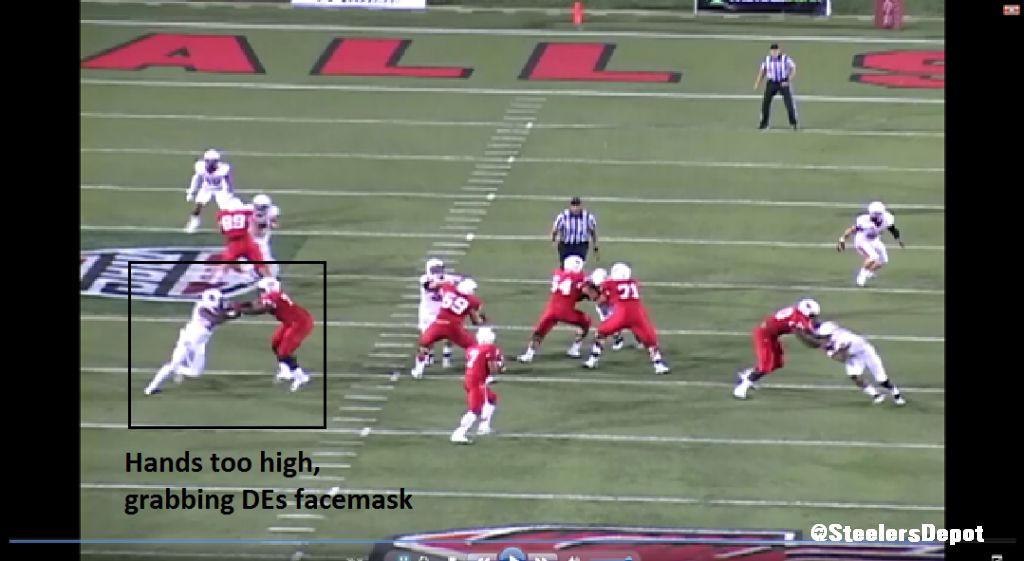 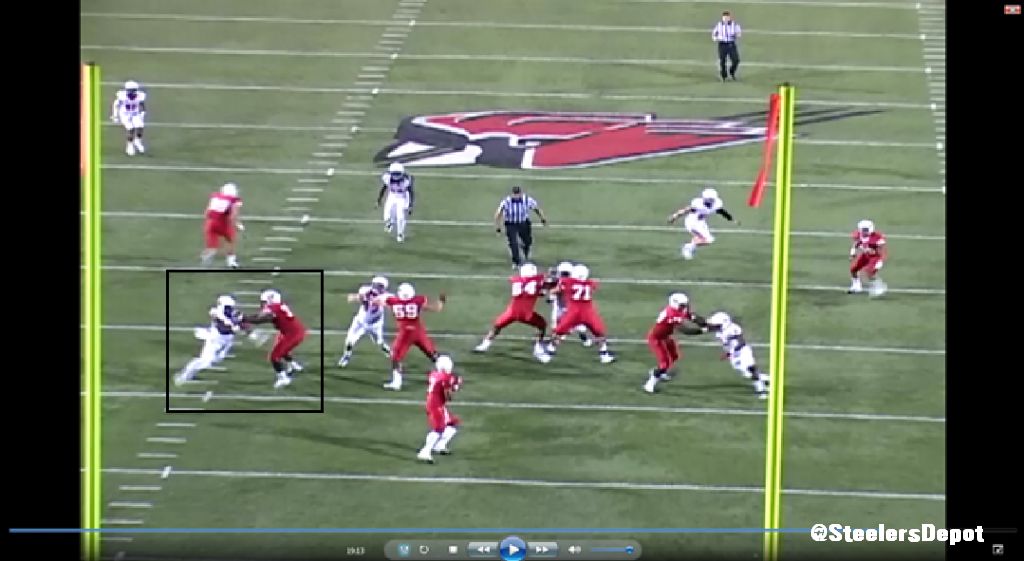 And an animation of him literally taking an end’s helmet off late in the Ball State game.

That more than the lack of lateral movement is why he has to move inside to guard.

Now, obviously, it’s something that could be corrected with good coaching and a strong work ethic. But he is a project and at best, a late Day Three selection.