Today, a report on Auburn Tigers outside linebacker Dee Ford.

– Closes quickly to the ball

– Good awareness, gets his hands up and is a good leaper

– Experience rushing out of two and three point stance

– Undersized and lacks muscle, doesn’t appear to be able to add much more

– Lacks nearly any repertoire aside from speed/dip

– Leads him to getting pushed upfield if he can’t win off the edge, lacks counters

– Will get jumpy on the snap count

– Medical red flags, has yet to play a full season

Full disclosure. This is me ragging on another Auburn player but I swear I’m not an Alabama fan (I’m an Idaho Vandals fan so feel free to mock me for that).

Ford compares to Aaron Maybin. Severely undersized player whose great get off is an asset in college. Tough to translate to the next level when you don’t have any other moves and most starting tackles can seal the edge.

At first, I was excited about Ford. Blown away by his get off when I first put on the tape. This was the second play I watched.

Wow! Terrific bend, got around the edge and finished with a sack/forced fumble of Aaron Murray.

And then it turned into Groundhog Day. The same move over and over again. He’s a predictable pass rusher. In the second half against Georgia, the Bulldogs ran a QB draw knowing Ford would take himself out of the play rushing upfield. That’s exactly what happened and Georgia scored. 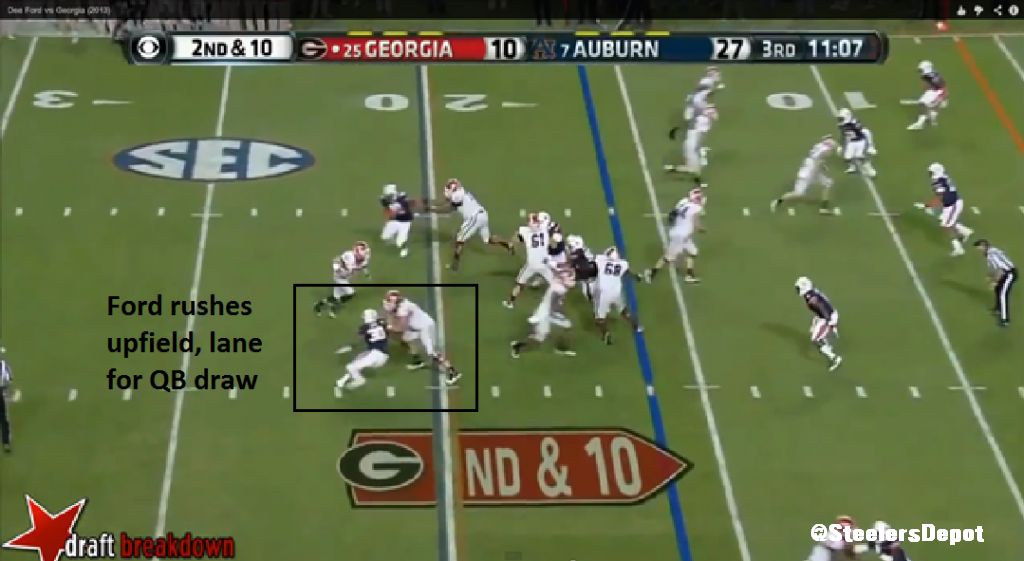 Following that, Ford was forced to calm down and mix in some other rushes. He couldn’t generate a lick of pressure.

I saw him struggle against the run versus Georgia. So I threw on the tape of what would be his toughest test – Alabama. Predictably, he struggled. Unable to hold the edge here.

And he continued to show his lack of moves, losing the battle to the right tackle badly on this pass rush attempt.

Can’t get off the block on the first play of the title game. The back goes for a big gain.

He is a talented pianist and you can check him out playing in this clip.

Not going to really help his draft stock but a nice reminder that there are more to these guys than 40 times and sacks. Check it out, he’s pretty good.

Stats usually don’t tell the entire story but his 2013 line indicates how one-dimensional he is. Exactly half his tackles were for a loss. Meaning, unless he’s able to disrupt in the backfield, he’s otherwise invisible.

All the nicks he’s had doesn’t instill confidence either, especially at his tiny size. He jumped offsides three times against Georgia, including with less than 20 seconds left and the Bulldogs driving in a one score game.

From my view, he doesn’t have much experience dropping into coverage. Considering he has to be an outside linebacker in the NFL for an odd front, it’s another issue.

Ford’s athleticism is pretty but he’ll be nothing more than a situational pass rusher in the NFL. Like his teammate Greg Robinson, overrated if you’re considering Ford a Day One prospect.

Games Watched: vs Georgia, vs Alabama, vs Florida St (Bowl)