Breakdown of our first guard of the year. Penn State’s John Urschel.

– Overall, does a good job of getting his lower half churning, in sync with upper body

– Works hard to get his arms extended in the run game

– Good athlete who can operate in space

– Strength to anchor in pass protection

– Nasty to his game, finishes his blocks and plays to the whistle

– As smart as they come in the classroom

– Highly decorated career on and off the field

– Can lean in pass pro

– Not a top notch athlete

– Only played one position

– Has had two scholarly articles published

– Face painted on Penn State mural next to Sue Paterno

– Captain on high school football team as a senior, three-time captain on track and field team

I definitely had to be weary of “lazy scouting” with Urschel. It’d be eay to see a guy who is smart in the classroom while not having a particularly intimidating build on the field and call him what most might: a smart, tough, technician, who isn’t going to offer anything as an athlete. A phone booth blocker.

And my report does state some of those very things. But instead of starting with that, I want to recognize that Urschel is a good athlete. Probably more than he gets credit for.

Downfield block on this screen to spring the running back for a large gain. Urschel is #64, the right guard for the Nittany Lions.

Works to the linebacker, sticks, and drives him downfield, taking him out of the play.

Penn State ran a ton of inside zone and Urschel was asked to reach and scoop block a lot. Bad athletes can’t succeed in that scheme. He did.

Takes good angles and really does a nice job getting his hips into position. Lets him seal with easy and he routinely opened up big running lanes in Happy Valley.

And some still shots to show it. 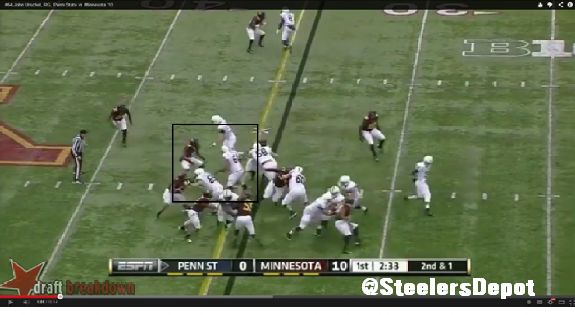 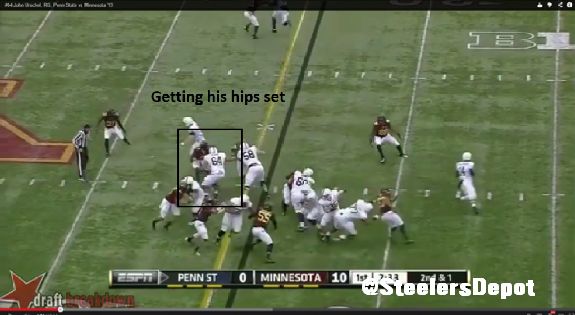 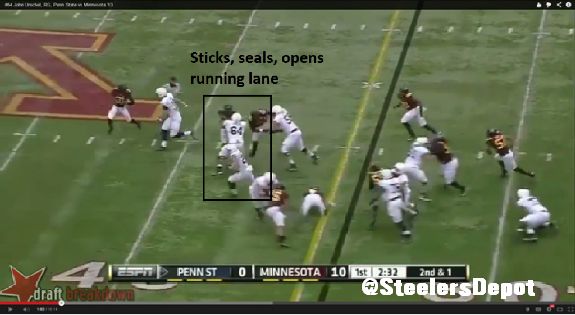 Effort and second level blocking on the first play against Minnesota.

I listed a novel about the accolades he earned in the classroom. Would doubt you’ll find a smarter player in this class than John Urschel. Absolutely remarkable list.

As noted, he’s had two papers published. One entitled, “Instabilities of the Sun-Jupiter-Asteroid Three Body Problem” and the other, “A Space-Time Multigrid Method for the Numerical Valuation of Barrier Options.”

You get the idea. Wicked smart.

Multi-time captain also speaks well for his character and you’d have to think teams fell in love with him during the interview process.

Of course, he does have his flaws. Not a top notch athlete. Will struggle in pass protection against quick defensive tackles. Prone to getting beat.

I think Urschel would fit in just fine with the Steelers, who hope to re-implement their zone blocking scheme under Mike Munchak. System Urschel will be very comfortable in and he has the skillset to succeed in it. Offensive line is not a priority that some draftniks may make it out to be, but depth is an issue. Given his value, in the back half of Day Three, it’s a worthwhile selection.

Games Watched: vs Kent St, at Ohio St, at Minnesota