We have shifted our focus completely to the draft and for the next several months we will continue to provide scouting reports and breakdowns of several prospects. Some of these players the Pittsburgh Steelers may look at while others will be fits for other teams. We do this to make you as prepared as possible for the 2014 NFL Draft.

Today, we will look at Colorado State DE/OLB Shaquil Barrett

– Only 21,but very mature for his age and a team captain

– Understands hand placement and uses them

– Nice dip and rip move with some bend to him

– Doesn’t have a well-defined build. Might could stand to drop down to 250

– Can get swallowed up by big tackles

– Uses shoulder too much inside instead of staying square to LOS

– Not great in coverage outside of zone flat drops

– Footwork needs work as he will occasionally include false steps

– Play recognition could be a little better

– Could stand to get a little stronger

– Ranked 5th in the nation in tackles for loss with a Mountain West record 20.5

When you put on the tape of the game against Alabama, the first play that will stick out to you includes Barrett setting the edge against left tackle Cyrus Kouandjio. It forces the pulling guard to go a long way before turning up and thus throws the timing of the play off that ends with the defensive back registering a tackle for a loss. Look at Barrett’s hand placement, arm extension and strength in action against a top-rated left tackle.

While Barrett doesn’t possess a consistent quick get-off, he is effective below at fighting off a tight end block and getting through the gap to get in on the tackle. One of his strong suits I have noticed in watching his tape is his consistent ability to get through the C-gap when lined up against tight ends.

Watch below against the outside zone how Barrett once again uses his arms and hands to fight off the right tackle and get in on the stop.

Below, with double tight ends to his side, Barrett once again disengages. However, you would really like to see him get there a tick sooner and more importantly, finish the tackle. This run goes for about 8 yards when it should have gone for 3 or so.

A nice dip and bend for a sack here against Kouandjio. He runs good here on his inside half. Roughly a 3 second sack. A little more muscle and flexibility and he almost looks like James Harrison right here.

Lined up below at left defensive end, Barrett once again doesn’t get off quick at the snap but he beats a lunging, flat-backing right guard through the B-gap for an easy run stuff.

Here is a still of that last play to show the ball already snapped and Barrett still with his right hand in the dirt. 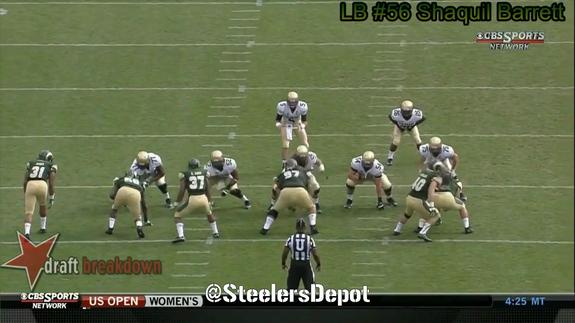 Here is an example of Barrett in coverage on a slot receiver. He carries up the field OK for the first 8 yards, but is no match for the break outside. He won’t be asked to do this too much in a 3-4 and it’s a good thing. He seems to do fine with his zone drops out into the flat, however.

Frozen here on the fake to the running back, Barrett gives up outside contain and it results in an explosive play.

Here, Barrett is lined up inside as a defensive tackle and you hate to see him lead so much with his shoulder, which in turn has him turned completely towards the sideline. He does recover and disengages quickly for the stuff, but that is mostly a result of the good play by the defensive end.

One of his better get-offs here below against the UTEP left tackle Brander Craighead complete with a dip and rip for a sack/fumble. Craighead is listed at 6’7″.

If you haven’t heard much about Barrett until now, you certainly will soon. There is no way that he is a seventh-round prospect like some are claiming he is. I would like to know if he was asked to play at 260 because he was a hybrid defensive end/outside linebacker as I really think he could drop about 10 pounds and add a little definition. I really don’t expect Barrett to set the world on fire with his times at his Pro Day. He is, however, a football player and according to Joey Porter, he is a student of the game. Watch his tape and he will grow on you.

The Baltimore Ravens drafted Ohio State linebacker John Simon in the fourth-round last year and when the dust finally clears, that is right about where I expect Barrett to come off the board. In my opinion, he would be a perfect fit for the Steelers and any other 3-4 team as an outside linebacker.

Games Watched: at Alabama, vs Colorado, vs UTEP