– Reaches that speed quickly, not a build-up runner

– Splash-play producer and dangerous in the open field

– Good vision and follows his blocks, capable of reading the flow of the defense

– Not much wear and tear

– Short and frame isn’t anything to get excited about

– Not a powerful runner

– Tends to go down too easily

– Dances too much, runs too lateral, especially outside of the box

– Minimal effort/ability as a pass blocker

– At times, carries the ball too freely away from his body

– Limited workload, never been the workhorse

– Virtually no use as a receiver

– Only 14 career starts over two seasons, leaving early as a junior

– Showed explosiveness at the Combine, position highs in vertical and broad (41.5 and 11’2)

– Originally committed to Oregon, redshirted there in 2010 before transferring to Baylor, sitting out the 2011 season

The explosion Seastrunk showed at the Combine carries over to the tape. Maintains speed through his cut, gets to the edge, and has the speed to turn the corner and dive into the end zone.

Shows it again in the bowl game against UCF.

Sees the field well as a running back. Sees the flow move to the right (from the back’s point of view), plants, cuts back, and then accelerates upfield. Makes the safety miss and finds paydirt.

Looking at that play again in photos. 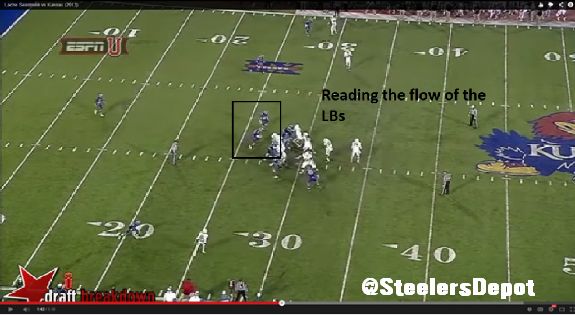 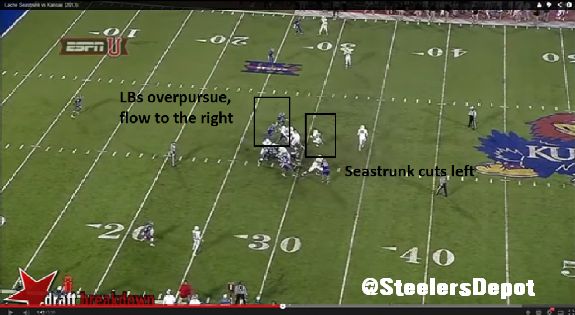 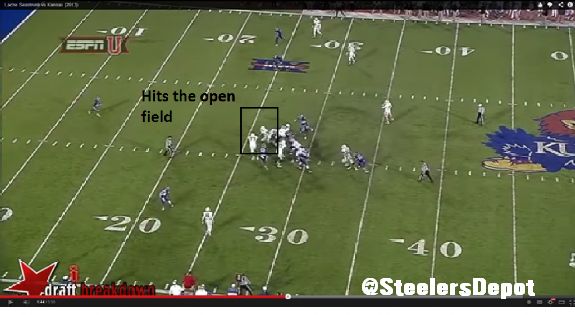 If the Steelers’ stick with the zone blocking scheme, that may be the most important trait to look for. ZBS is not just about following the hole called in the huddle. It’s reading the hat of the defender and adjusting accordingly.

However, Seastrunk does tend to run too laterally. Especially in the open field. Inside the box, he’s decisive and hits the hole. But put him in space, or when the play breaks down, and he goes East/West.

This was a first down run on 3rd and 8 that showed change of direction and balance but I have no clue what he’s trying to accomplish around the 15 yard line. Basically runs straight down the line instead of downhill. Something I’d expect out of Jonathan Dwyer. That’s not a compliment.

Play breaks down but Seastrunk doesn’t do it any favors by dancing around and losing even more yardage.

Holding him back substantially is rawness and ineffectiveness in the passing game. Poor, indecisive pass blocker.

Fails to support the right tackle getting beat around the edge by the left end. Deer in the headlights.  Just stands there and watches.

Doesn’t provide much help in this instance, either.

Seastrunk failed to catch a single pass in 2013. Has only caught 21 dating back to his senior year of high school. He did show soft hands in the Combine drills but that’s obviously a different environment. Biggest area that restricts rookie running backs from seeing the field is within pass protection and becoming an asset out of the backfield.

Seastrunk just feels unusually tight hipped for a player who is as explosive as he has shown to be. That probably sounds hypocritical and it’s a thought that is hard for me to quantify. Just feel it when I watch him. Cuts can be choppy in the open field and he just doesn’t feel natural. It could be a result of him running too high. Or maybe I’m completely misguided in that thought. Let me know what you think in the comments.

He played in an offense that divided up the carries. Was never counted on to be the workhorse. And the Bears’ scheme was very conducive to creating splash plays. Spread the field, take defenders out of the box, giving the running backs a lot of space. Luxury he won’t have in the NFL.

Mixed on him as a prospect. Do see the explosiveness and the speed. And none of the negatives standing alone is a deal-breaker. But together, and again going off my gut, I don’t see a top-tier back. Someone that feels like more a product of the Baylor scheme than true talent that can transition to the next level. It’s obvious that at best, Seastrunk will take time to develop because of that rawness in protection and out of the backfield. A prospect I feel like I have to talk myself into. Never a good sign even if it’s difficult to explain empirically.

Really have just began wading through this year’s running back class but if I had to guess, there are better mid-round options than Seastrunk.

Games Watched: vs West Virginia, at Kansas, vs UCF (Bowl)