– Slightly above average size but frame isn’t that noteworthy

– Some explosion and ability to close

– Plays the ball in the air well

– Speed not great but good enough

– Showed some toughness to play through injury

– Times where he shows aggressiveness as a tackler, playing through the hands to force fumbles

– As much experience as you could hope for

– Put on skates when stalk blocked

– Shy and hesitates to get his nose dirty against the run

– May play too tall in his pedal

Cockrell is a decent athlete who has some explosiveness and click and close. Does a nice job with the ball in the air. Competitive and aggressive on the ball.

Pass is thrown behind Mike Evans but Cockrell capitalizes by playing the pocket and knocking the pass away. Came on 3rd and 10, too. Get off down for the defense.

Another big play this time against Miami. 4th and 3. Cockrell, bottom of the screen in the following clip, reads the quarterback in zone, and closes to the ball quickly. Contests the throw and the pass falls incomplete effectively eliminating any hope the Hurricanes had at a comeback.

Am of course a fan of the starting experience. As much as you can want in a player. After redshirting as a true freshman, he grabbed hold of the starting reigns and never looked back. Just reading the tea leaves but a two-time captain and four time all-academic bodes well for his character.

Even after watching four games, I struggled to find many positives in his game. As weak as the 5th grader picked last in dodgeball (side note: that was me). Huge liability in the run game. Can’t shed and worse, gets washed repeatedly. Saw it in every game. Cockrell sporting #6 for Duke.

Evans gets some revenge, driving Cockrell back a good eight yards into the end zone.

Tackling Kelvin Benjamin in the open field is no small task, but a feeble attempt to bring him down. Benjamin scores easily.

Could be playing too high in his pedal, shown in the picture below, causing him to be a tad stiff in his hips. 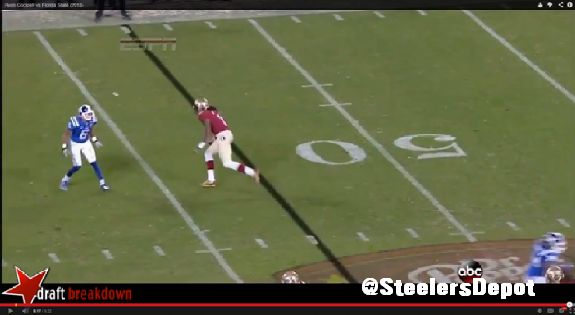 As I will always do, have to view Cockrell through the scope of what the Steelers want. The Steelers’ value three things from their cornerbacks.

1. Must be willing to support the run

3. Must be a reliable tackler

Cockrell doesn’t fit any of those requirements. What else he brings to the table is irrelevant….though that isn’t special either.

He doesn’t fit the bill of a Steelers’ cornerback but the player I look at next just might. Any guesses?