Evaluation of one of the prospects scheduled to visit with the team. UCLA outside linebacker Anthony Barr.

– Capable of winning with speed of the edge

– Flashes as a potent edge rusher

– Moments where he shows strong, active hands and a strong first punch

– Form tackler who can pack a punch

– Experience in a 3-4 as a standup rush linebacker

– Doesn’t always show the moves he has in his arsenal, somewhat raw, can get stuck

– Will over rely on speed/dip too much, still has to work at his repertoire

– Struggles against the run

– Doesn’t use hands well in run game, gets stuck

– Some possible questions about his motor/effort

– Dad, Tony, played fullback at Notre Dame and selected in 4th round of ’92 draft by Eagles

– Three uncles played in the NFL

– Missed senior season of high school with a broken ankle

– Ran for nearly 1900 yards as a junior in high school

There’s zero question Barr is a tremendous athlete and the big reason why he’s in the discussion to go early in the draft. Ran one of the top 40s and ten yard splits by a linebacker at the Combine (4.66, 1.56). Nobody heavier than him ran faster. Has a great first step and shows the athleticism that let him play in the backfield for his first two years.  Barr wore #11 for the Bruins and in all the following GIFs, is at ROLB.

Times where he shows hip flexibility and can dip around the edge. Though not nearly as strong, the way offensive tackles hold onto him is reminiscent of James Harrison. 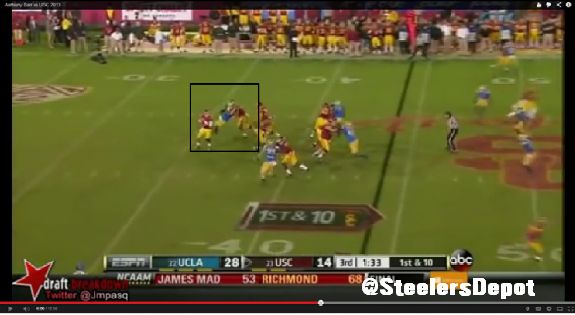 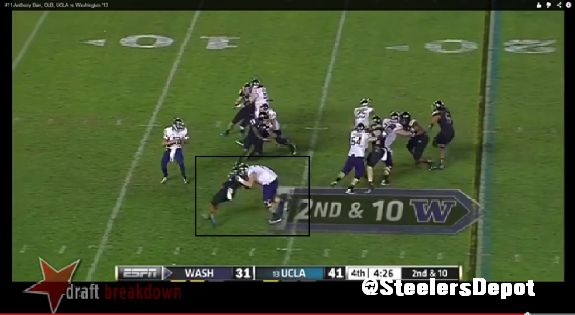 Long arms and at times, gets them extended and into the pads of blockers. Puts himself in control, a big key to winning at the next level. 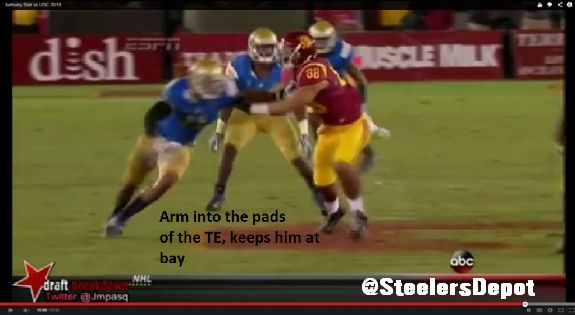 Moments that get me equally as excited is when he shows a strong punch, uses his hands well, and can win inside. Doesn’t get pressure with the guard doubling but knocks the left tackle off his base with a good punch.

Shows it again here with a better result.

But being that he’s only played linebacker for two years, it’s not surprising to see that he’s raw as a pass rusher. Don’t always see his moves on display. Has to consistently get skinny around the edge. Times where he is stiff and can get pushed upfield. Also, and this is probably the bigger issue, a lack of strength to avoid getting shoved up the arc.

Barr does need to get stronger to be effective in both phases. Against USC, his bullrush was easily anchored by the Trojans’ left tackle, a svelte redshirt freshman the senior should have been overpowered. Didn’t happen.

And there are times where his hands aren’t active and he relies too much on his first step and speed. Leads him to getting stuck.

This lack of strength makes him a liability against the run. Can get pushed around and doesn’t hold the point of attack well enough. Must use his hands better to get off blocks in the run game.

This one against Utah stuck out most. Trots behind the play the entire time. If he’s at full speed, there’s a good chance he makes the tackle.

The realization with Barr though is that he’s a guy still honing his craft. He’s only played linebacker for two years. And he’s spent that time standing up in a 3-4. Even if he wasn’t asked to drop into coverage very often, only six or seven times in the four games I watched, it’s valuable experience. Learning how to line up against different formations is one of the tougher tasks for conversion players and a large reason why they take time to develop.

He at least shows flashes of dominance as a pass rusher on tape. A lack of consistency isn’t surprising for a player so green. The important thing is there are moments on tape where you can look at him and say, “I know what he is capable of.”

Clearly, he’ll have to live in the weight room for a year to get stronger. Similar to Jarvis Jones in that sense though Barr is the superior athlete. But someone whose lack of strength will lead him to constantly getting pushed up the arc his first year.

Add some muscle some seasoning though, and Barr could become an impact player in 2-3 years.

While he does have a visit scheduled with the team, it’d be surprising if the Steelers’ snagged him at pick fifteen. With the starting outside linebackers set, there isn’t a reason to think they will spend another high draft pick on an edge rusher.

Games Watched: at Utah, at Stanford, vs Washington, at USC