A breakdown of one of the players the Steelers have brought in for a visit. Texas’ Jackson Jeffcoat.

– Uses his length well, getting his arms extended

– Some ability to disengage against the run and pass

– High football IQ, gets his hands up to bat passes down

– Sure tackler who can deliver a blow

– Very versatile, played all over

– Loads of production at Texas

– Hand usage is inconsistent, will go dead, causing him to get stuck as a pass rusher

– 33 career starts for the Longhorns

– Moved all over the field, hand up and down at both end spots

Jeffcoat’s best quality is his hands. When he’s using them, they’re quick, violent, and consequently effective.

Left guard barely gets his hands on him. Jeffcoat evades and helps take down the quarterback and force a fumble.

Beats the left tackle to the inside, generating pressure against Texas Tech.

Those quick hands also help him get off blocks in the run game. A must for a player that Jeffcoat that rarely wins because of his strength.

Fundamental tackler who can pack a pretty good punch.

Gets his nearly 34 inch arms extended into the pads’ of lineman. Picture of that extension on this pass rush. 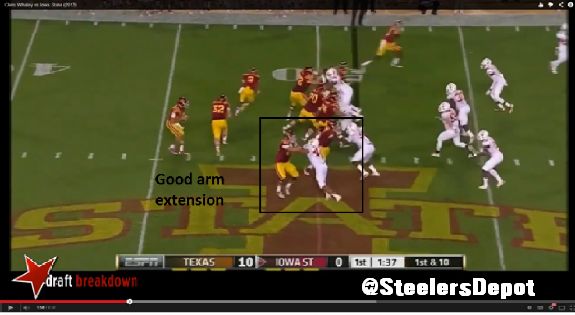 Unfortunately, Jeffcoat is merely an average athlete. Can’t get excited about him as an athlete or his explosion off the ball. When his hands go dead, he’ll get stuck as a pass rusher.

There are times even when he is hand-fighting, tackles have the lateral movement to stay square to him.

Lined up over the “A” gap, he gets pushed upfield by the guard. Lacking hip and ankle flexibility.

Right end in the clip below.

That one was particularly disappointing. Jeffcoat got to pin his ears back with Iowa State losing in the final minute of the game. Should be winning off the edge there. Can’t get skinny and the left tackle pushes him up the arc.

Back to the positives for a moment, it’s hard to argue with the productivity. Jeffcoat had a fantastic career at Texas. Having a father that thrived in the league doesn’t hurt, either.

Do project him to move to outside linebacker. As I’m sure you saw in the GIFs, Texas moved him all over the place. It appears that as the season went on, he was asked to stand up more. Played with his hand up and down at both end spots and stood up over the “A” gap a lot, especially against Texas Tech. Longhorns got creative using him on stunts and twists. Dropped into coverage probably 8-10 times in the three games I watched. But they were usually just shallow zones and he never had to flip his hips and run.

It’s a college career that will likely be much better than what he’ll have in the NFL. Speed and explosion isn’t something that can’t be significantly changed. If the report was flipped, a player with great speed but poor use of hands, you can work with that as a mid-rounder. Someone that can be coached up and molded. For Jeffcoat, there is a low ceiling and he may already be close to it. Don’t see a trait that defines him.

A deal-breaker, in my mind.

Games Watched: at Iowa St, at TCU, vs Texas Tech