– Soft hands and a natural catcher

– Plucks the ball away from his body, increasing catch radius

– Good body control and can contort self to make difficult grabs

– Tough, willing to go across the middle and catch in traffic

– Size makes it tough for him to be brought down

– Surprising balance and can pick up some YAC

– Length/size is an asset as a run blocker

– Came up huge in bowl games

– Experience as a return man

– Not a natural separator who tends to round off his breaks

– Slow at the top of his stem, trouble accelerating out of his cuts

– Will lose focus and drop the occasional pass

– At least one catch in 43 straight games

– Missed another because of a hamstring injury

Similar to Quincy Enunwa, Hoffman has soft hands and catches away from his body, even if you have to tolerate the occasional drop from him. By getting his arms extended away from his body, it gives him an even larger catch radius. Displays wonderful body control and capable of making some really difficult grabs. Type of receiver that makes a quarterback look good.

Top tap along the sideline.

Doesn’t actually wind up making the catch in the clip below but you again see the body control along the sideline and ability to pluck the ball out of the air.

Can see the extent of his catch radius in the picture below. 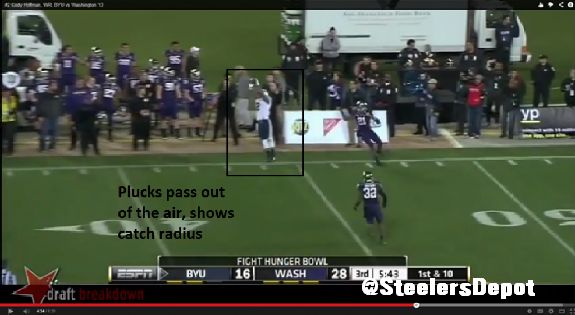 Hoffman has superb hand eye coordination, also aiding him in making difficult catches. That trait along with his hands and body control are all shown on this touchdown snag against Georgia Tech.

A screenshot of the grab shown on a following replay. 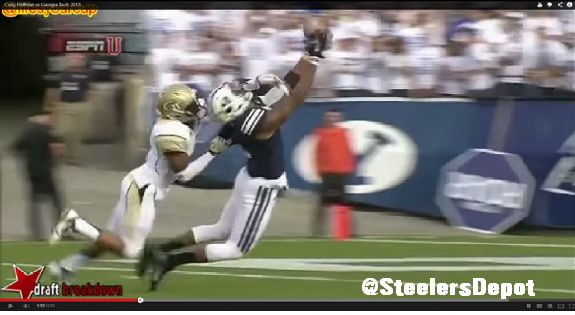 And as Steelers’ fans love to clamor for, yes, Hoffman is a valuable asset in the red zone. Catches this contested fade for a touchdown against Boise State.

Of course, have to love his production in big games. Don’t have empirical evidence but it stands to reason he’s the most productive receiver in December of the entire draft class.

But as I mentioned, will drop a pass here and there – much like Enunwa.

Crucial one down by seven against Utah with time running out.

The larger issue that looms of Hoffman is an inability to separate. Like a lot of tall receivers, he has trouble sinking his hips and getting out of his breaks quickly. Makes his route easier to read for cornerbacks and hurts the timing of throws, especially short/intermediate routes like digs and comebacks.

Here’s Hoffman lined up in the slot in the Cougars’ bowl game. Running an out, you can tell he’s slow out of his break. Throw ends up being out in front. Though some blame still falls on the QB, it illustrates my point just the same.

In the red zone working in confined spaces, he has difficulty getting much separation. Too tall in his cut.

Struggled statistically from where he was at his junior year to his senior year. Receptions, yards, and touchdowns all fell fairly drastically. BYU did pass slightly less in 2013 but Hoffman had the benefit of starting each game with the same quarterback. Three different Cougars’ lined up under center in 2012.

Didn’t workout well at the Combine or his Pro Day. Somehow ran worse at his Pro Day than Indy, something virtually unheard of. Turned in a 4.65 at the Combine while reportedly running a 4.67 and 4.7 flat at BYU’s Pro Day. Had the worst vertical at his position at Indy of 27.5 inches. By comparison, a whopping nineteen offensive lineman posted equal or better verticals. That was a number that was only marginally increased at his Pro Day, bumping up to 31 inches.

Fortunately, Hoffman does play better on tape than in shorts.

Having said all that, his ceiling is limited. There’s a lot to like about his game but I don’t see him rising above being a possession receiver. That connotation is worse than what it probably should be, but he’ll never become a team’s #1 receiver. At best, a solid “Z” receiver who can refine his blocking and move the sticks on third down (15 of his 17 third down receptions did so in 2013).

Someone worth looking at in the later rounds but I’ll take a player like Enunwa over Hoffman. Bit more explosion and upside.

Games Watched: vs Utah, vs Georgia Tech, vs Boise St, vs Washington (Bowl)