A breakdown of another top cornerback trying to sneak into the first round. TCU’s Jason Verrett.

– Fluid hips, transitions from one phase to another with ease

– Lots of lower body strength for the position

– Explosive with fantastic ability to click/close on the ball

–  Tracks the ball in the air well, can play the pocket of the receiver, very aggressive

– Willing and adequate tackler who can support the run

– Experienced in playing man and zone, skillset will let him play in either

– Productive with numerous accolades and a great senior campaign

– Trusts self too much in coverage, over-aggressive, and doesn’t flip out of his pedal at times

– May be too high in his backpedal

When you talk about Verrett, it starts with his athleticism. Ran a 4.38 and jumped 39 inches at the Combine. Apt in coverage. Similar to Darqueze Dennard but Verrett is definitely the better athlete. Much more explosive. Aggressive in coverage and repeatedly made plays on the ball.

In the clip below, Verrett is able to maintain speed while getting his head around, locates the ball, and swats it away.

Love this following play. Flips his hips almost immediately as the wide receiver chops into his break, has the lower body strength to quickly break on the ball, and shows the aggressiveness to dive in front of the route and knock the ball away. Verrett’s click and close is excellent and he rallies to the ball in a hurry. Really impressive.

Although he isn’t a special or forceful tackler, he gets the job done. Don’t think I saw him miss one in the four games I looked at.

Brings down the listed 264 Blake Bell in the open field.

Biggest knock against him is an obvious one. He’s tiny. Like Victor Hampton, he wants to be physical but can get bullied and pushed around.

LSU receiver probably getting away with a push on this dig but has the strength to push Verrett away, making the catch.

Against Texas, he tries to press but is pushed away and is forced to recover. Has the recovery speed for moments like this but he looked more like a ragdoll than corner. 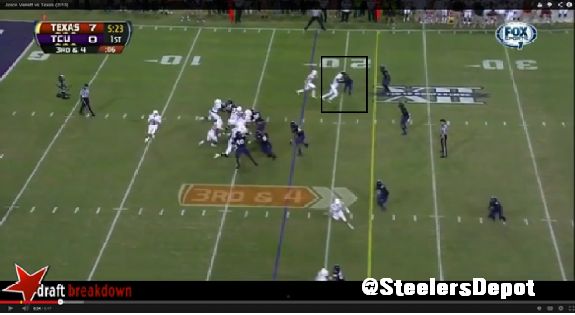 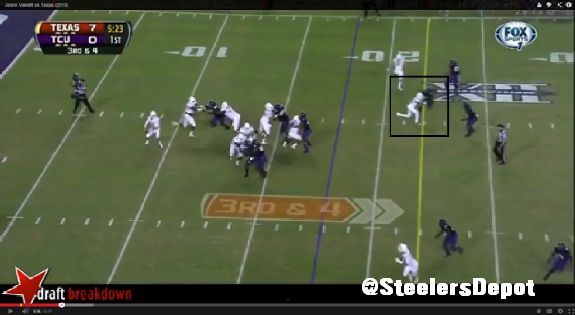 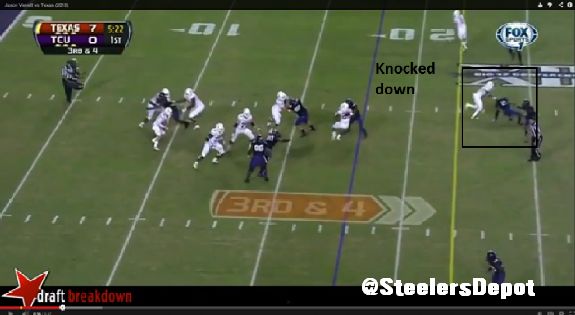 His aggressiveness is a blessing and curse. Allows him to make plays on the football but there are times where he opens the gate way too late and can get burned.

Cornerback at the top of the screen. Throw doesn’t come his way but he never opens his hips despite the receiver eating up his cushion. It’s Cover 1. There’s no help over the top. Have to flip and protect anything vertical.

Happened again later in the Texas game. This time, Verrett allows the catch. Gets caught peeking in the backfield the receiver blows past. Throw is on the money and there’s no way for Verrett to make a play on it because he’s trailing.

Could be picky here but times where I’ve seen his pedal too high. Perhaps trying to compensate for his lack of height. 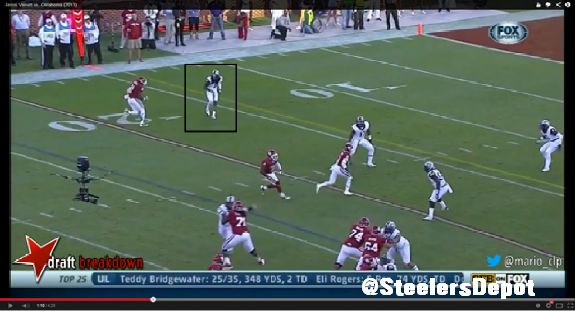 Verrett attempted to avoid surgery and rehab his shoulder but ultimately went under the knife about a month after the Combine. The fact he was still able to work out and play through it most of 2013 shows it’s relatively minor. He will be sidelined for a little while but is in his best interests long-term.

His numbers may be slightly down from his junior year but it’s easily explained by teams throwing away from him after a stellar 2012. The fact he still recorded 14 breakups shows just how good in coverage he is. Chances were limited.

Verrett is a better fit than Dennard. He has the explosion and click/close that’s required for a cornerback under Dick LeBeau. That ability to break on the ball will be a huge asset breaking on underneath routes when protecting against the deep third.

He won’t get to be as physical but that aggressive mindset is what the Steelers are looking for. I’m not convinced the Steelers will take a cornerback in the first round but if they do, 15 is a tough spot to take the Hornfrog. Conventional wisdom says that’s too high and it’s doubtful that he will fall into round two. Trading back is a nice idea but easier said than done when seemingly every team wants to trade down and no one wants to move up.

Keep in mind this is without much study of the other top cornerbacks, Fuller/Gilbert, etc, but I’m usually of the mindset of going against that “convention” wisdom. Often times, what is the norm in the media and for teams are different. The media is always playing catch-up to what teams thinks. It’s not a change in opinions from teams as it is the media having to wade through the smokescreens.

The specific point being Verrett could “shoot up” the boards in the next few weeks, making 15 an acceptable selection.

The talent is sure more than acceptable.

Games Watched: at LSU, at Oklahoma, vs Texas, vs Baylor