Another look at one of the “big three” at quarterback. Texas A&M’s Johnny Manziel.

Repeating what I wrote in the Blake Bortles’ article. Clearly, the Steelers’ are not in play for Manziel or any of the top tier quarterbacks. As it says in the first paragraph, these reports are also dedicated to top players in the draft. Please hold your “article is pointless” comments.

– Plus arm he puts a ton of trust in

– Lots of velocity on his throws, ball comes out in tight spiral

– Able to keep plays alive with his feet and a true dual-threat, supreme runner

– Flashes of brilliance when his game comes together

– Able to throw from nearly any base

– Overall, accurate, even with an unsound base

– Shows accuracy on the move

– Fiery and emotional player, wears his heart on his sleeve, seemed to be a leader on the field

– Didn’t have an issue with passes being batted down

– Poor weight transfer to his front foot and base is often too narrow, will throw off back foot

– Front leg tends to lock up

– Relies and has an overconfidence in his arm

– May not always be getting full arm extension on his throws

– Eyes/feet not synched up, on “tape delay” when asked to go through his reads

– Funky arm angles at times, will drop to a side arm

– Sometimes hangs in the pocket but preference is to run

– Tendency to bail out at first sign of pressure, fall backwards than climb or slide

– Playing style lends itself to taking some unnecessary sacks

– 5116 yards of total offense as a freshman, SEC record and first player in NCAA history to have 5000 total/1000 rushing in a single season

– First freshman ever to win Heisman

– Investigated for signing autographs for money before start of 2013 season

– Suspended for first half against Rice in 2013 as punishment

– 5-6 record vs ranked teams in career

For his small statue, Manziel has a plus arm. His velocity is better than his pure strength downfield. Guy can really rip it while still showing accuracy. Despite not stepping into this out route as wel as he could, it’s on the money.

Proper ball placement on this back shoulder throw. Away from the defender where only his receiver can make a play on the ball.

Of course, getting to throw to Mike Evans is always a bonus.

Like Bortles, he shows impressive accuracy on the move. Accurate even when rolling to his left as a right-handed QB. With his penchant for running around, his ability to throw from any base is critical. Playing behind a poor offensive line won’t bother him.

As everyone knows, he’s a playmaker. Absolutely electric. Ability is something out of Tecmo Bowl.

Hundred examples of that out there, go consult your local highlight reel for evidence, but I’ll leave you

with one of the most impressive. TD pass against Duke in the bowl game. Football’s version of the

“Wow!” signal because I literally just wrote “Wow” in my notes.

The size is a negative but isn’t affecting his draft stock. Teams know he is short. Not eclipsing the six foot mark is irrelevant. Teams that liked him knew he was undersized and being a quarter inch under six foot won’t change that.

His biggest negative is how he takes care of the football while running or scrambling. It’s enough to make a head coach ill. I present you a montage. 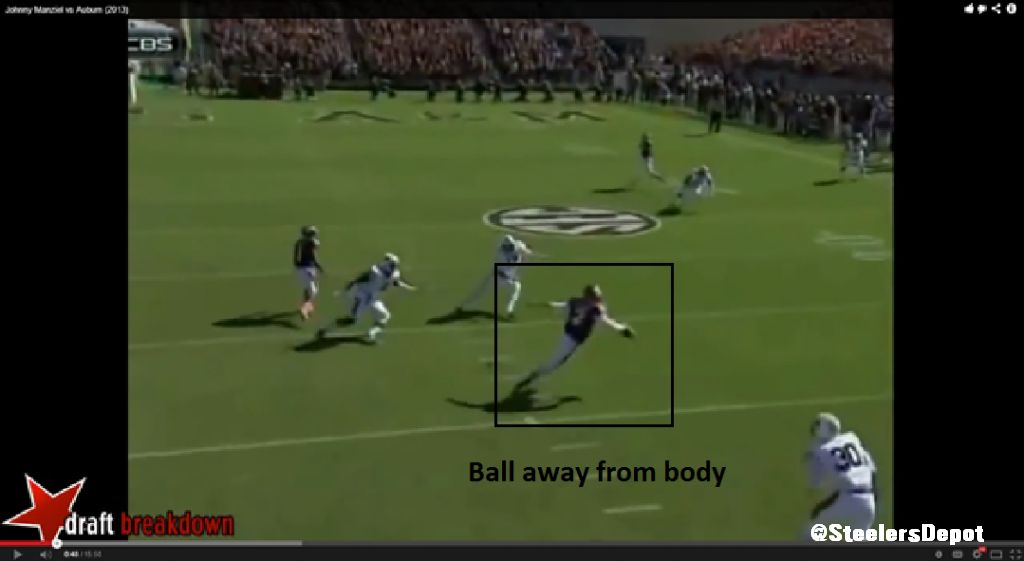 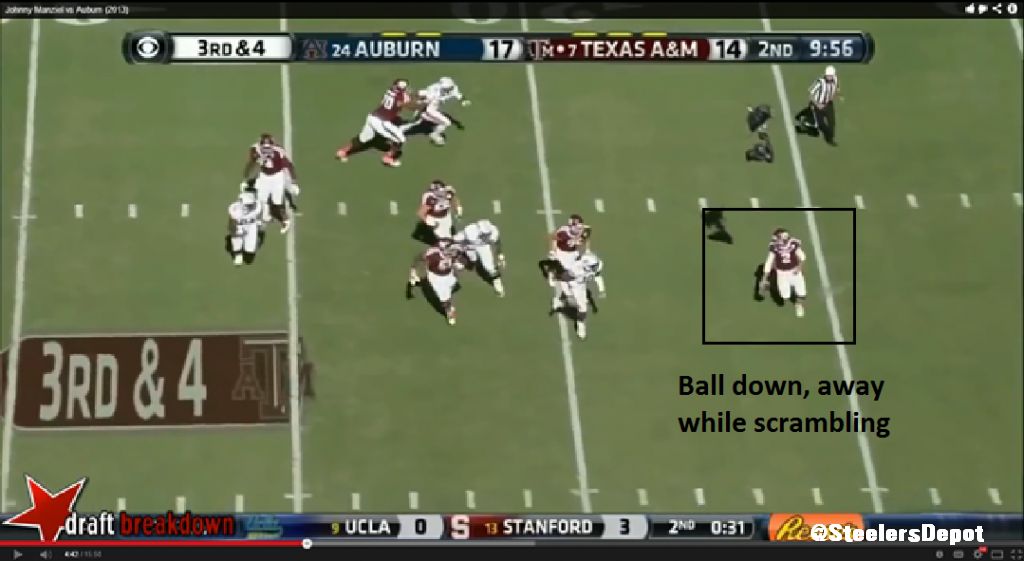 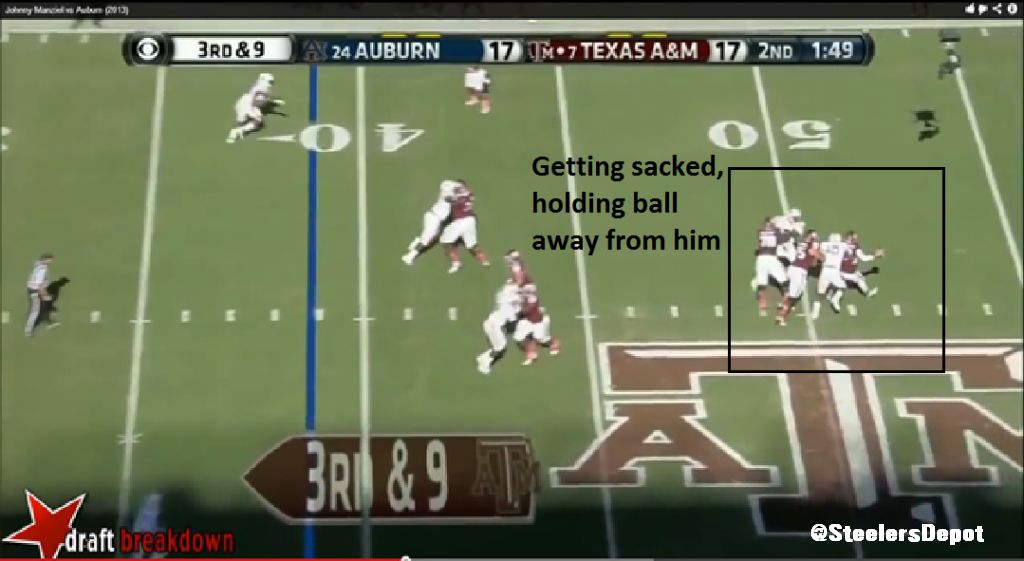 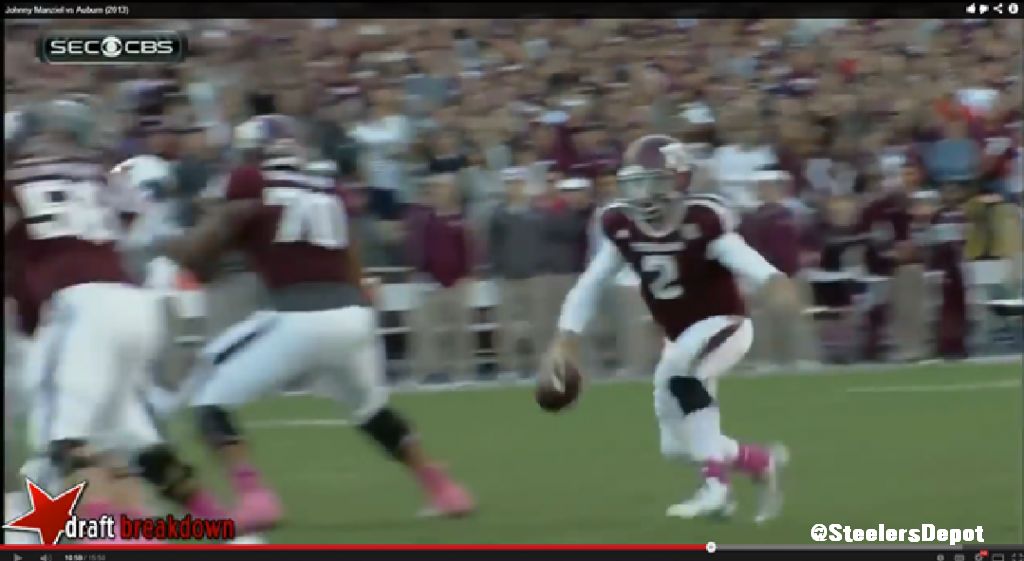 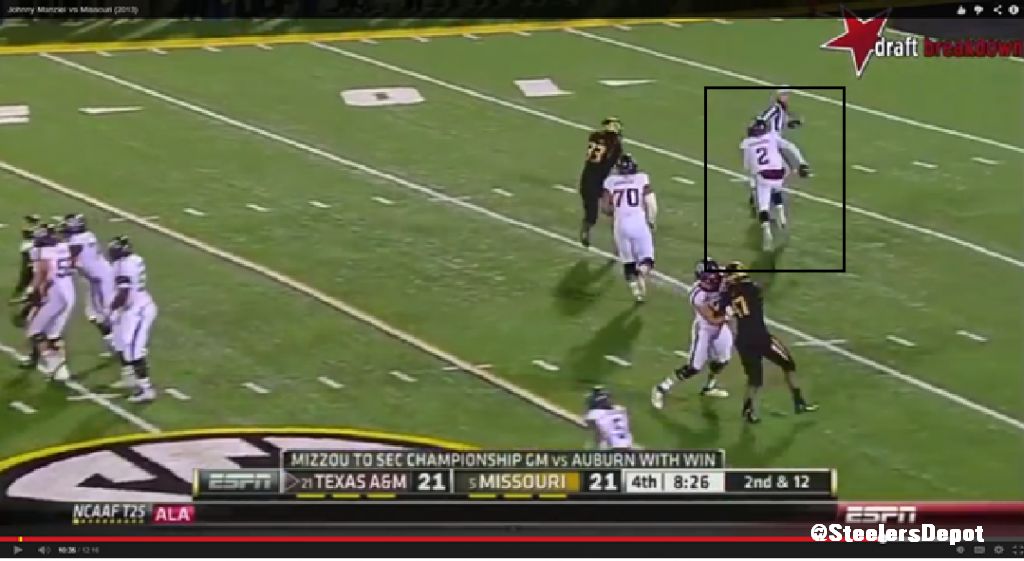 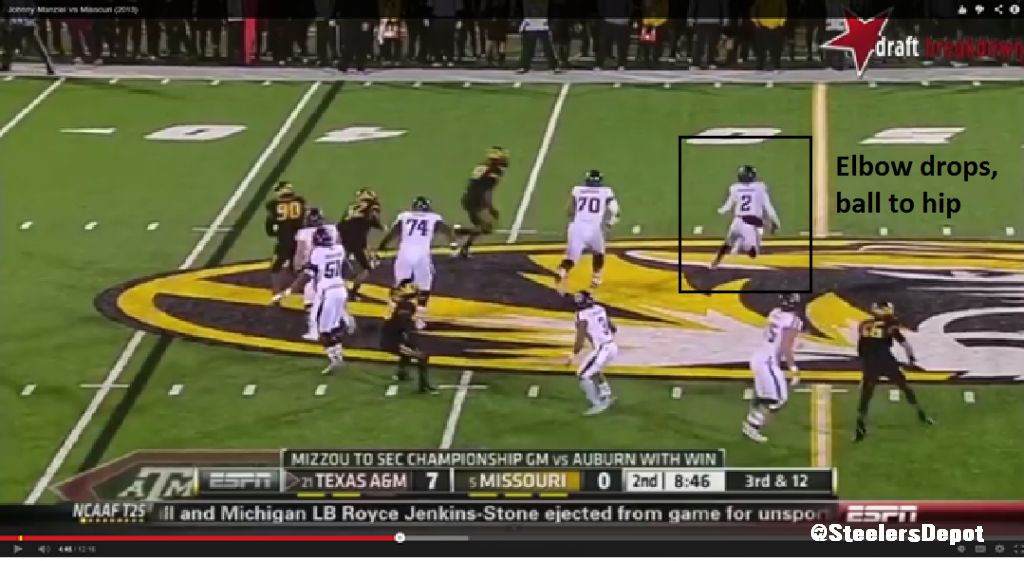 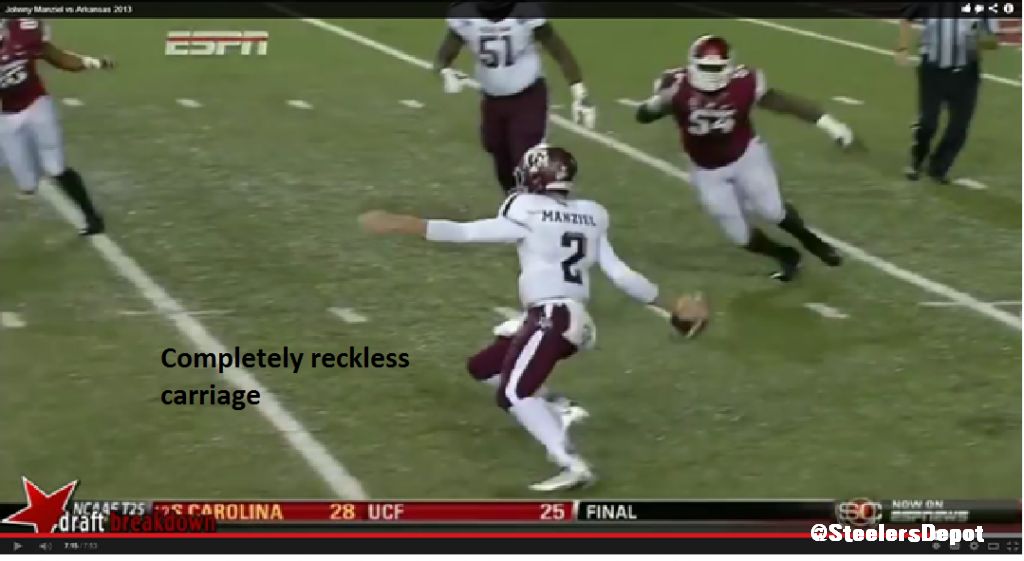 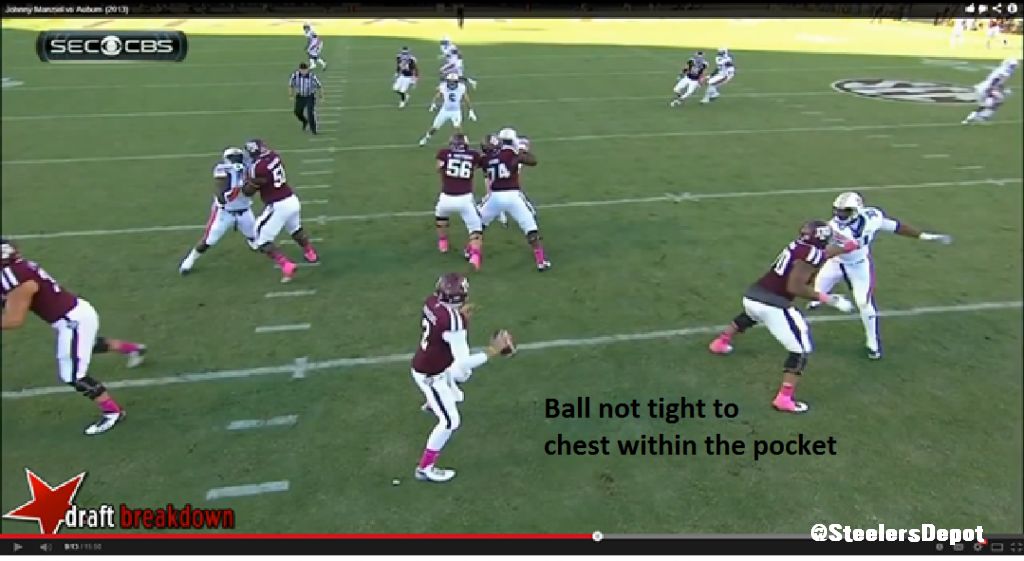 He didn’t fumble once in the four games I watched but with that style, it’s going to happen at the next level. Defenders are going to feed on a player that still holds the ball away from his body as he’s being wrapped up.

The other negative is when he goes to throw, there’s wasted motion in bringing the ball up from his waist. 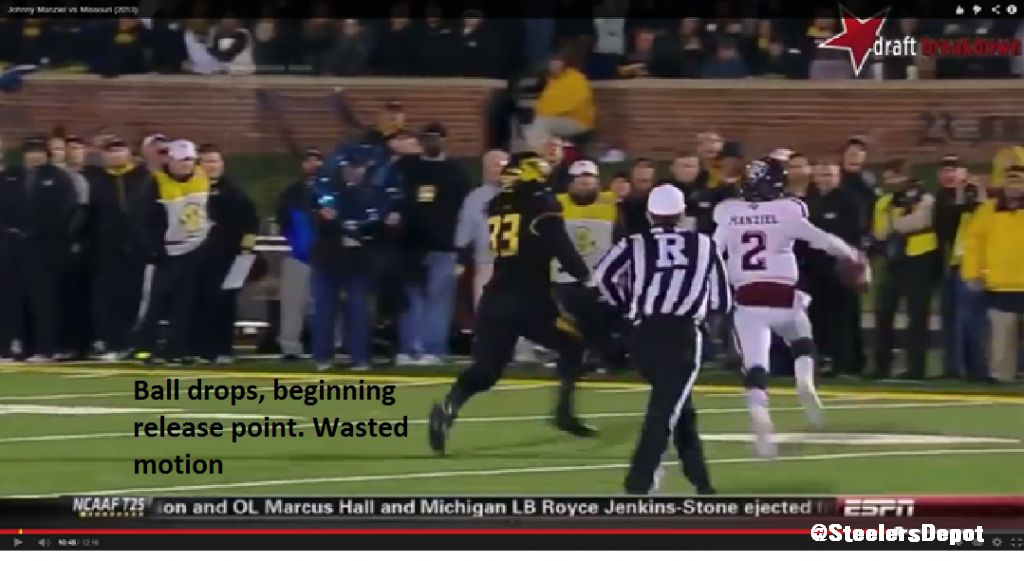 In the pocket, when his carriage is correct and the ball high and tight to his chest, Manziel does have a quick release. Has to show that outside the pocket, too.

Mechanically, he’s a mess. I’m not asking him to be Peyton Manning and be borderline OCD to the details of the position, but he’s almost at the other extreme.

Front leg locks up. Perhaps partially a product of him trying to gain every inch he can to see over the line of scrimmage. Affects accuracy and ability to drive the ball as well as possible. Also as you’ll see in some of the stills, his base is narrow. Also affects velocity. 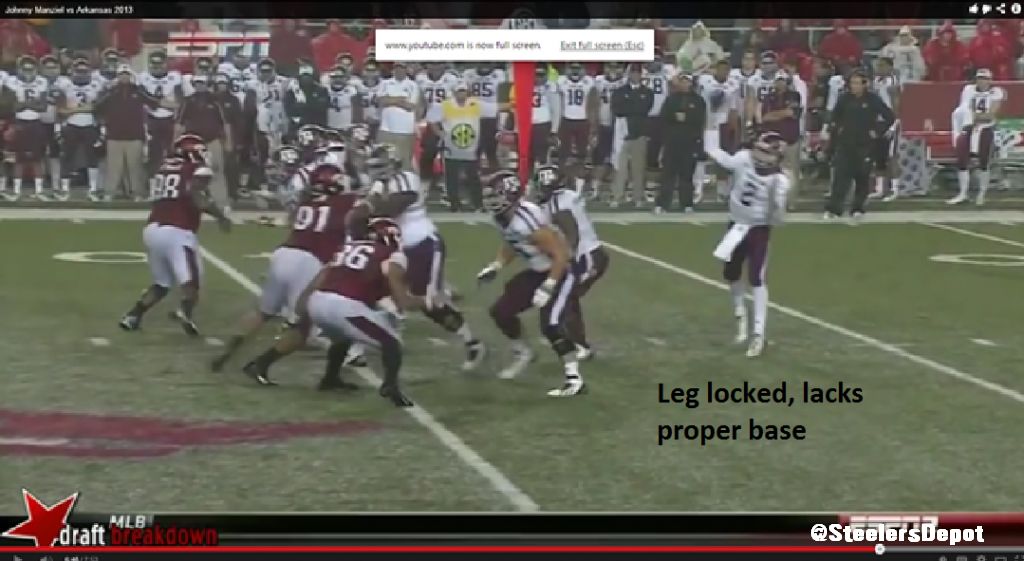 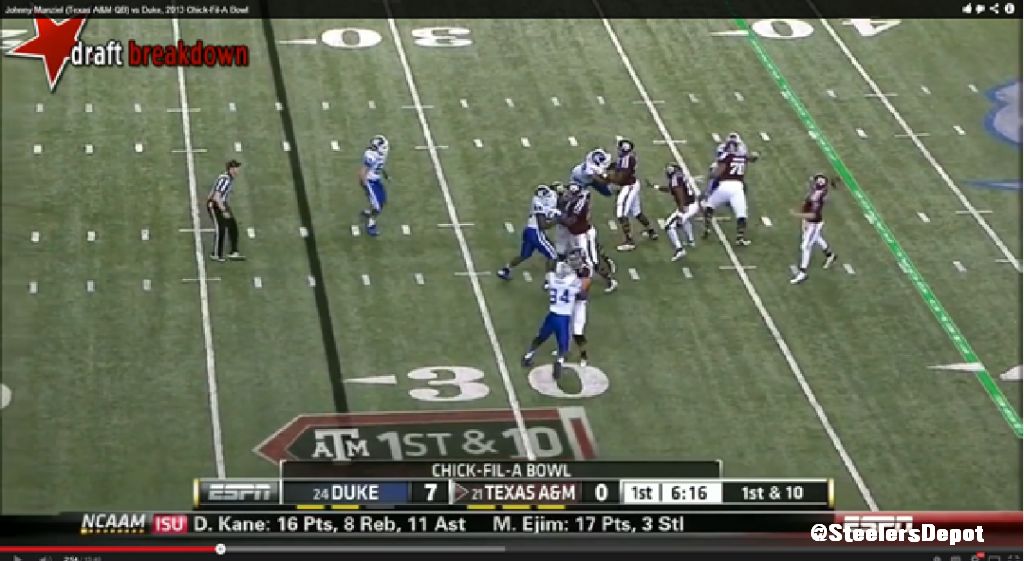 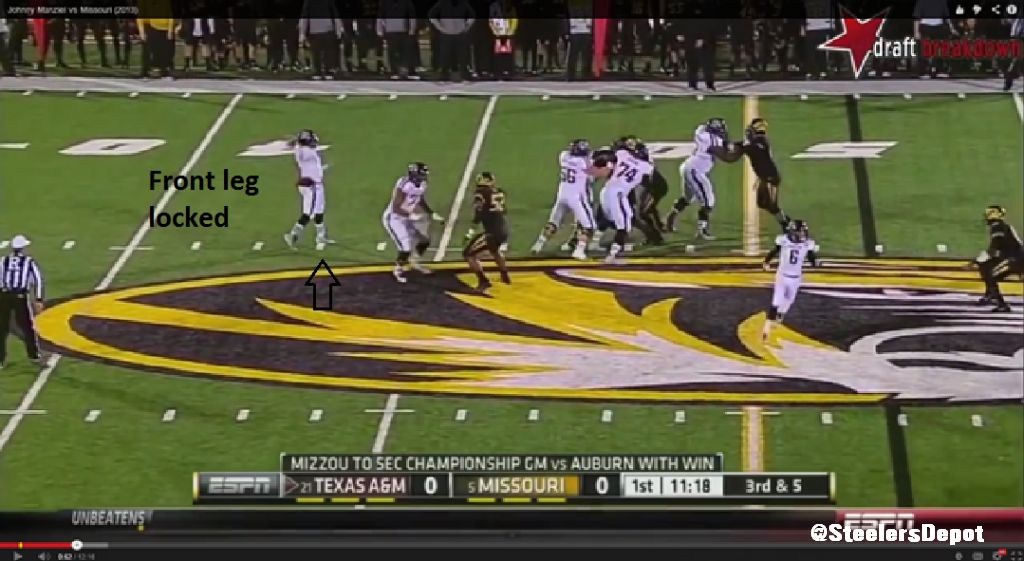 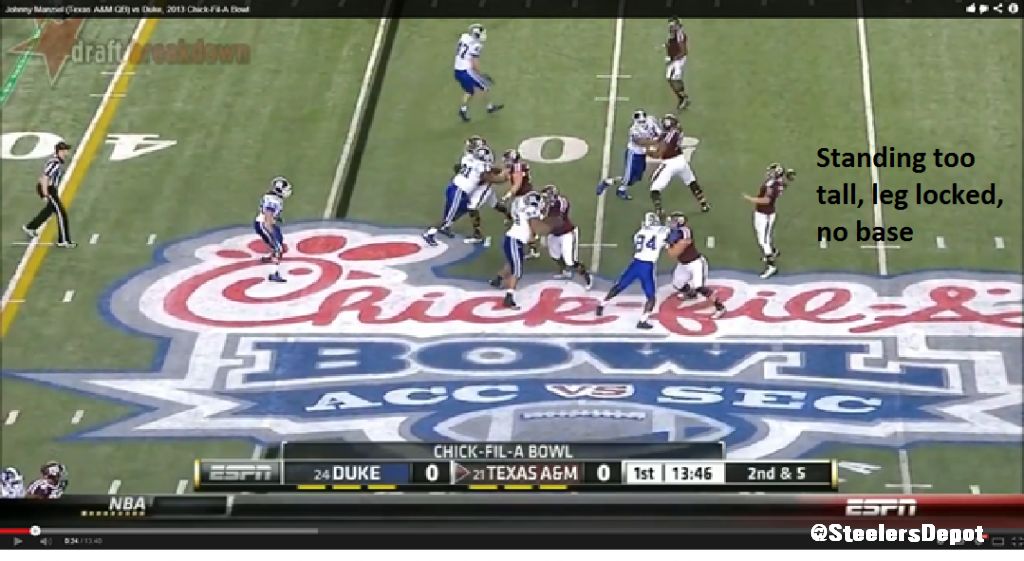 Feet are on “tape delay” with his eyes. Not in sync. Delay from his eyes going to his next read and his feet moving. Example below.

Starts looking down the right sideline. 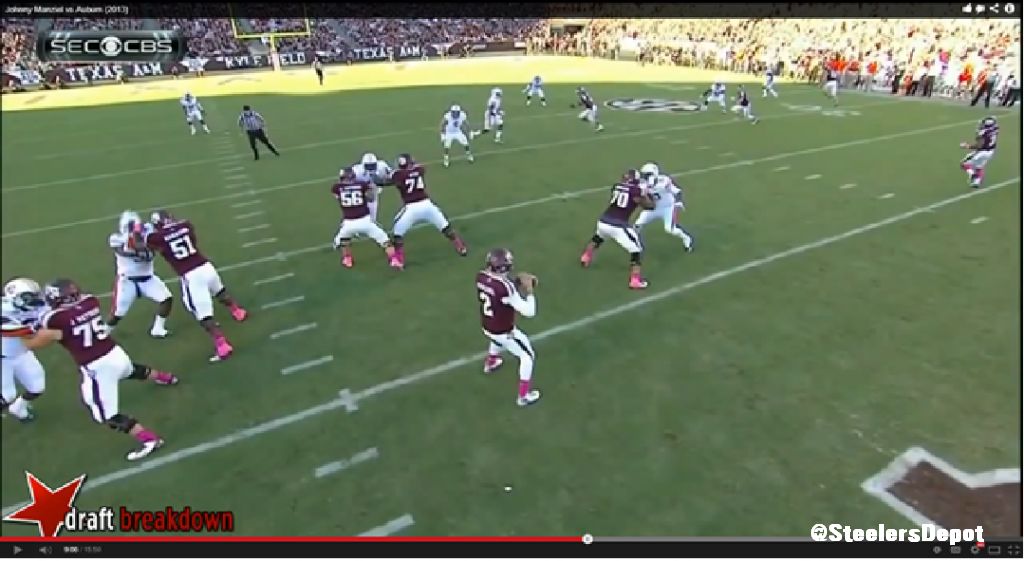 Then looks to his left. Feet still pointed to the right though. 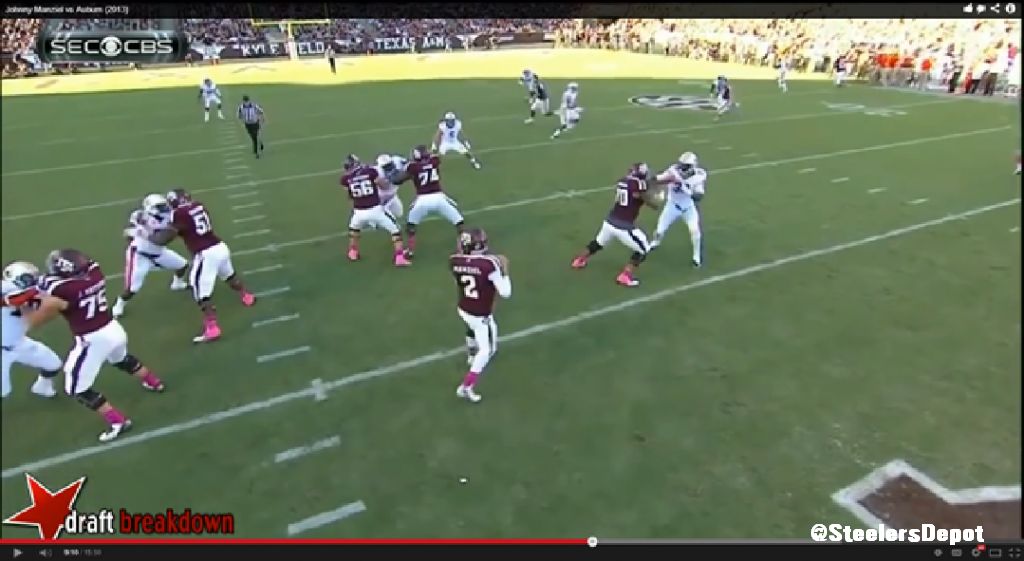 When his feet finally point to the left, his head is already turning back to the middle. 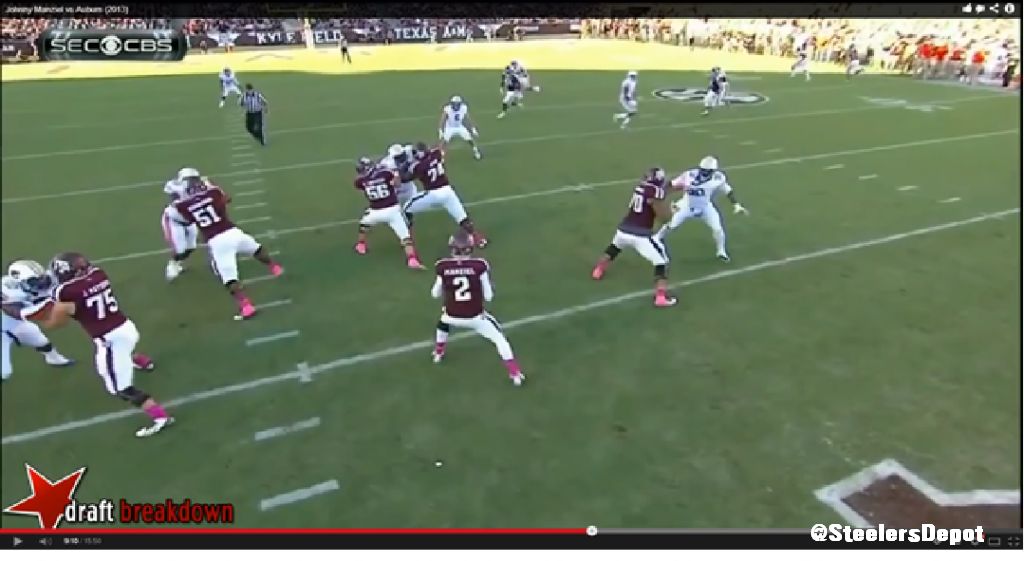 And then his feet come back to the right. 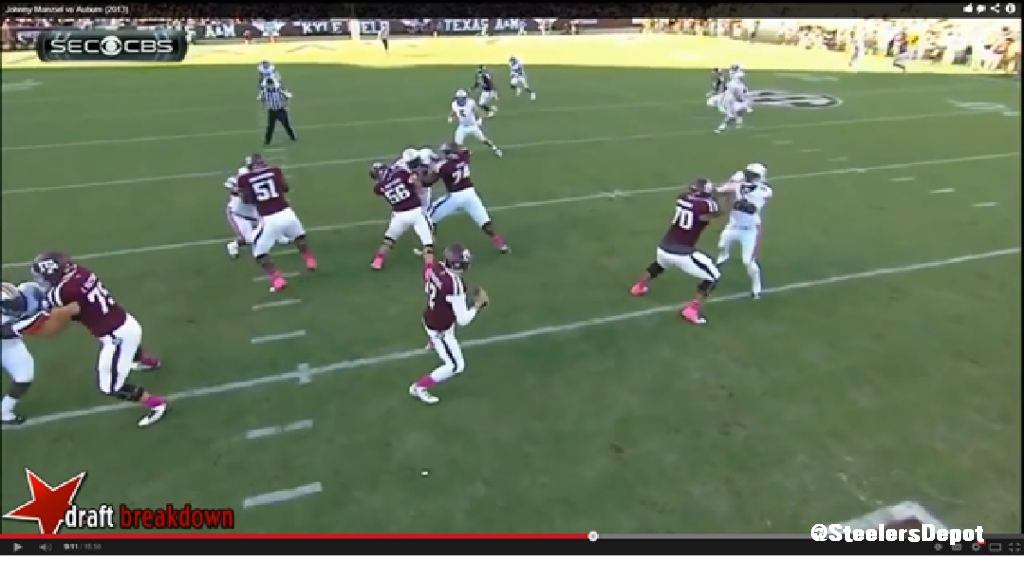 Maybe nitpicking or seeing zebras but sometimes didn’t get his elbow fully extended on throws, especially outside the pocket. 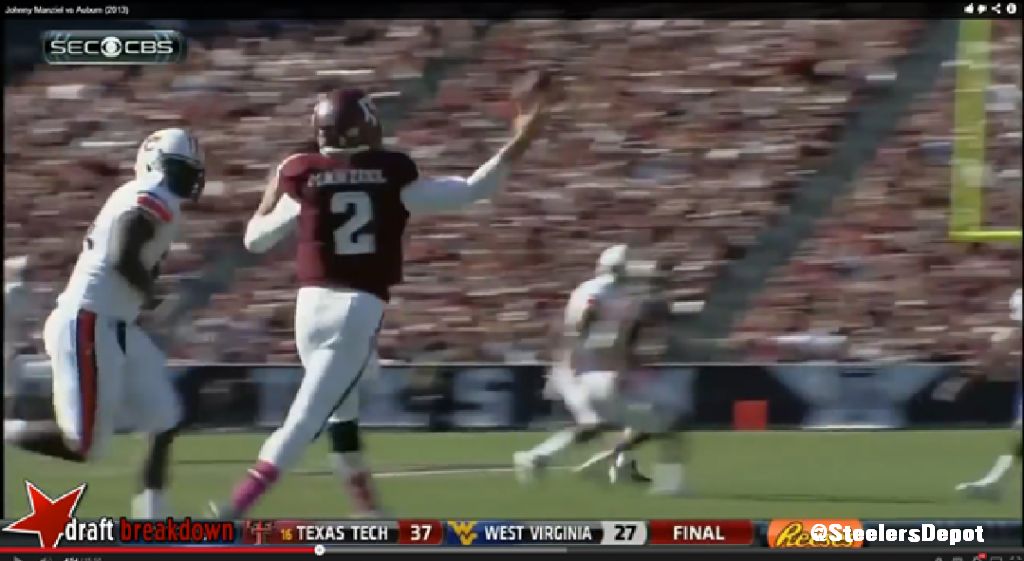 For a player that is short, his pocket presence is going to be critical. For him, being able to slide in the pocket and create throwing lanes was something I wanted to look at before watching Manziel. Unfortunately, didn’t see a ton of it.

Here, when he clearly can climb, he rolls out, lets the defensive end have an easy route to him, and is forced to chuck the ball away.

Late in the game against Auburn, the Tigers blitzed. Aggies pick it up without an issue but Manziel seems to perceive the pressure anyway. Throws the nine route off his back foot, the ball hangs, and is nearly intercepted.

Again, misses chance to climb (still below) and takes a sack because of it. 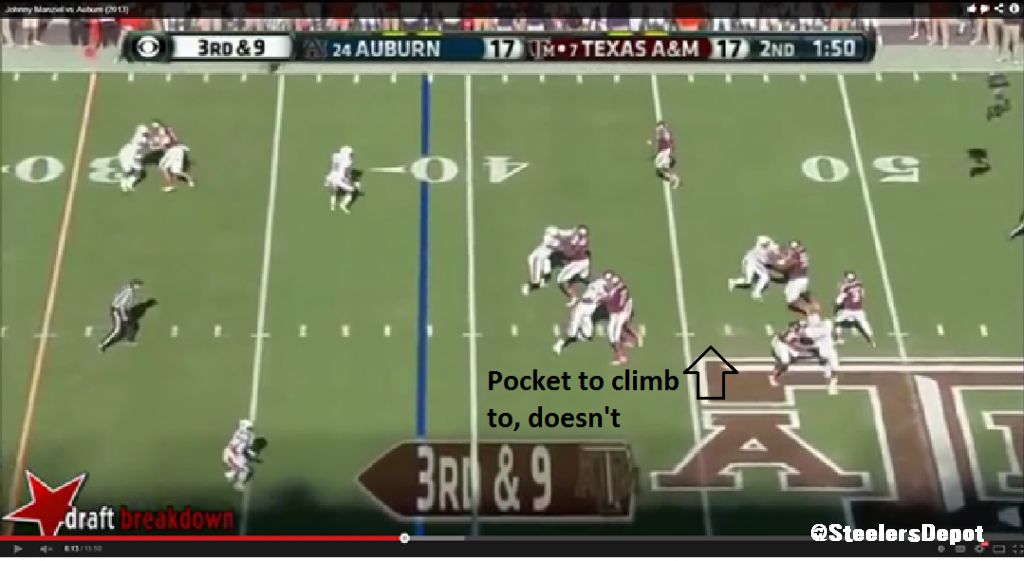 Obviously, there’s the character concerns. The partying. The on-field brashness. Some see it as a personality that will never change. Others, a dumb college kid doing dumb college things. Impossible to know the truth based on anecdotal evidence. Those that have been around him a lot and gotten the chance to talk to him are the only people that can make a true evaluation. I’m not one of those people.

Darren Page summed up my thoughts on Manziel in a Tweet the other day.

“I seem to be able to talk myself into him more between times when I watch him. When I watch, I can’t do it. That’s why I can’t rate him high.”

For a player to be deemed franchise, especially a quarterback, I shouldn’t have to mentally talk him up. I never wavered or second guessed what I saw from Andrew Luck. I’m not wavering much in how I feel about Blake Bortles. There’s a big list of negatives with Manziel that make me wonder if he will be a franchise player.

Which is disappointing because the talent is immense. He’s succeeding even with so many issues. His arm is good enough that he can throw off his back foot and the ball can still be on the money.

Just too risky for me to consider him a franchise quarterback. Even though some team will come May.

Games Watched: at Arkansas, vs Auburn, at Missouri, vs Duke (Bowl)